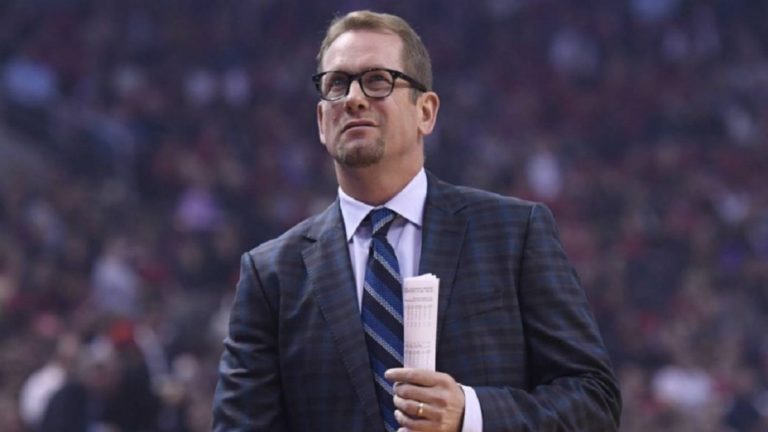 JEFFERSON, Iowa – A small, yet spirited crowd of friends, family, locals and proud Iowans filed into the Wild Rose Casino outside of Jefferson to celebrate the accomplishments of Carroll native and Toronto Raptors head coach Nick Nurse.

Prior to the event, Nurse met with a handful of reporters to discuss life after winning an NBA Championship for not just a franchise, but for an entire country, as the Raptors became the first team outside the United States to win an NBA Championship when they defeated the Golden State Warriors 4-2 in the 2019 NBA Finals.

“The last two weeks since we won it have been the busiest two weeks of the whole season,” Nurse said. “Its been a lot of celebration, a lot of smiles, a lot of hugs, a lot of hi-fives walking down the street and lots of well wishes.”

Nurse, the youngest of nine siblings, also said he attended a family reunion while he was back at Iowa in at his parents house located just outside of Churdan, a small community of 369 people located nearly 15 minutes from Jefferson in rural Greene County.

Iowa was a place where Nurse always knew he had support in, whether it was coaching the NAIA Grand View Vikings, the Iowa Energy, or even when he was thousands of miles away coaching in the British Basketball League. But he never expected to have a whole country in his corner like Canada was for the Toronto Raptors.

Nurse also discussed the pending free agency of Raptors forward and NBA Finals MVP Kawhi Leonard, who as of Sunday Night had yet to announce a decision for who he would play for next year.

“I think we have a really good chance [of re-signing Kawhi Leonard], I think he had a tremendous year,” Nurse said. “Its a great place, you guys can see our fans and our ownership is great, our front office leadership is great, everything went really well to re-sign.”

Doors opened at 5 p.m. and the event began at 6 p.m. and was emceed by Iowa radio play-by-play broadcaster Gary Dolphin. A host of close friends and colleagues showed their support of the former Carroll Kuemper superstar, who even donned a Carroll Kuemper Knights jacket once worn by his high school head coach, IHSAA Hall of Famer Wayne Chandlee.

There were also a handful of special presentations as well, including one from one of the Nurse brothers, UNI Athletic Director David Harris and Iowa Governor Kim Reynolds, who declared Sunday “Nick Nurse Day” for the entire state of Iowa.

There were many a laughs to be had throughout the event, many came from Steve Forbes and Mike Finger with great stories and anecdotes about Nick Nurse. But, even the old ball coach in Wayne Chandlee was able to get some big laughs out of the audience.

Perhaps the most poignant moments of the night was when speakers would allude to the late mother of Nick Nurse, Marcella Nurse, who passed away in December 2018. Those who spoke of his late mother often spoke of her generosity and her ability to make anyone feel at home, something any son would be appreciative to hear.

As the night ended, Nurse finally took to the stage and told the filled ballroom that to this day, his favorite job he had ever had was coaching in Des Moines as head coach of the Iowa Energy and thanked everyone who had touched him and helped him along the way to where he is today: A World Champion.