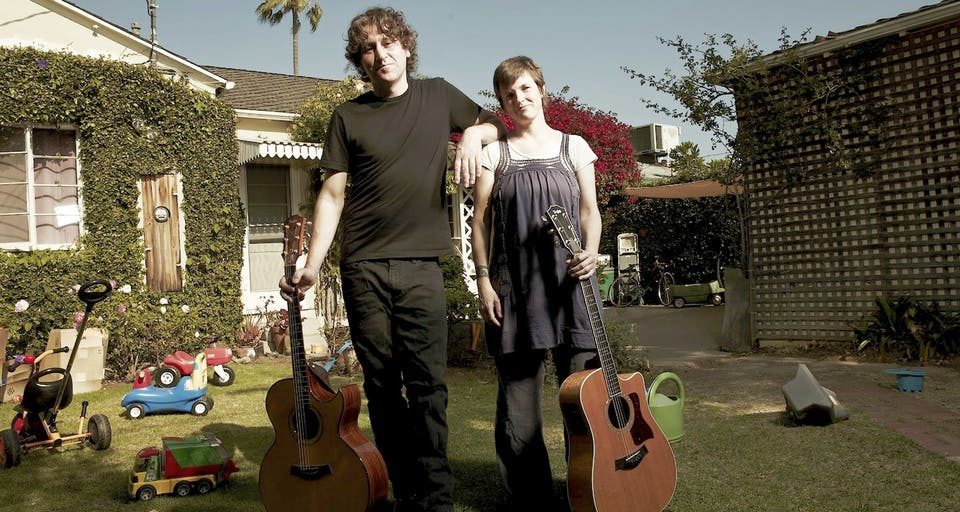 This concert was intoxicatingly cute and sweet, needless to say, I enjoyed this performance very much. The Weepies kick-started their first stop on their 10th Anniversary Tour Thursday night in a truly grand fashion at The Englert. I went into the show knowing very little about this adorable duo but after the night was over I now understand how they sold more than a million records and have such a loyal fan base.

I was surprised by the wide variety of fans in the audience, ages from 5 years-old to 75 years-old were in attendance. I don’t want to paint this band as a simple small family band because they rocked the house in a grand way that anyone could dig it.  There were some bumps and rust dusting that happened very rarely but the duo was always quick with a joke and recovered in a very charming and professional way. The energy in the audience was that of people who were all enjoying their time and were all happy to be seeing this musical group.

The stage was set with quaint shrines on the left and right corners of the stage with the themes of the sea and the sun. The background was a changing combination of their logo of a hand drawn bird or whale. They were a joy to watch and listen to. At the end of the concert, they even gave away free glow in the dark stickers and buttons!

I really enjoyed their songs Crooked Smile, Fancy Things, and Be My Thrill. I highly recommend looking into their albums Say I Am You, Hideaway, and Sirens. This band is yet another reason why I have loved this year’s Mission Creek Festival. This event has brought truly a diverse and wide style of art, music, and literature to Iowa City.

I was shocked to learn that the couple live in Iowa City with three children. It’s always exciting to see local musicians like The Weepies play at venues and still going strong. Elizabeth Moen opened for The Weepies. Moen, a local Iowa City musician, has truly a very captivating voice that paired perfectly with her beautiful and haunting lyrics. Elizabeth Moen recently released a new album, That’s All I Wanted.

The Weepies tour dates are below. They are definitely a joy to watch and I would totally see them again!