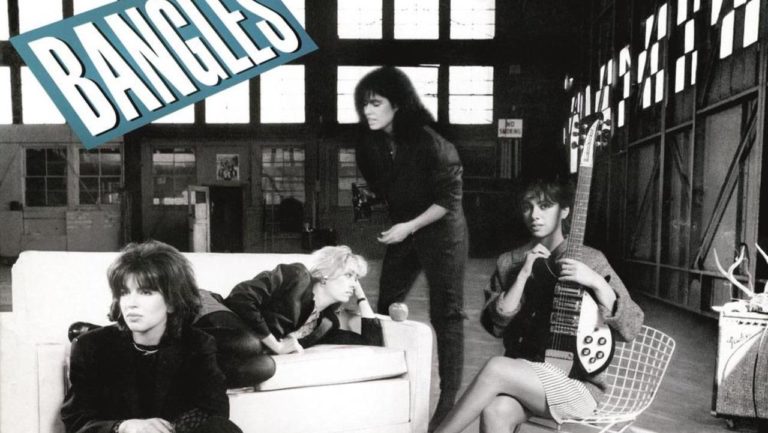 This week on Stella, I’ll be talking about popular 1980’s girl group, The Bangles, and their first studio album All Over the Place. The album was recorded with the original four-member lineup of Michael Steele, Susanna Hoffs, Debbi Peterson, and Vicki Peterson. The band formed in the early 80’s in Los Angeles and have produced a few classics from the era including “Manic Monday” and “Walk Like an Egyptian”.

The Bangles combine classic, female-driven harmonies found in girl groups from the 1930’s to the 1960’s and rock music to create a new genre of music that women hadn’t yet touched. They allowed women to be slightly less tame, even if the media didn’t market them that way. They were the epitome of girl power in pop rock.

A lot of the music I’ve heard from The Bangles has come from Gilmore Girls. (How could anyone Gilmore-obsessed forget when Lorelai gave up her and Sookie’s amazing seats to The Bangles concert so that Rory could make friends with Paris, Madeline, and Louise? Heartwarming, truly.) The band was actually a big part of the show with Lorelai speaking about her love for the group many times throughout the series.

The song we hear The Bangles perform in their Gilmore Girls performance is the first song from All Over the Place. “Hero Takes a Fall” was the first single released for the album and reached to top 100 on the Billboard charts.

The lyrics of this tune describe the downfall of a man who thinks he has it all in terms of women. “Sitting on your throne/drinking and thinking/she’ll return your call/every story’s got an ending/look out, here it comes”. The song does a great job pointing out that society gives womanizers, men whose gigantic egos can only be maintained by playing with women’s emotions, the title of a “hero”. It also points out the fragility that such a livelihood is able to hide.

As “Live” begins, I can’t help but cringe at the stark difference between the previous song’s drum-driven rhythmic ending and this twangy country-ish beginning. Almost for this reason alone, “Live” is my least favorite song on the album.

It stands out from the rest of the album because its style is so different in a way I don’t prefer. The message of living your life instead of letting it pass without a thought is something I could stand behind, however.

“James” is a song much more up to par with the theme of the album from the first few seconds. The tale is focused on James fading out of a relationship and the singer preparing to flee. The lyrics “Letting me down again, James” are often repeated, making this the short and sweet breakup song that belongs on any pop album.

Four songs in when I reach “All About You” I am beginning to appreciate the bursts of cheesy lyrics that have been popping up on All Over the Place. “You were so amused/when I made myself available” as an opening lyric made me giggle a little bit, but any lack of these borderline-funny lyrics would take the album’s charm away. It has embodied itself as a cheery teenage girl that has been wrong and is seeking revenge, someone relatable to many women.

A brief thought of forgiveness occurs in “Dover Beach”, when the singer dreams of picking up and leaving with her lover to live on the beach. I think of this as a lovely break because the same lyrical content song after song can get exhausting to listen to.

But we are back on the warpath with “Tell Me”. “Threw away the things you loved/Now you want me to forgive you/Surprise, surprise, I’m moving on” are my personal favorite lyrics along with “I can walk away so easily”. This song is such an honest confrontation to the love that betrayed her (the return of James?) that I can tell it’ll be one of my absolute favorites on the album.

“Restless” holds the same type of vengeful tone, and this is around the point whilst listening to the album the first time I was getting tired of listening. I’m hoping that there’s some point in the future of the album where the singer can move on from whoever is hurting her (James?) and can become happy within herself. I would love to hear a song from The Bangles about that kind of confidence.

“Going Down to Liverpool”, the second single released for the album, became a hit in the UK. It  doesn’t seem to be about a failing love story at all, but is instead about going down to Liverpool and literally doing nothing. I especially enjoy the music and the vocals in this one, but it could also be considered the easiest listening on the album.

And James(?) returns in “He’s Got a Secret”, “Silent Treatment”, and “More Than Meets the Eye”. He commits more misdeeds throughout these three songs including potentially cheating, not listening to his partner enough to constitute a silent treatment, and being the kind of “hero” The Bangles sing about in their first track.

At this point, I’m tired of hearing about Maybe James and want to know more about how the singer is going to get over him. Either he needs to shape up and make a 180 or The Bangles need to collectively realize that they deserve a lover they can trust and effectively get over James. (I do give kudos to “More Than Meets the Eye” because it involves a string orchestra, the one true way to my heart.)

Lastly, The Bangles included their cover of The Grass Roots’ “Where Were You When I Needed You”. I love that it’s included because it’s about getting over a past love (James)!

They have moved on in the end while still holding James accountable! While I would have appreciated a quicker turnaround, I understand that some people heal slower than others.

All Over the Place brought The Bangles attention from Prince, who gave them their hit “Manic Monday”, and Cyndi Lauper, for whom the band opened on Lauper’s Fun Tour. However, it also brought tension to the group’s free dynamic. The music industry was only releasing singles that featured Hoffs as lead singer, marketing her as the star of the group though all members of the group had equal vocal contribution.

Though this spat along with other tensions within the group, The Bangles went on to release another two albums before breaking up in 1988. The girl group reformed in 1998 to record a single for the Austin Powers soundtrack. They then released two more albums in 2003 and 2011, despite Steele leaving due to artistic differences in 2005.

The Bangles, throughout their hurdles, pushed the standard for girl groups higher. It also gave a higher credibility to girl groups. Though they were marketed as pretty faces, they empowered young women by being a successful pop rock band comprised entirely of women. Before The Bangles, girl groups were completely vocally driven. They opened a door for women in pop to create a harder sound while still remaining light.

This Stella’s Woman Who Didn’t Get a List is Nai Palm, lead singer of the band Hiatus Kaiyote. Hiatus Kaiyote is one of my favorite bands and their album “Choose Your Weapon” is absolutely incredible. While the music is a huge part of my admiration, the vocals trump the jazzy synth by a million.

Nai Palm makes the group what it is. She can sing along to the quick rhythm and time signature changes that the music gives her. Her vocal range is very versatile, and with her the band is able to create a future-soul sound that I haven’t been able to find with another band yet.

Listen to The Bangles’ All Over the Place and Hiatus Kaiyote’s Choose Your Weapon below!

We want to thank The Indexer for helping us find the right professional to take care of all the website work around here.