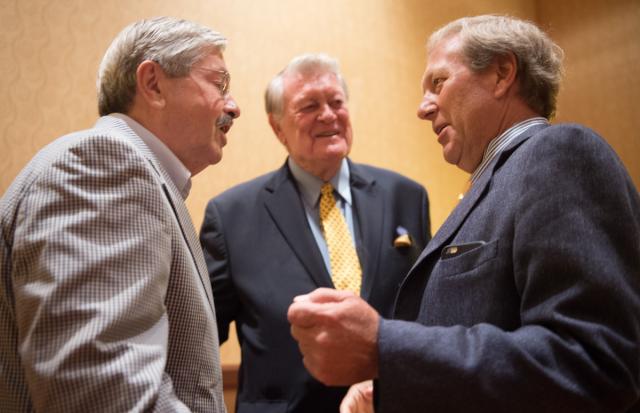 Disclaimer: The views expressed in this article belong to the writer, not necessarily KRUI

Bruce Harreld is a symbol in Iowa City– a symbol of plutocracy and ignorance. He lives comfortably atop his new throne, his rich voice reigning over thousands of people within our intellectual community, far away from its previous echo within the doors of IBM and Boston Market. Beholden to a belief system that seems to demand silence, this plutocrat is already complicit in destroying our democracy, and soon enough, our community will see funding cuts, more bureaucratic discourse trumping faculty and student rights, and a continued lack of social awareness on the behalf of administrators. We, the people of the university, will crumble underneath the University of Iowa’s house of cards.

Being in the top 1%, Bruce Harreld is a barometer for privilege and status– “give him a chance” and “he needs to resign” being the polar arguments into the plunge that is the heated controversy behind University of Iowa’s new president. In many of the articles written on Harreld, we witness facts and critical analyses, but one fact has been left out: Harreld doesn’t care about the people here, and he never did. Now he has to try, as it may cost him his $590,000 a year job (plus $1 million in deferred compensation over five years).

It isn’t about Harreld’s lack of higher-education experience or his background as a corporate businessman– no, these qualities aren’t inherently negative. What this is about is the people who look to Harreld to make positive changes– the undergraduate students– and they haven’t been fed a word of good news.

Amongst announcements of redistribution of funds, and Harreld’s “????” PowerPoint bullet in regards to the source of university funding, his internal dialogue was finally revealed. It’s clear that he wasn’t hired for his ideas, but for his blank rhetoric– “great to greater” analogous to “Make America Great Again.” He seems to be veiling ignorance, but cannot admit to it. Why doesn’t a president of a university have any solid plans for moving forward? What are his motives?

To the Regents, he may have come off like a man with a vision, and probably more, but a privileged, majority white bunch as they are, they don’t understand the needs of all people; look at their backgrounds. None of them were ever forced to confront the challenges of higher education. Remember, these are people that still force us to submit all of our input on their omnipresent behavior within an hour, onto a tiny camera in a small room. We can only sit and hope that one of the Regents listens to it later, let alone mildly acknowledges the points being made. Even Harreld, who won’t push for state funding or social issues on campus, stated in his recent town hall meeting that he doesn’t think this is acceptable.

But there haven’t been any changes. The Iowa Board of Regents continues to remain distant and inept, completely lacking community engagement and transparency, two of their “core principles.” They chose a president almost no one wanted, enabling him to speak on campus before anyone else. This is enough to show the court system their inability and dysfunction, proving them an illegal and illegitimate bureaucracy, leaning plutocracy. But who has the money and time to take them on? Democracy is being thwarted here, and until the law changes (or until a lawyer works on this) we have to do the only thing we can do: take down their iconic, undemocratic talking head, Bruce Harreld.

Regent issues aside, Harreld doesn’t make people at the university feel comfortable. Ultimately, the problem isn’t with what Harreld wants, because it doesn’t seem like he has much to offer. The problem is with what he doesn’t know, and what he continues to misunderstand. He has a lot of power, and without the knowledge or adequate care it takes to be a president of a university, he will be dangerous. He’s not only dangerous to issues of funding, but dangerous in that it could spell even further disenfranchisement of minority students [UI’s hidden past], international students, lower-class students, or anyone that falls outside the category of sports, where Harreld seems to have the most motivation. He seems blind to the idea of social justice, or increasing state revenue support to take the burden of heightened tuition off of students.

In 1981, state appropriations accounted for 77.4% of the revenue for Iowa’s public universities, while tuition only accounted for 20.8%. But in 2015, state appropriations sat at a measly 34.7%, while tuition peaked to 60.7% of the total revenue. The casual kiss of financial lines in 2009 went seemingly unnoticed– their intersected paths predetermined to grow apart again, this time in the opposite direction, resulting in a youth-draining effect: students are deep in debt. Some see this inevitable future and go out of the country for education that is nearly free. But here, our lack of state funding continues to be a detriment to the future of students’ finances. To some degree, students are willing to fight for its reversal, but this drastic flip in the source of revenue is too much for them to handle on their own.

To this, Harreld insists we need a “backup plan,” “B & C,” inferring he won’t be successful in pushing Rastetter, his appointer, to appropriate more funds for the university. Bruce Rastetter, Board of Regents President, continues to pit the universities against each other, and Gov. Terry Branstad, who appointed Rastetter, has been cutting public funding from the University of Iowa for years. To quote the book of John (or Bruce), “The Son can do nothing of himself, but what he seeth the Father do: for what things soever he doeth, these also doeth the Son likewise” (5:19).

In addition to this lineage of power, Regent Mary Andringa, one of the Regents that appointed Harreld, recently resigned from the Iowa Board of Regents after she failed to submit proof that she was a director of Herman Miller, a furniture manufacturer. This manufacturer recently won a multi-million dollar contract with the University of Iowa. What other corrupt regent activities are we unaware of? Why did the Regents pick Harreld?

While the other candidates for UI presidency climbed to the title of Provost, Harreld worked for Boston Market and IBM. Now, for some reason, he’s started at the top of the higher-ed food chain, with no fundamental platform other than trying to raise funds in a yet-to-be-decided way (remember, he needs ideas from you about this). We were lucky to get one public forum this year.

And there’s the rub. Harreld is lost; he’s completely out of his sector, and he fundamentally doesn’t connect with people on campus because he doesn’t understand the issues or adversity they encounter on a daily basis. His previous experience is capital and profit– now he’s living in a value and ethics world. And rather than someone like Joseph Steinmetz, or Michael Bernstein, Harreld has low favorability because, frankly, he doesn’t know what to do with a community that isn’t a business one. That’s why he has made his job ours, and we, studying, working, and largely unorganized, cannot actualize our ideas in Harreld’s “come visit me” input system, let alone “make real the promises of democracy” like Martin Luther King Jr. believed we ought to do.

Harreld has long ignored this; his “come and get involved” town hall rhetoric only shows his naiveté. When you’re electing a president, a fundamental leader in society, you would think that person would be highly motivated and excited to implement their idea of what a just and ethical institution looks like. But Harreld does not independently bring up issues that concern him, and even when the community brings forth issues, he doesn’t take action outside of his discussion with an advocacy group. Brief introductory meetings don’t change systemic problems; his vision is neglectful.

Why doesn’t he cut Iowa’s (well above-average) administrator pay to help offset other costs? Why didn’t he advocate for any specific issues past raising faculty salaries (a clear appeasement tactic)? Why won’t he raise the minimum wage on campus? Many universities suffer from the same systemic problems, so it’s not like the University of Iowa is absolutely unique in its faults. How has he show his awareness or care? He hasn’t, and instead, he’s resorted to supporting us through the carefully construed Iowa Now narrative. But it’s shallow and soulless. We get it Bruce, you like us, we’re great. But have you ever understood our community’s issues?

Harreld should be angry and frustrated like we are. He should have worn it on his face. But this is what plutocrats do: front our ignored issues in façade, while they bask in the comfort of their throne. All we observe from Harreld is confusion and obfuscation– the breadcrumbs of a socially ignorant, wealthy, privileged man­­– far from his core comfort zone of exploited labor and eight-digit profits.

5 responses to “Bruce Harreld: The Plutocrat That Cannot Relate”