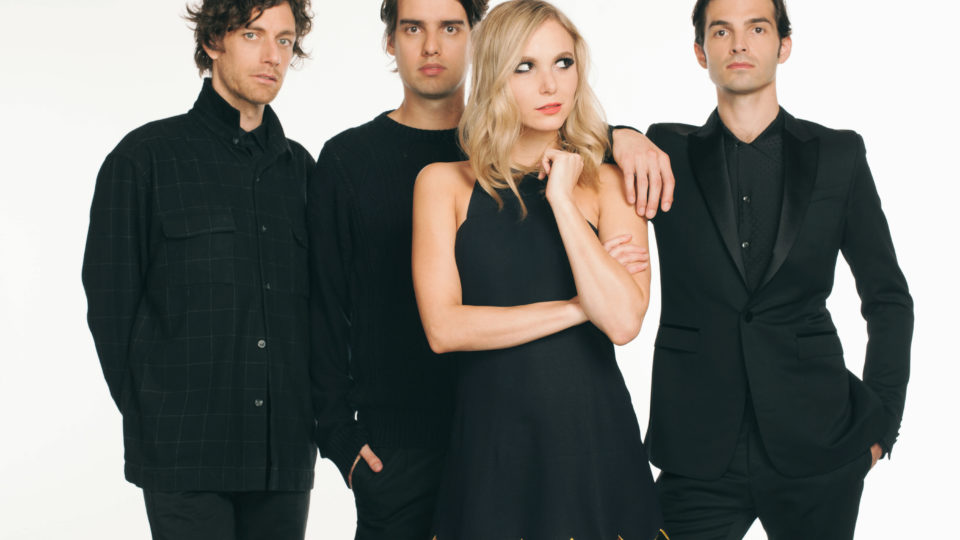 The longtime friends experienced emotional turbulence after a disappointing reaction to their album. Berg threatened a solo career, and PHASES nearly dissipated into oblivion.

Anxious to hold its vision together, PHASES experimented with its sound.

After a while, the band hit upon a decisive sound. Reenergized and hopeful, PHASES tried again. (If you want to learn the whole narrative from the band itself, visit the band’s website or Facebook page!)

For Life exudes energy and personality. Synthetic, poppy, with a hint of rock, the songs fit any mood. While I listened to the album, I felt as if the world became a little sharper and focused. The musical talents of the artists complement each other and create a fabric of musical experience.

Silhouette sneaks up on listeners. The song begins generically synthetic. Rhythmic beats pop in the background as Z Berg softly croons. Though the sound pleasantly resonates in the ears, it isn’t anything special. Yet, twenty seconds in, the song suddenly intensifies and grips the listener. Incorporating more electronic sounds as Z Berg’s vocals intensify, it creates a suspenseful tension. A good start to the album, the tension from the song encourages listeners to continue along the ride.

Betty Blue is a fun, Summer-sounding anthem. Like “Silhouette,” the song starts deceivingly dully, but shakes itself into a relaxed positivity. As Berg sings temptingly, “Let’s get a little loose.” I could almost taste a strawberry smoothie melting in my mouth and feel sunlight dancing upon my skin while her voice slipped into my ears.

If you know any of PHASES’ songs, it is most likely I’m in Love With My Life. The song plays in the trailer for Sims 4 Perfect Patio. Perhaps a hokey place to feature, but the song shines regardless. Fans hear the love of life in the upbeat waves of synth and vocals. I’m in Love with My Life highlights the males’ vocals in addition to Berg’s, which incorporates a cool layer of sound. PHASES released a music video for the song, and I encourage fans to watch it. Not only does the band produce pretty music, they also possess pretty faces.

Spark ironically felt a little cooler. Berg laments a lost love, and her pure voice echoes. Her voice drives Spark, and I love it. Male voices pillow hers in the background, adding without distracting. Though the electronic elements remain upbeat like the other songs, it does not offset the emotion of the song. She sings, “What could have been will haunt you,” and listeners indeed feel haunted by her beautiful voice. I do not often associate strong vocals with electronic music, but I happily admit my wrong with PHASES.

Cooler revived the Summer feel present in the beginning of the album. It starts noticeably faster, and after a minute in, the chorus aggressively shoulders its way into the song. “I really thought you were cooler/ I guess I thought you were cooler/ Damn,” Berg sings, and listeners receive the image of a shrug. Cooler emanates a breezy, yet carefree, vibe. PHASES reminds listeners that many people disappoint, but that it is best to let the disappointment roll off your back.

Vertigo begins darkly emotional. However, as with many of the other songs, the beat picks up soon after the beginning. The chorus features upbeat synthetic vibes and electronic elements. Though Vertigo does not shine as brightly as the rest of the album, the chorus of the song kicks ass. When the chorus kicked in, the vibe changes from somberly resigned to compellingly vengeful.

Part of Me radiates youth. PHASES transfers emphasis from vocals and features catchy beats. The band incorporates some clapping sounds occasionally, which struck me as slightly self-serving, but not obnoxiously so. Part of Me sounds almost like a song found within a video game, and produces images of pixels dancing about on brightly lit screens. I enjoyed the song, but not as much as some of the other songs on the album. However, I was never much into video games. Perhaps avid gamers would disagree with me on this song.

Running Away also did not stand out to me as much as the other songs. Though Berg kept my interest, the electronics sounded slightly kitschy to me. I still encourage a listen because the song has cool facets in it. The song did not feel as peppy and happy as the rest, which might explain my aversion.

I loved New Illusion. In this song, Berg’s voice feels lighter. The popping of the synthetic tones in the back of the song contributed the sparkling tunes. When I first listened to the song, I was walking back from the gym after leg day. Fatigue mingled with my endorphins as they swam through me, and this song perfectly fit the mood. The world felt new and dreamlike.

I Don’t Know What’s Right starts breathy and dissonant. Laughter echoes far off in the music, and listeners get the impression of sitting within a crowded room. The breaths swirl throughout the song and offset the beat. Berg sings, “I’m in love with a memory,” which fits the mood of the song perfectly. One of the awesome things about For Life is the way the lyrics sync with the music. The sounds excellently match the emotions conveyed through the words.

Take Me There concludes the album. The most notable aspect of this song lies in the base. While listening, I felt compelled to drive with the windows down and subwoofers turned way up. Take Me There vibrates with electricity, and evokes the image of swimming in electronics in the listener’s mind. “Ahs” continue throughout the song, and this vocal element with deeper synthetic tones sounds like a prolonged goodbye. PHASES chose a proper concluding song to their album.

If you have not yet heard PHASES or For Life, definitely check them out!

Highlight Tracks: Silhouette, I’m in Love with My Life, Spark