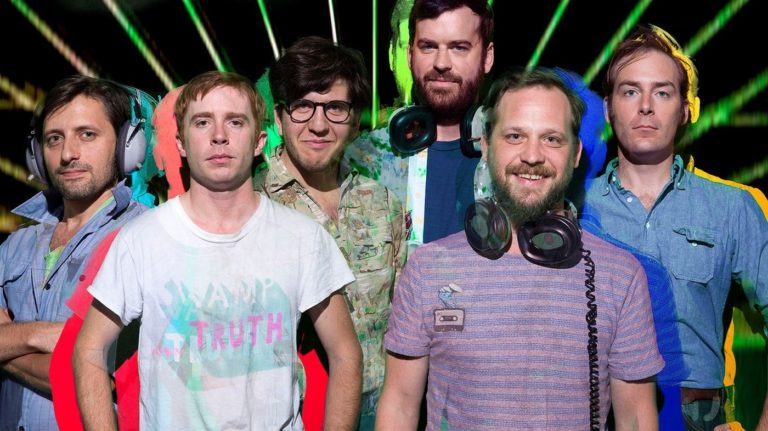 Dr. Dog‘s most recent work of art, “The Psychedelic Swamp” gets me pumped for the upcoming summer days. This album is a more polished, revamped version of their unreleased debut LP back in early 2000’s, and it’s a good time.

“Bring My Baby Back” sounds like a mix of Wilco and Portugal. The Man, and I sort of love it. The slower pattern played on the drums coupled with the lax vocals create a lazy, relaxed tune that I can imagine blasting out of my obsolete boom box strapped to the back of my bike as I ride through the suburbs.

(“Does she think she can make the weather become warmer if she describes summer in enough detail?” Yes. Yes I do.)

Their next song, “Golden Hind” has some pretty complicated lyrics like “time releases time” and “circles go around other circles,” but the vocalist repeats the line “I really care about you.” Despite the sentiment, the title still makes me think this song is about a person with a great ass. This song reminds me of summer too, because of the opening lines “lovely morning rays.”

Although I don’t really like “Dead Record Player,” I enjoy the seemingly contradicting nature of the song. The vocalist sings about how all of his records only play songs about death, and seem to want him dead, like how “the Beatles … keep singing about graveyards,” but the sonic qualities of the song sound really upbeat and uplifting.

The following song has my favorite title on the entire album. “Swampadelic Pop” describes a “psychedelic swamp” which honestly sounds like a great place to be. “In the psychedelic swamp, it’s a dream.” I don’t know exactly what that means, but I’m open to new things.

I have no idea what the lyrics in “Fire on My Back” mean, but it’s a fun song that reminds me of Weezer before they got old.

The next song begins with some creepy extra-terrestrial noises and crazy effects. “Holes in My Back” has only two lyrics: “Holes are in my back/Souls are coming back now.” The song sounds like a power ballad without the build to an epic chorus… the entire song is just a repeated epic chorus.

The slide guitar and references to previous songs in “Engineer Says” make this song so great. The vocalist references “the swamp,” the discussion of death resembles “Dead Record Player” and he also explicitly says “bring my baby back to me.” Being the seventh song out of thirteen tracks on the album, this seems like a nice halfway point to remind us of the great music we’ve heard so far.

The name “Swamp Descent” sounds like a track heard on a movie soundtrack, and this is an instrumental! The choruses sound heavenly, but listeners can hear a bunch of weird noises in the background, so we still have no idea what this “psychedelic swamp” is like.

“In Love” sounds like a song you might hear in a romantic comedy during the part where the two lovers have an argument and spend some time apart, realizing how much they care about each other. A little sad, a little hopeful, a lot of realizations like “I was looking for a girl/But you’re all I see.”

“Good Grief” seems like Dr. Dog’s way of saying “you do you,” but low-key judging people for doing what they want. “You can… Start living in the belly of a whale/
But good grief.” The vocalist kind of says “do what you want… I suppose.”

“Badvertise” sounds like a post-rock “rage against the media” song, and that’s cool, but the song was so repetitive and I didn’t enjoy it.

“(swamp inflammation)” follows the trend that many other psychedelic rock bands have started by using some weird distorted voice to say some random words for a short “song” that has no explanation and doesn’t seem to add anything to the album. I say AWAY WITH THIS TREND.

The last song on the album pleasantly ends the experience by lazily repeating the name of the album that listeners cannot forget after Dr. Dog has belabored it in so many songs.