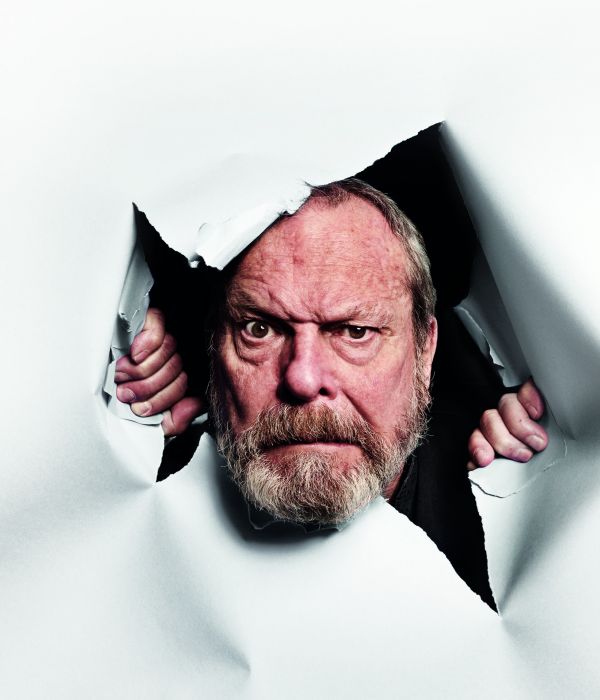 On October 23, the IMU hosted a free lecture from famed director, screenwriter, animator, and actor Terry Gilliam. In celebration of this wonderful event, I figured it’d be helpful to take a brief look back on the life and career of the talented Terry Gilliam.

Gilliam was born on November 22, 1940, in Medicine Lake, Minnesota, a mere five hour drive from Iowa City. In his early teenage years, his family moved to the Los Angeles area. It was there that Gilliam experienced the tumultuous 60’s. He eventually graduated from Occidental College with a degree in Political Science, but the scenes of police brutality and rioting in 1960s LA left a bad taste in Gilliam’s mouth, and in 1967 he moved to England.

Gilliam began work as an animator for children’s programs in England. Through John Cleese, whom he had met while working on Help! magazine back in the States, he began work on the influential TV series Monty Python’s Flying Circus. He created animated shorts for the sketch comedy show, and was given complete creative control, something he would have to fight for later in his career. Originally listed separately from the rest of the Pythons, he began being listed as a starring member on the show, and played small parts in some of the live-action sketches.

When the troupe made the jump to the big screen with 1975’s Monty Python and the Holy Grail, Gilliam worked as a writer, actor, and co-director. He also co-wrote and acted in the other two film releases from the group, Monty Python’s Life of Brain (1979) and Monty Python’s Meaning of Life (1983).

With the inevitable end of Monty Python, Gilliam began his work as a solo director in the 80’s. His first three films, the self-proclaimed “Trilogy of Imagination”, developed and displayed his unique style. Time Bandits (1981), Brazil (1985), and The Adventures of Baron Munchausen (1988), all featured Gilliam’s trademarks as a filmmaker. Full of dutch tilts, angled shots, and extremely wide angled lenses, these films all dealt with themes of fantasy, imagination, and escapism through the eyes of characters both young and old.

In the 90’s, Gilliam began his “Trilogy of Americana.” The Fisher King (1991), 12 Monkeys (1995), and Fear and Loathing in Las Vegas (1998) all dealt with and were set in America. While still unmistakably Gilliam’s work, these films were slightly less fantastical than his “Trilogy of Imagination.”

Fear and Loathing in Las Vegas, an adaptation of controversial gonzo journalist Hunter S. Thompson’s novel of the same name, would become Gilliam’s most famous film. With its surreal and twisted style, and its star-studded cast, the film heavily divided critics upon its initial release. Despite this, the film became a cult classic, and retains a loyal fanbase to this day.

The new millennium marked a change of direction for Gilliam’s career. He was originally chosen by J.K. Rowling to direct the film adaptation of her popular Harry Potter series, but was replaced with the “safer” director Chris Columbus by Warner Bros. Studios. In 2005 he released Brother’s Grimm, and followed it up with Tideland in the same year. During production of The Imaginarium of Doctor Parnassus, the death of lead actor Heath Ledger, who also starred in Brother’s Grimm, put a halt to the film. Despite the tragedy, and even after being hit by a bus and breaking his back during production, Gilliam managed to save the film, and it was released in 2009. In 2013, Gilliam released his latest work, the British sci-fi The Zero Theorem.

Check out a trailer for Gilliam’s new book, Gilliamesque, A Pre-posthumous Memior below.