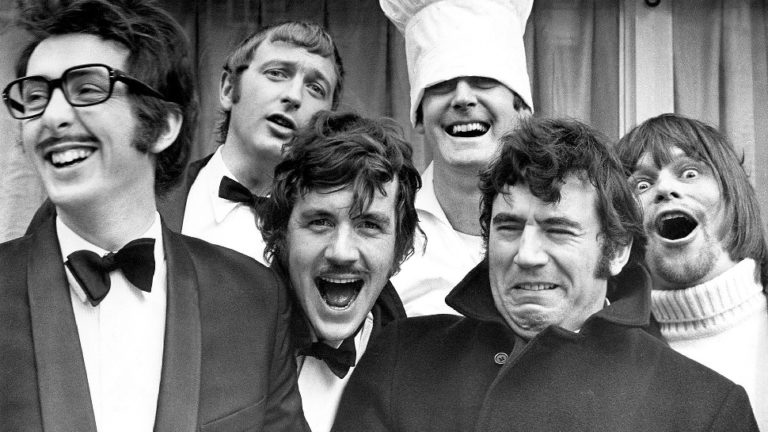 When it comes to comedy icons there is no one higher than Monty Python. This gang of 6 goof balls are responsible for some of the biggest footprints in comedy.

As a child growing up Monty Python’s Flying Circus was worshiped by my siblings and myself. I distinctly remember staying up until midnight as an 8-year-old watching the DVD box sets with my brother.

This comedy group has caused my humor to be part wacky, silliness, and sick dark comedy. The members of this troupe are Graham Chapman, Michael Palin, John Cheese, Terry Gilliam, Eric Idle, and Terry Jones.

This team consisted of all men from the United Kingdom except for Terry Gilliam, who was from Minnesota.

This group might not be as known to people my age or younger but their influence can be seen from everything from music, movies, literature, or television, to art.

Their sketch based show was full of wacky nonsense and it was beautiful. They became so popular that they decided to start making movies. Their first movie was Monty Python and The Holy Grail (1975).

This story is about King Arthur and the knights of the round table in search of the holy artifact.

The knights come across a bloodbath wedding, a stubborn torso Black Knight, an Enchanter named Tim, and a man-eating bunny.Instead of riding horses each night as a squire, he instead clacks two coconuts together to make the sound of hoofs clacking in lieu of real horses.

If what you just read for the past two sentences doesn’t have you smirking, then you may just be dead.

The interesting thing about their first two movies was how low budget they were.

The reason for coconuts instead of horses was due to the fact that real horses were too expensive.

Also for their second movie, Life of Brian(1979), they couldn’t find any studios to give them the budget to make the film so Beatle George Harrison fronted the money. He is even listed as one of the producers of the film.

This comedy truly means a lot to me and I hope others will check them out. Also, their full collection of episodes and movies will be on Netflix soon!

Here are some links to my favorites clips of their work.

Self Defense Against Fresh Fruit