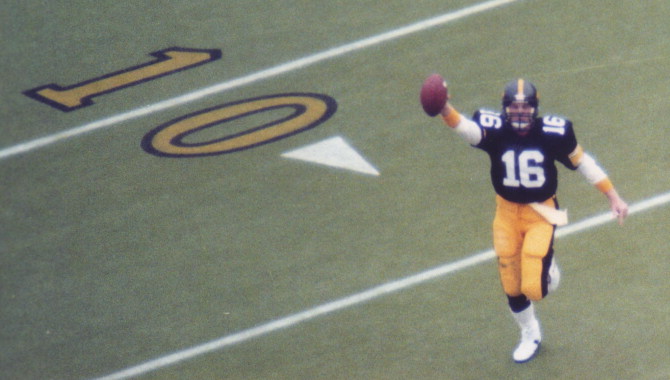 Last Saturday on the Big Ten Network, the series Big Ten Elite, which chronicles some of the best teams to ever play in the history of the conference profiled the 1985 Iowa Hawkeyes football team. The 1985 Hawkeyes are a team that remains the standard of achievement in the history of Iowa football and the effects of what that team accomplished can still be seen walking the grounds of historic Kinnick Stadium every fall Saturday.

The Hawkeyes were led that season by legendary head coach Hayden Fry who would lead the Iowa football program to unprecedented success over his 20 seasons in Iowa City. However, when Fry took over the Hawkeyes before the 1979 season, the Iowa program was anything but successful. It had been 17 years since the Hawkeyes had posted a winning record; the longest such drought in the nation and Fry was determined to change the culture to a winning one.

The Hawkeyes entered the 1985 season on a high note after blowing out the Texas Longhorns 55-17 in the Freedom Bowl following a disappointing 1984 season in which the Hawkeyes finished 8-4-1. The Hawkeyes knew they were going to have something special after QB Chuck Long announced that he would return for his senior season. Following the announcement, Long immediately became a Heisman Trophy candidate, and the Hawkeyes were a pre-season top five team.

Three weeks into the season following blowout wins over Drake, Northern Illinois, and rival Iowa State, the Hawkeyes were ranked #1 in the country for just the second time in school history. The Hawkeyes opened up conference play against the Michigan State Spartans who had beaten Iowa by one point in controversial fashion a season earlier.   After some early troubles stopping the Spartans offense, Iowa was able to earn a narrow 35-31 victory, capped off by a memorable touchdown run by Chuck Long in the final minutes to seal the win.

This win would setup a showdown between the #1 Hawkeyes and #2 Michigan Wolverines two weeks later at Kinnick Stadium. The Wolverines led by long-time coach Bo Schembechler came to Iowa City boasting the nation’s top ranked defense, which had only allowed two touchdowns all season. The Hawkeyes trailed Michigan 10-9 late in the fourth quarter before taking possession at their own 22-yard line with just 5:30 remaining in the game. The drive that ensued is one that still burns vividly in the memory of Hawkeye football fans as Long drove Iowa to the Michigan 12-yard line, mostly on the effort of standout running back Ronnie Harmon. With two seconds remaining Iowa kicker Rob Houghtlin, a walk on who was cut earlier that season and only given a second chance after winning an intramural kicking competition, booted the game-winning 29-yard field goal as time expired to give Iowa a thrilling 12-10 victory.

Unfortunately, the Hawkeyes season hit a bump in the road two weeks later in Columbus as Iowa fell to the #8 Ohio State Buckeyes in tough fought game 22-13. The Hawkeyes however would bounce back to end the season with three straight victories. The Hawkeyes finished the season ranked #4 in the nation and would face #13 UCLA in the Rose Bowl, the second of three that Iowa would play in under coach Hayden Fry. Although Iowa would end up losing the 1986 Rose Bowl 45-28 to the Bruins, it could not ruin the luster of the Hawkeyes historic season. Iowa finished the 1985 season with a 10-2 record and had won the Big Ten title outright for the first time in 27 years. Chuck Long won many awards following his standout senior season including the Maxwell award, given to the nation’s top player and the Davey O’Brien award, given to the nation’s top quarterback. He was named Big Ten Player of the Year, a consensus first-team All-American, and finished runner-up for the Heisman Trophy by one the closest margin’s ever, narrowly losing out to Auburn standout Bo Jackson.

The players that led the Hawkeyes in 1985 are names that still live in Hawkeye lure, including tackle Mike Haight, defensive backs Devon Mitchell and Jay Norvell, and linebacker Larry Station. The other result from Iowa’s historic season was that Hayden Fry’s assistant coaches that served on the 1985 staff would all go on to become very successful college head coaches later in their careers. This includes current Kansas State head coach Bill Snyder, current Oklahoma head coach Bob Stoops, former Wisconsin head coach Barry Alvarez, and current Iowa head coach Kirk Ferentz. Another positive to come out of the 1985 season was the awareness that Fry and the Hawkeye’s raised about the Farm Crisis crippling the nation’s and especially Iowa’s farming populations during the mid 1980’s. Numerous farmers working on land that had been passed down to them for generations were being forced to sell because of financial trouble. Fry was able to spread awareness through his winning team on the national stage by putting the decal of ANF or America Needs Farmers on the side of Iowa’s helmets. The decal has ever since been worn by the Hawkeyes on their helmets to relay to importance of an issue that still rings true today.

The 1985 Iowa team will always hold a special place in the hearts of Hawkeye fans  and created a standard of winning for Iowa football and showed that a program like Iowa could in fact compete for Big Ten championships. The impact that this team had both on the football field and the state of Iowa still carries tremendous weight today and that is what makes the 1985 Iowa Hawkeyes truly an elite team.