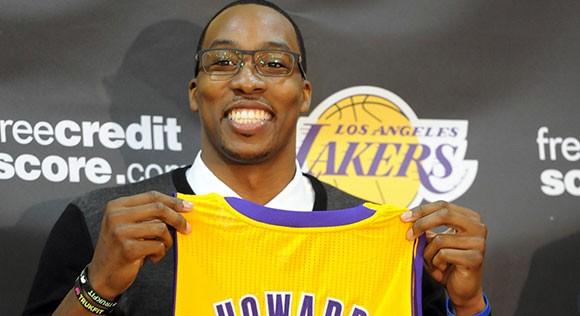 Looking back on the four-team Dwight Howard deal that rocked the preseason, it was easy to view the Magic as the losers and the Lakers as a lock for the NBA Finals. The Magic traded away their all-star center and became the only team to not receive an all-star in the deal. Orlando instead went for a quantity over quality approach to the trade, swapping one dominant center for six so-so players and draft picks. Meanwhile the 76ers acquired Andrew Bynum and Jason Richardson, the Nuggets picked up Andre Iguodala, and the Lakers received Chris Duhon, Earl Clark, and some guy named Dwight Howard.

This was a gigantic trade that created an all-star team in Los Angeles, gave Philadelphia the big man they’ve been dreaming of, and the Nuggets finally got their leader. However, a lot has happened since August of 2012 and the outcome of this trade that sent eleven players packing can be viewed much differently.

As the season has progressed and teams have shown what they can do, it’s obvious that Orlando is far from the losers of this trade. Nikola Vucevic, who came from the 76ers, is in the middle of a breakout season, being named to the NBA Rising Stars team along with averaging a double-double with 12 points and 11 rebounds. He’s become an excellent piece in the Magic’s rebuilding along with Arron Afflalo, who’s upped his stats as well. Orlando’s record is down from last season, which was expected after losing the main piece of their team, but things look bright for their future with hard working young talent and multiple future draft picks.

Now for a pop quiz. Name a team that has an improved record after August’s trade. The answer is the Denver Nuggets, who have easily gained the most from this trade. Denver’s pickup of Iguodala was obviously good, but there were also questions of how much he could actually bring to the Nuggets due to his injuries and drop in scoring. Well Iggy must love wearing yellow because his scoring is on the rise and he’s already played as many games as he played last season. His numbers haven’t been anything to write home about but his leadership has certainly helped launch the Nuggets high into the playoff picture.

Denver has been doing nothing but fielding strong hardworking teams since the Carmelo Anthony trade and this year’s team is a prime example. The Nuggets stand on top of this four team trade because they are the only one primed to keep playing games in June.

The definite losers in this four team trade are Iguodala’s old team. The 76ers have plummeted from a playoff team to scraping the bottom of the East. You can’t expect much different when you trade away players and get nothing in return. Well, they did receive Andrew Bynum out of the deal but he’s been nothing more than a model for the worst haircuts Philadelphia has to offer. He has yet to play a single game for the 76ers and Coach Doug Collins has aired his frustrations about the whole situation, even saying that he was not impressed by the few practices Bynum has participated in.

His contract is more or less a hole in the pocket of the 76ers franchise and it would not be unlikely that they don’t pick up his contract. The people of Philadelphia and the team have been nothing but frustrated by this trade and greatly miss their beloved small forward. Andrew Bynum has said over and over again that he wants to play in the NBA but he won’t play through pain, so until further notice, he’ll just take up cap space for the 76ers.

And what about the team full of all-stars? As anyone that pays any attention to sports can tell you, the Lakers haven’t had the season they’ve hoped for. They broke up Bynum and Gasol to bring in Dwight Howard, presumably a great move, but turns out Dwight Howard doesn’t play well with others. It’s obvious that he misses being the center of attention and has had many highly publicized disputes with Kobe about how he should play. The Lakers did pickup Earl Clark in this deal and he has turned out to be a great player for them, but Dwight has been nothing but disappointing. His free throw percentage just seems to get worse and his scoring has dropped drastically.

It also looks like D12 may start looking at other teams in the offseason meaning the Lakers could lose the piece that sent their team into shambles before they can even fix it. Along with the hiring of Mike D’antoni and various injuries throughout the team, the Lakers are creating drama that could rival the New York Jets. Los Angeles is dangerously close to having the Clippers in the playoffs and the Lakers not; something I honestly never thought I would say.

If Kobe isn’t able to will his team back into contention, we could see the Clippers being the sole representation of LA in the playoffs and then I assume a black hole will open up and swallow the NBA whole.