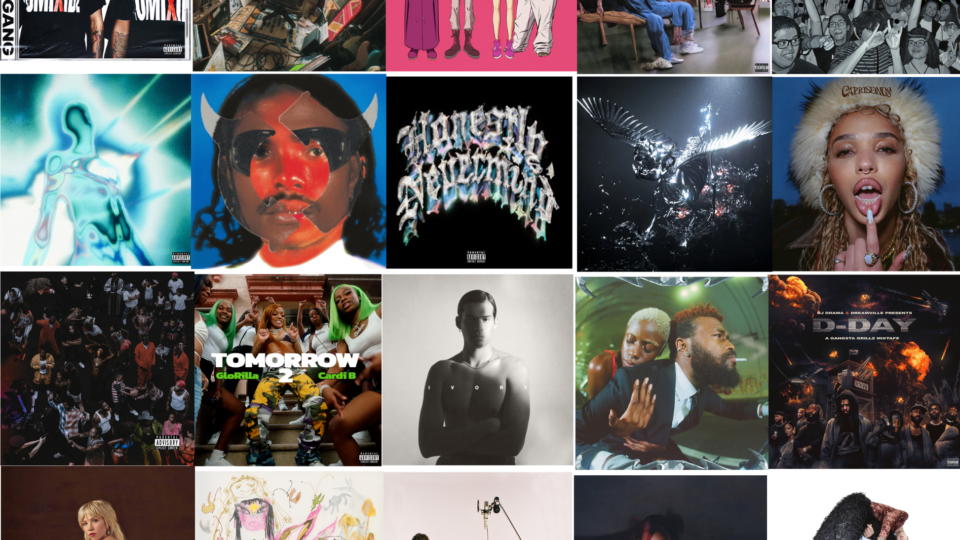 A perfect summer jam for the windows rolled down and a sunset drive along the coastline.

Flo Milli continues to bring amazing energy and personality to hip-hop, and her latest smash hit proves that she’s here to stay.

Released as something of a joke, Lil Yachty’s comeback single is fun, catchy, and endlessly replayable.

A beautiful fusion of middle eastern sounds with catchy pop melodies and a Vince Staples verse to top things off.

Chaotic, unchained, and as exciting as one would expect from a duo signed to Playboi Carti’s “Opium” label.

A very finely crafted instrumental from DJ Premier scores some of Logic’s best rapping to date.

A short, explosive, and incredibly fun song that sees both artists in top form.

Freddie Gibbs over a beat that could have very well been used by Three 6 Mafia is something I never knew I needed.

A high-octane posse cut with Cochise at the forefront is just as entertaining as it sounds.

Fivio slides perfectly on a beat spearheaded by a pitched-up vocal sample, just a solid rap song all around.

Leikeli47 sounds cool, calm and collected over a very subdued and head-bobbing instrumental.

Gorillaz return at their very grooviest and funkiest with an amazing helping hand from Thundercat.

The lead single from Pharrell’s upcoming solo album sets expectations high with killer appearances from 21 Savage and Tyler, the Creator.

Describing Monaleo’s viral hit freestyle is hard with words alone. The Houston native delivers a seemingly endless stream of absolutely hilarious bars over the instrumental from Chief Keef’s “Faneto,” and the accompanying video is just as great.

A trippy, urgent, and amazing collaboration from two of the best innovators in alternative music today.

Uzi sounds right at home over such an ethereal and fantastic instrumental.

Superorganism’s boundless creativity is ever-present on such a fun and exciting pop tune.

A dancehall song from FKA Twigs & Shygirl is perhaps one of the greatest ideas realized this year.

A twisting and turning R&B jam with beautiful production and even more beautiful vocals.

“NOSEDIVE” is one of those songs that makes you feel like you could punch a hole through a brick wall.

Drake & 21 Savage’s creative chemistry was only further emphasized with such a catchy and well-produced song.

“Hot Shit” sees Cardi B operating at her finest, and she manages to outdo both of her featured artists on a visceral Tay Keith beat.

“LOCK IT UP” stars one of the most triumphant and exciting instrumentals of the year, and each guest verse feels like a perfect addition to a perfect beat.

The second collaboration from Drake & 21 Savage on this list opens with a fantastic false start from Drake that unleashes the amazing beat switch to set the song in motion. The end result sees both artists excelling and doing what they do best.

Glorilla’s fiery energy was matched perfectly by Cardi B on such a great remix, and Cardi’s verse was one of the best features of the entire year.

Björk’s emotional tribute to her late mother with her son was one of the most emotionally poignant moments in music of the year, and the song is still just as touching and magical.

Mura Masa has been producing at such a high level for years, and a stellar dance song with Shygirl & Channel Tres feels like yet another slam dunk.

A somber, guitar-led ballad coated in Ravyn Lenae’s signature feathery vocals is a recipe for success, and she nails it as per usual.

Bree Runway’s ability to push pop-rap decades into the future is as clear as ever with “THAT GIRL,” an industrial and synth-led banger that marks a new era for one of pop’s most exciting new stars.

While Jack Harlow’s “Come Home The Kids Miss You” was largely a disappointment, his collaboration with Drake brings fantastic verses from both artists to a great instrumental.

The guitars on “ANGEL” feel like they were pulled from some of Stevie Wonder’s early works, and Brent Faiyaz does justice to such a beautiful sonic palate. He shines brighter vocally than he ever has before, and the song is one of the greatest he has ever released.

“Helmet” is so simple, short, and fun that it can be replayed for hours without feeling dull or annoying. Steve Lacy’s bright vocals and gorgeous guitar leads forge a track perfectly suited for a bike ride with the sun shining and the wind blowing in your face.

Tyler, The Creator has continued to improve in recent years, and another collaboration with Pharrell has proven no different.

“Firefly” is perhaps the best song that Shygirl has ever released, and the magic of the incredibly layered production really does replicate the feeling of catching a firefly.

The combination of The Weeknd and Swedish House Mafia is a recipe for success, and “Sacrifice” is a slick, grooy, head-bobbing pop masterpiece.

“BIZCOCHITO” feels like an auditory sugar rush (fitting for a song whose name translates into cupcake), with a choppy and high-pitched instrumental that melds perfectly with pitched-up vocals from ROSALÍA.

“Stick” feels like a modern day war anthem, with blaring horns and a screamed chorus from Kenny Mason that will energize absolutely anybody.

“Raydar” sees an already developing young talent reach his peak. JID raps like his life depends on it, and its lyrical content alone could warrant an entire dissection.

Duckwrth has already been at the forefront of music innovation, and “11:30” finds him continuing to make the most exciting dance music in recent years.

A spanglish pop tune with a beat from The Neptunes is another thing I never knew I needed, but now i can’t live without it.

The opener to “Melt My Eyez See Your Future” is contemplative, thoughtful, and enchanting in a way that none of Curry’s previous works ever have been. Beautiful instrumentation from Robert Glasper only adds to such a masterfully made song.

“The Loneliest Time” feels like one of the most cinematic songs I’ve ever heard, and Carly Rae Jepsen shines brighter than ever before both vocally and artistically on such a masterpiece.

“Neck & Wrist” is really a victory lap from two of the greatest rappers of all time, and putting the greatest producer of all time on the boards only adds fuel to the fire.

Choosing the best song from “RENAISSANCE” is nearly impossible, but “BREAK MY SOUL” feels like the best pick from the project. Beyoncé is confident, loud, and stunning vocally, and the incredible instrumental brings energy galore.

It’s hard to imagine any other track as my song of the year. Kendrick Lamar tore one of Pharrell’s most menacing beats to pieces, and the entire song is simply amazing. Its lyrical content bounces from self-analysis to trauma and struggle, and throughout it all Kendrick feels fired up in a way rarely seen. It’s a lyrical and sonic masterpiece, and is absolutely worthy of being called song of the year.