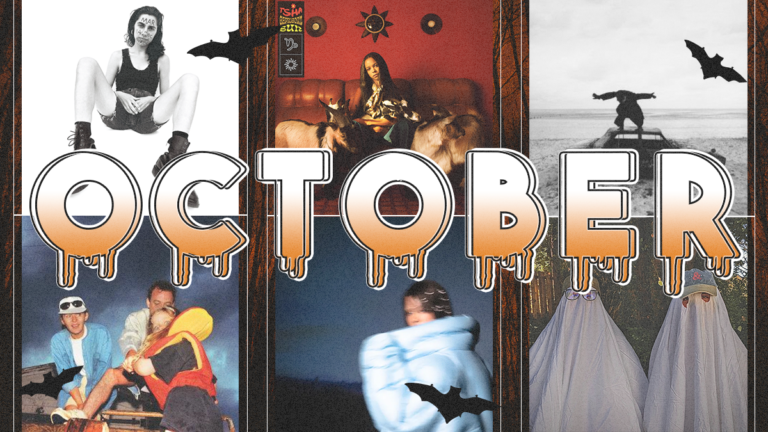 “Paraglow” is the appropriately named collaboration from modern shoegaze artists Parannoul and Asian Glow, and it glows hard. Following their last collaborative album “Downfall of the Neon Youth,” both artists have continued to innovate the 5th wave emo genre individually. Experiencing another collaboration project from them like “Paraglow” is really special. Featuring layers of moody riffs and dreamy vocals, each track has a strong sense of flow, while explosive percussion keeps listeners engaged. Everything about this record feels new. The shoegaze genre can feel stale from the constant My Bloody Valentine fervor, but “Paraglow” is a fresh addition that combines elements of jazz, metal, and hardcore into melancholic and energetic melodies. The album closes with “Wheel,” a 15-minute spiritual experience and tempo rollercoaster. It’s arguably among both acts’ greatest songs to date. – Elizabeth Pauly

I’ve listened to TSHA since 2018, when she released a track called “Sacred,” which is filled with delicate melodic elements. Since then, TSHA’s production ran on a finite line. Her songs filled a certain spots during the night, in a moment where heart and body meet. Fast forward to early this year, TSHA delivered a strong, robust, and dance floor-oriented mix for the highly regarded nightclub, London fabric. Reeled in, preparing for the release, I was a little confused on what to expect from this upcoming debut album. DJ-ready danceable tracks for a fall Saturday night? Or delicate melodies to be listened to during a cross country drive during the sunset?

“Capricorn Sun” fills both brackets, with some tracks from previous EPs and brand-new ones that allow the fresh take on TSHA’s melodic yet danceable sound. The two introductory tracks, “Galdem (Intro)” and “The Light,” set the emotional roots for the project. Even the previously released tracks like “OnlyL” still feel like they’re in the right place. Take “Power” as an example, which allows a look back at TSHA’s roots in house music. The project also includes great vocal performances from NIMMO, Mafro, and Grammy-winning vocalist Omou Sangaré. Personally, Clementine Douglas takes it all for me, especially on “Dancing in the Shadows.” On “Capricorn Sun,” TSHA displays her ability create a coherent story. The album is inherently hers from front to back, an impressive feat that is worth the listen. – Andres V. Mora Mata

After releasing two grandiose and heavily conceptual albums (“A Brief Inquiry Into Online Relationships” in 2018 and “Notes on a Conditional Form” in 2020), The 1975 decided to deviate from the poppy and synth-heavy sound on their 5th studio album. Aptly titled “Being Funny in a Foreign Language,” this album displays a stripped-down version of the sounds we are used to hearing from The 1975. Produced by Jack Antonoff, this album uses a similar approach seen his other projects (Taylor Swift’s “folklore” and “evermore,” Lana Del Rey’s “Norman F***ing Rockwell,” Lorde’s “Solar Power”) by heavily incorporating mellow and minimalist instrumentation. This tactic showcases the vocals and songwriting while creating a heightened sense of intimacy. While I had my doubts about how this bare-bones approach would play out for The 1975, this switch worked well for the band. The risk results in a fresh, concise and reinvigorating album that stands out from the rest of The 1975’s discography. However, the instrumentation and production are not the only aspects that make this record shine.

The band’s frontman, Matt Healy, does a masterful job at adapting his songwriting to match the production. Instead of focusing on the abstract elements of human existence as he did on prior works, Healy focuses his songwriting on love’s human impact. While this songwriting might seem underwhelming when compared to previous 1975 records, it shows a sense of sincerity and emotion on standout tracks like “All I Need To Hear”, “Oh Caroline” and “Part of the Band.” There are even flashes of sounds from previous 1975 albums, notably on “Happiness” and “I’m in Love With You.” “Being Funny in a Foreign Language” shows that The 1975 is still capable of successfully overhauling their sound nearly a decade into their career. It seems they will continue to thrive artistically on future records as they expand their sound. – Maurice Crawford

hey, nothing: “i haunt ur dreams” (Single)

I am going to preface this by saying that I. Love. Halloween. I love music with a spooky aesthetic, such as “WHEN WE ALL FALL ASLEEP, WHERE DO WE GO” by Billie Eilish, anything by Freddie Dredd, and “prolly my spookiest beat” by prodby668. It checks out, then that I have been listening to “i haunt ur dreams” by hey, nothing on repeat since it released. ‘Tis the season. First featured in a TikTok clip, the song instantly went viral. The two band members, Harlow and Tyler, finally released the studio version on 10/12/22. This song is a fun indie song, something that gets lost often in the genre. However, at its core, the song is unquestionably Halloween-esque.

It has a nostalgic guitar backing, with multilayered vocals talking about a ghost haunting someone: a former lover or a friend. The story of this song is what we would all do if we were a ghost: float around, go through walls, and haunt people. However, what really shines through this song is the chorus. The “ooo’s” in the background of the chorus add to the spooky nature, and the chords are simple, allowing the song to shine. The chords are similar to “Where is my mind” by The Pixies, which lends to a nostalgic nature for a lot of listeners. I would heavily recommend giving this song a listen and adding it to your “fall vibez” playlist (it’s ok, we all have one). – Mason Dunn

Alvvays overcame apartment theft, flooding, and other roadblocks before releasing “Blue Rev,” an album filled with delightful experimental twists on the group’s already proven sound. The Toronto band’s first album in five years blends genres from intense jangle-pop to shoegaze, with soaring choruses that stick in the listener’s head long after the record is over. Last year, Alvvays teamed up with producer Shawn Everett to record the album on analog. Everett has produced albums with The Killers, The Growlers, and Kurt Vile. The opening song on “Blue Rev,” “Pharmacist”, sets the album’s tone: a light guitar leads before distortion washes over into a beautiful, twisted wave of sound. Molly Rankin’s lead vocals effortlessly float around complex, powerful melodies throughout the album. Her lyrics counteract the sprawling dreampop sound, grounding the album with intelligent songs. “After the Earthquake” was inspired by stories from Japanese writer Haruki Murakami, and “Pharmacist” details running into an ex’s sister at a pharmacy and her mentioning his “new love glow.”

“Tom Verlaine,” named after the eclectic post-punk artist, is backed by the warm glow of a droning guitar. It centers around attempted change, even when it may not be easy, with lyrics like “I know you’ll be there in the rain/just like the first night/telling me you’ve changed.” Their familiar jangle-pop sound can be seen in “Many Mirrors” and “Pressed.” “Very Online Guy” has vocal distortion, counter melodies, and rapid tone changes to deliver an erratic sound in a stand-out song. The 8-bit music video matches the nostalgic tone with bright distorted backgrounds and 80s technology. Overall, Blue Rev weaves various genres for a fresh indie-pop album that’s a perfect mood-booster, and one of my favorite releases this year. – Nick Layeux

So Barbie from “Mermaidia” got a BBL. Or, Shygirl, the preeminent sound of the UK’s underground scene, has finally released her debut album “Nymph.” Since announcing herself in 2016 with the likes of Sega Bodega and Coucou Chloe, Blane Muise AKA Shygirl has established a raucous, bawdy body of work imbued with a libidinous charge that fuels the depths of sweat-soaked clubs deep into the night. Having already collaborated with the likes of FKA Twigs, Arca, and Lady Gaga, Shygirl’s hedonistic sound of the future has been solidified with tracks such as “BDE,” “BB,” and career-high banger “FREAK.” But it was 2021’s “Cleo” that took her sound on a more romantic route, softening out her rough edges to find an emotional depth. “Nymph” rises here, out of the waves, marking a new pivot in both her discography and persona.

“Nymph” stays true to its title, transforming and manipulating both genre and emotional tone in a playful array in 32 minutes. Now, this doesn’t mean that Shygirl has gone celibate, locking herself in a monastery. Rather, sex itself, lyrically, is a metaphor for a more intimate display of emotions bubbling below the surface. Against trap-beats and smoky acoustics in “Shlut,” she states, “Is it so bad to just like to be touched?” For Shygirl, it’s clear that she’s comfortable placing herself within the taboo and misinterpreted world of sexuality. She can be upfront about her desires such as in opener “Woe,” “Missin u,” and the gynecologist’s lullaby that is “Coochie (a bedtime story).” At the same time, she possesses a vivid sense of yearning on the glitchy garage tracks “Firefly,” “Heaven,” “Wildfire”, and the Arca-produced erotic dance track, “Come For Me.”

Shygirl doesn’t do this all by herself, though. Producers like Sega Bodega, Mura Masa, Bloodpop, and Danny L Harle mix their signature sounds to create a kaleidoscopic blend of electronica, R&B, and hip hop. The blend gives the album a technical edge that plays along with Shygirl’s falsetto. “Nymph’s” reference points include Madonna’s “Ray of Light,” Tricky’s “Maxinquaye,: and Smoke City’s Brazilian infused trip-hop, recalling the 90s and Y2K in a non-obnoxious way. “Nymph” is not a perfect album, but as a debut it expands her creative capabilities into a larger realm, letting her sound run freely without fear. “Nymph” is an album that reveals itself like a rainstorm that pours into a sensual sea. – Ben Romero

In November, singer-songwriter PJ Harvey is set to release an entire album of b-sides, demos, and unreleased tracks. This is excellent news for her fans. On October 7th, 2022, she released 3 new tracks and several previously released tracks as an EP for the upcoming collection. These three tracks cover a wide range of her previous styles. “Memphis” is a raw, high-energy song about friendship and love, and particularly losing a lover. She does not shy away from her own pain, and sings about death and the difference between death and loss. Stylistically, this track is reminiscent of her critically acclaimed album “Stories from the City, Stories from the Sea.”

“Dance,” is a lo-fi track that sounds like it was written for her debut album, “Dry.” The lyrics are abstract: the chorus is about how she dances, while the verses are about a girl’s somewhat depressing life and death. Part of the brilliance of this track is the upbeat guitar riff with brutal lyrics. The final new track, “Wait,” reminds me of “Stories from the City,” but maintains the grittier sound of her earliest albums. Lyrically the song is about waiting, but has a dark undertone of mystery. This is something Harvey has always excelled at. She keeps the listener on edge by not elaborating on what is unsaid, giving us a sense of unease. I recommend this project for fans of singer-songwriters. I am very excited for the 59-track album on November 4th. – Alli Seamans

Click below for a playlist of music featured in this article.