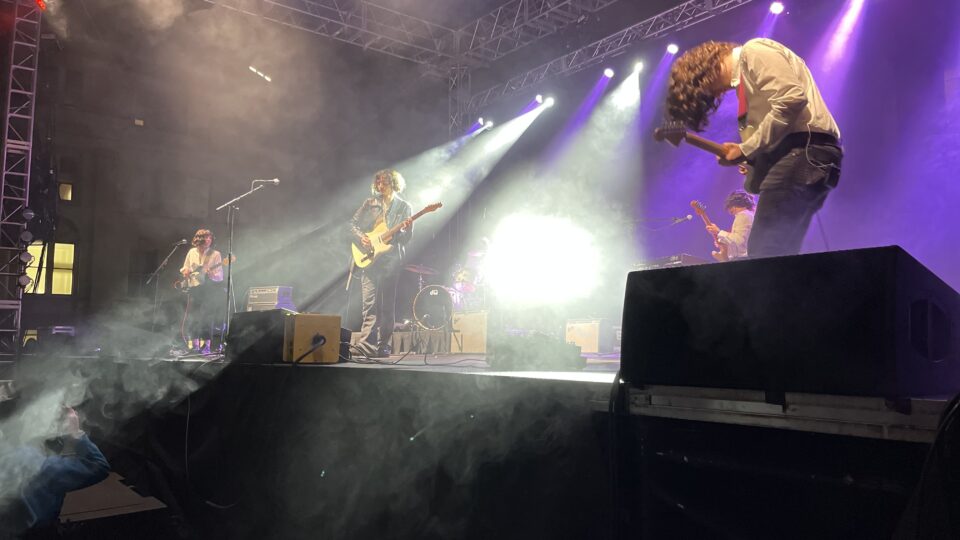 This year, Scope Productions brought Sir Chloe and NoSo to Iowa City for the homecoming concert.

NoSo, the stage name for indie-bedroom-pop artist Baek Hwong, opened the show. They played songs off of their debut album, Stay Proud Of Me, released in July. The record is a self-articulation of Hwong’s coming-of-age, written and produced over the last three years. It encompasses themes of compassion, shame, and the intersectionality of being queer and Asian-American.

Throughout the show, Hwong invariably stuck to the languid, ethereal vocal style that is hallmark to the indie genre. The singing was well controlled and seemingly easy for them. With a lot of static hooks, one-line choruses, and lack of physical exertion on stage, I found the singing serviceable, rather than impressive or special.

For me, “Feeling Like a Woman Lately,” was NoSo’s highlight. The gentle vocals worked well with the iridescent guitar, and the intricacies and layering at the close made the best ending as well. In contrast, most of the other songs’ endings felt inconclusive and sudden.

Even with that praise, I still wish that there was more range in tempo, instrumental composition, energy, anything to take the performance out of the soft range/ For instance, instead of using secondary playback vocals in “Man Who Loves You,” have those vocals come from a band member. That would add more body to the music’s aesthetic.

My sentiments were similarly echoed by the audience, who cheered the moment that the music became even the slightest bit more energetic, denser, or faster. We were itching for more! As one audience member put it, he “felt like the songs could have been extended longer to build to a climax.”

I most liked watching the bass player, Jade Fink, because she seemed the most comfortable on stage as conveyed through her dancing.

The audience was attentive and calm, which reflects NoSo’s demographic of “nice and respectful” people, according to their interview with Scope member Myles Evangelista.

In between songs, Hwong built a rapport with the audience, alternating between crowd pleasing zingers and dry, teasing banter. It was just likeable and personal enough that the audience would undoubtedly cheer. The performance ended with kind gratitude towards the students. “Their vibe was really good,” said one audience member.

In between shows, all the Halloween-costumed students tried to recoup their body heat. The elves and Velmas and fairies huddled on the Pentacrest at a standstill for twenty minutes, thrumming in pre-show excitement.

Eventually, four individuals walked on stage one by one. Each band member bore the same cropped, black wig, button down white shirt, and black pants. The suspenseful guitar created intense, titillating tension. Everyone was aching for the lead singer of Sir Chloe, Dana Foote, to come into view.

One thing I will commend indie concerts for: the relaxing studio mixes are often discarded in favor of a more lively alt rock translation. With added guitar solos, kinetic crowds, and beats that detonate your ears, Sir Chloe drowned us in their talent.

Not every band member was equally energetic though. Lead singer Dana contrasted the band with how much less energy she exuded. She usually looked bored or in pain, even during “Michelle”, the song that spurred the most screaming, singing, and dancing from the audience. Compare that to the lead guitarist, who never stopped moving throughout the show, or the bassist player, who found a way to be charming when her wig fell off.

The most physical energy Dana gave was occasionally walking around and bobbing. One audience member remarked, “The vocalist has very deliberate movements.”

The few times Dana she interacted with the crowd, she had the same dry persona. I sensed a disconnection from the audience, which was odd, considering that the audience was fairly enthusiastic. Despite her stage persona, I don’t think Dana was ungrateful, or didn’t enjoy performing.

Stage presence aside, her vocal style reminded me a bit of Lana Del Rey. It had that same sort of lilting whine, but a bit more flat (intonation-wise, not pitch-wise). Sometimes, I couldn’t understand what she was saying because her mic levels were too low. I could tell she was saying something, but the words were lost in the instrumentals. And I couldn’t hear the bassist’s secondary vocals at all. But when the lead singer was audible, she had clear enunciation.

I enjoyed the band’s guitar melodies and tones. They guitar carried the momentum for me, especially in “Feel Again” with its chugging percussion rhythm and wide dynamics. However, I wish the music had more varied texture. A lot of songs started out small, then picked up. In Sir Chloe’s defense, I don’t usually expect artists to start evolving their sound until after their second album. Looking forward, maybe Sir Chloe can make their choruses more complex and/or have more singing in their upper mix.

If I was already a Sir Chloe fan, hearing so many unreleased songs would have made me ecstatic. Seven new songs, including the next album’s title track and a festive cover, would be heaven to any fan.

After thirteen songs, Sir Chloe “ended” their show, but quickly came back to the stage for a two song encore. Thankfully, the break wasn’t long, because it was quite cold outside. The encore didn’t particularly stand out compared to the main show.

Even if NoSo and Sir Chloe don’t adhere to my music preferences, I liked the concert and was glad to attend.