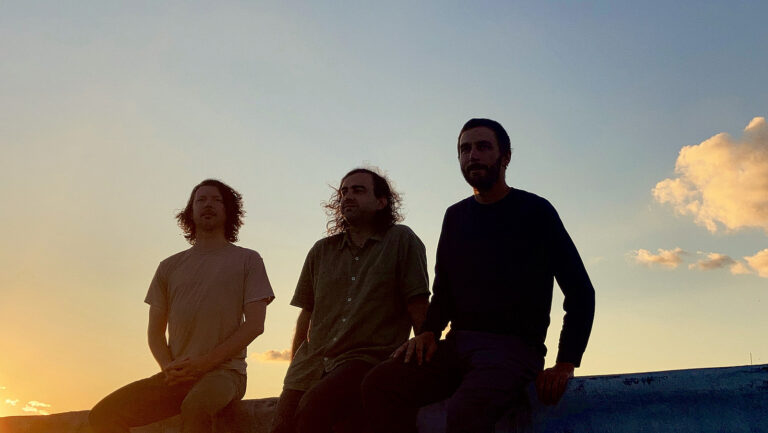 The cold began to roll in on Thursday night, marking the end of joyous warmth for the rest of the year. An escape was found at the Trumpet Blossom Café on East Prentiss St. in downtown Iowa City. Along with a nice warm atmosphere, the vegan restaurant by day/music venue by night hosted Bitichin Bajas, touring their new album “Bajascillators,” with guest opener Jon Mueller.

Mueller, a musician from a small Wisconsin town that even he claimed he didn’t remember the name of, started the night off with a forty minute long song. A faceless figure hidden behind an array of gongs, he pummeled them with machine-like intensity and precision. The droning brass sounds resonated through the room and into people’s minds. Bleak images curated dreadful anxiousness and wonderful bliss all at once.

Bitchin Bajas opened with “World B. Free,” and “Amorpha” from their new record. Glazed in red light, they echoed out songs from their synths that gave the listener a sense of gliding through a quiet, empty yet still bright, nighttime cityscape. Over a series of cycling bass lines, gleaming chimes twinkled in the air, like distant far away city lights. It was all characterized by a soothing, ambient vibe.

The show continued with interesting electronic sounds meshing with a haunting organ and mystifying flute. As the trio sat back, peaceful reverberations filled the atmosphere. It all sounded like images of the ideal future.

The energy grew more intense on the song “Quakenbrück,” as thick bass lines lay underneath a swirling sonic wall of sound. A long, wailing synth danced along with rhythmic beeping. At this point, every member of the band was lost in the music. One of them turned knobs like a sorcerer rubbing a crystal ball. Another played the keys like a receptionist at a typewriter.

Bitchin Bajas concluded with a cover of Sun Ra’s “We Travel The Spaceways,” the night’s only vocal performance. It was backed up with a lethargic yet funky baseline, along faint synths that glimmered like stars. The beautiful, modulated vocals rang out.

A sound so soothing that one would never get sick of listening to it. A sound so mesmerizing, it could lift a person up high above the Earth, to then travel from planet to planet. It was a fantastic high point to end the night.

Bitchin Bajas spacious “Bajascillators” is out now on Drag City and available for streaming.