Tags: Des Moines rock, Did I Miss It? Is it Over?, indie rock, iowa city, krui, krui 89.7, KRUI.FM, Like a Tiger Lily, mission creek, Negative Space is a Positive Thing, Ramona & the Sometimes, RATS, Station Wagon, university of iowa, Where Ya Been 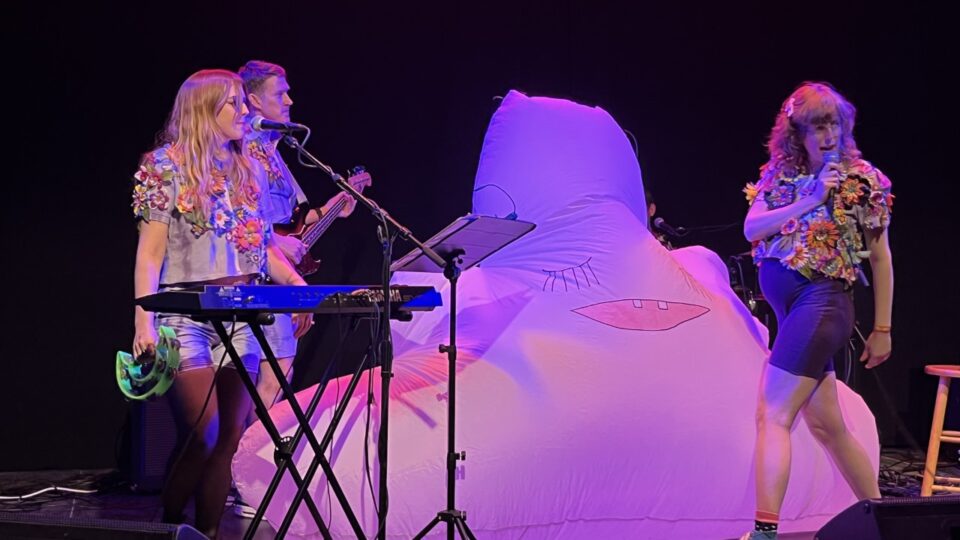 Ramona & the Sometimes gave a passionate performance at the Riverside Theater Saturday evening. Despite being six months pregnant, Ramona Muse Lambert, the lead singer, gave the performance her all. She kicked off the concert singing alone before the band’s accompaniment erupted behind her.

In between songs, Muse Lambert reminisced over humorous stories involving the Mission Creek festival where she and her husband, Derek, met. Ramona and Katelin Brown, keyboardist, joked about their upbringing. “We’re both country girls, so we call Mission Creek ‘Mission Crik,’” she said.

RATS’s set-list featured songs from their upcoming album Did I Miss It? Is it Over? and other groups they performed in. The band played hits such as “Lung Sandwich” and “Where Ya Been” from the group’s debut album, Negative Space is a Positive Thing.  “Like a Tiger Lily,” one of Muse Lambert’s favorite songs, debuted in concert.

Another song that reflected the group’s evolution was “Station Wagon,” a song Muse Lambert referred to as an example for her songwriting. She loves writing songs where on the “sixth [listen]… you’re like, wait, this song is about dying. I like subtleties in [my] music.”

The performance hinted at a more mature sound in their new album, filled with complex rhythm patterns and a variety of catchy choruses. This evolution has been facilitated during the five-year period between albums shined during the concert, especially evident in the drums. Derek Muse Lambert pounded complex, frenzied fills to give RATS’s songs a fresh sound.

The concert concluded with “Where Ya Been,” a song that Muse Lambert cherishes. “[I’m] overwhelmed with emotion [when performing].” The song came from 2014, and she wrote it “when [she] was uncertain about where things were going… But like, I knew I was in love.” In fact, one of her favorite things is when people tell her that “Where Ya Been” is ‘their song’. In the concert, Ramona radiated passion as she poured herself into the song, belting the final chorus with vigor.

Ramona & the Sometimes’ next album, Did I Miss it? Is it Over? will release April 30th. The album cover features Ramona’s two kids in vibrantly knitted flame hats created by Ramona’s mother. The next and final concert for a while by the group is their album debut performance at Des Moines’ xBk, located 1159 24th Street. Pre-order Ramona and the Sometimes’ upcoming album here.