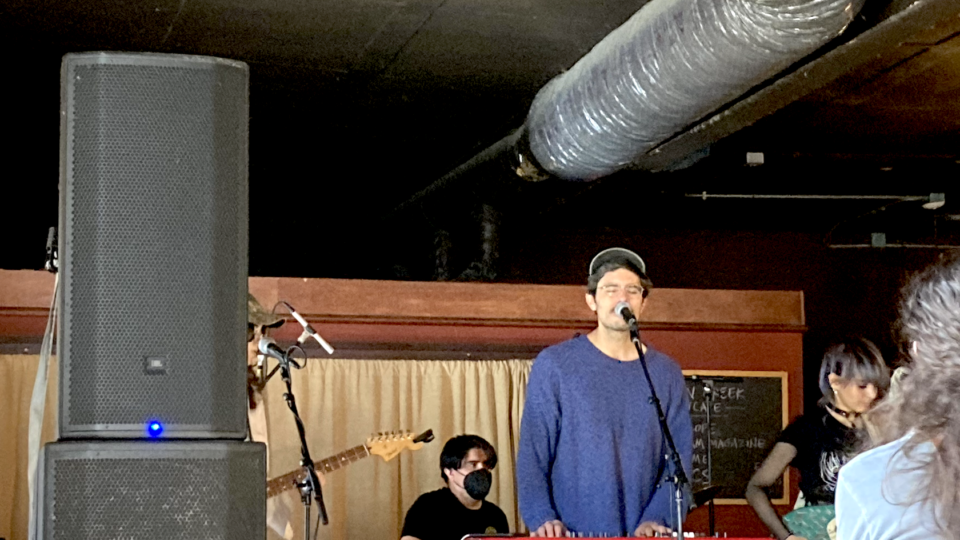 The man behind the band moniker, Joe Stevens—tends to have a rotating cast of musicians filling out the group—brought on drummer Brian Alvarez and dual bassists and vocalists Harmony Index and Marina Aguerre and they melted seamlessly into the sonic landscape of Peel Dream Magazine.

Much of the performance centered around creating atmospheric dream-pop of breezy drumbeats and heavy 90s-influenced synth, which was cut with a certain lightness and effortlessness from the use of dual male-female harmonies. Harmonies during the set were less lyric-driven and more dependent on instrumentation to complete the sonic soundscape in a perfect, deeply vibey blend. Sometimes the singing transformed into perfectly timed and beautiful, rhythmic vocal beats.

Even with the influence of heavier college rock in the performance’s drowsy synth, there was also a playful whimsy to the band’s percussion that broke through the wall of glittering keyboard and bass lines. Peak whimsy hit whenever Stevens would break out staccato notes on the keyboard in the midst of steady sound, reminiscent of an ice cream truck jingle—crisp and delicious.

Currently on tour with fellow Mission Creek performer Soccer Mommy, Peel Dream Magazine filled the festival’s smallest venue with warmth fit for a space triple the size. The biggest rush of every song was once the guitar and drum melodies delivered their final notes and Stevens remained, holding the final chords on the keyboard. With the haunting remnants of the last song’s essence still hanging in the air, Stevens stood like a solemn organist, basking in drawn-out chords.

The lasting echoes and vibrations made each performance, from the bouncy, sunny synth tracks to the gloomy grunge pieces, linger with the audience and created a sonic experience of a rolling atmosphere, rather than a set of bite-sized tracks. This choice greatly aided the compact set-length and intimate setting of Trumpet Blossom. The concert setting itself and the laidback style of Peel Dream Magazine’s performance set the show apart from the majority of Mission Creek, feeling more like a jam session with old friends.

With little time to talk between tracks, the audience got the best sense of the band as they stood in the audience supporting and watching the rest of the afternoon’s sets. Their spirit of camaraderie made it clear—everyone was just happy to be there.