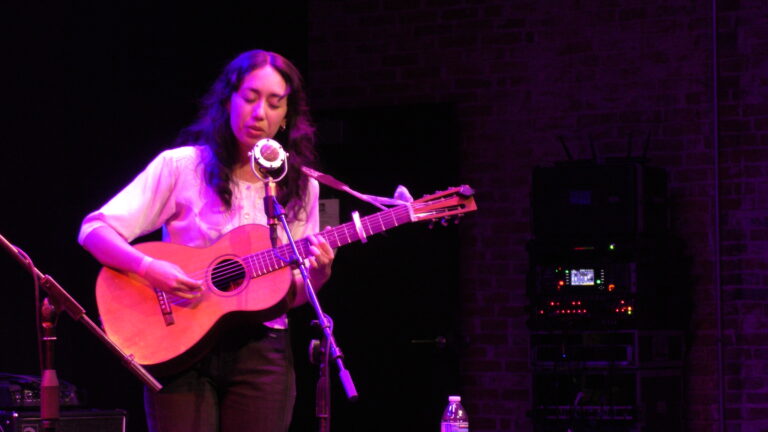 Haley Heynderickx played a set of her beautifully endearing folk tunes accompanied by upright bassist Abbey Blackwell at the Riverside Theatre the night of April 8th. The theatre seats 150 people or so, but the venue was packed and buzzing. Acoustic shows with just one or two people can be nerve-wracking for the artists, but it only took a few wittily whimsical words from Heynderickx to get the audience laughing.

“We’re from the Pacific Northwest. That’s why we talk soft,” Heynderickx said before launching into the first song of her set, “The Bug Collector”. A couple of things were immediately apparent, which would apply to the set in full. One–the only rhythm section this song really needs is the pizzicato of the bass, which supplies a bouncing sway to even the most emotionally harrowing of her songs. The same is true of many of Heynderickx’s other songs. Two– Heynderickx is an excellent guitar player, and one of the best I’ve seen live. It may be that I’m extra sensitive to great fingerpicking, but her quick and precise playing was downright dizzying at times.

Both her guitar playing and singing were dynamic performances. She portrayed the pain of “No Face” just as intensely as the confidence of “Oom Sha La La.” This song was an instance of bright, simple guitar strumming in a set of mostly detailed fingerpicked patterns. Between songs, she’d muse on sunsets, a Spirited Away character, and how redwood trees would make better world leaders than humans–you know, Haley Heynderickx things. In a new song called “Tour Song,” she did something I’ve never seen an artist do before, which was tuning all the way through the song and working the whir of the string into the guitar melody in a way that felt surprisingly natural.

Speaking of new songs, the new songs are great! It’s been about four years since Heynderickx officially released new music and hearing these songs made me feel as if I’d been granted access to highly classified information. There’s “The Park” which teased laughter out of the audience with the inflection of her voice alone, “Louis and the Redwoods” re: the earlier redwood comment, “Ben I’m Trying” about living with a partner throughout the pandemic, “Sorry Fahey,” she said, “because it sounds like a John Fahey song,” and a couple of others too. As a longtime fan, these songs seemed noticeably more cheerful than much of her older work–something that made me glad to hear.

The two closed the set with “Untitled God Song,” an occasion for which Heynderickx pulled out a steel slide, and Blackwell pulled out a bass bow–the second time it was used that night. They broke into a climactic jam in the breakdown before the last chorus, which rocked as hard as two acoustic instruments can rock. With these two musicians–it rocked pretty hard. Heynderickx left the audience overjoyed with the set and more than excited to hear these new songs put to record.