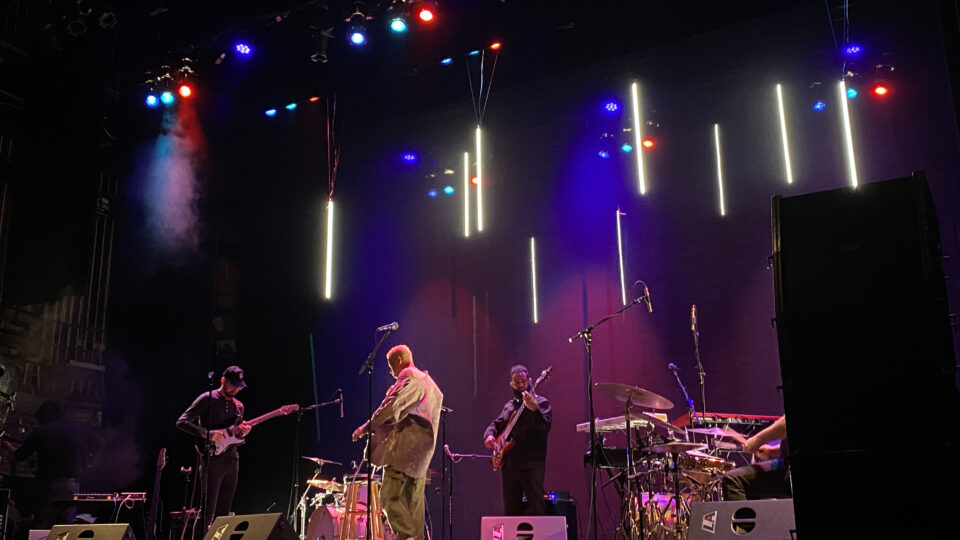 Alyx Rush got Thursday evening at the Englert Theatre off to a great start with his half-hour set. He took the stage a little before 8, quietly taking a seat on a wooden stool. Slowly, his supporting band—a guitarist, bassist, and drummer—began to play a series of soft guitar riffs and drum patters to set the mood.

After a minute or two of quiet instrumentals, Alyx picked up the mic. He held the microphone a short distance away from his face, but his voice carried easily and filled the Englert with a rich, full sound.

It’s hard to describe just how good Alyx is at singing. It seems effortless to him, taking on various vocal runs and belting out his lyrics. He immediately captured the audience’s attention and soon everyone was swaying and nodding to the rhythm.

After the first song, Alyx stood up and introduced himself, thanking the crowd for coming. “I was really expecting like five people to show up, including my mom… hi Mom,” Alyx said, sheepishly.

After this short talk with the audience, he began his song “Runaway,” one of his few tracks available on Spotify. In addition to Alyx’s lovely vocals, “Runaway” featured an impressive guitar solo.

“Runaway” was followed by a spoken interlude that sounded like something you might hear on SZA’s Ctrl. This eventually transitioned into “Body Rock,” their latest single.

After “Body Rock,” Alyx performed a cover of Rihanna’s “Stay,” in which he invited the crowd to sing along. He also brought on special guest Jim Swim to rap a verse on a new song called “Trouble.” Alyx then announced that he and Jim Swim were working on a four-song EP together, aiming for a summer release.

He closed his set by performing “Gimme Life” from his upcoming EP. It featured strong drumbeats and a slightly more upbeat melody than the earlier songs, like something that might be played at a relaxed house party. Alyx’s show ended with standing applause from an impressed crowd. After a stressful week and a hectic day, it was a great way to spend a Thursday evening.

It wasn’t until after the show, though, that I witnessed one of the most striking qualities about Alyx Rush. While waiting for the next artist, Tennyson, to take the stage, Alyx came up to two audience members in the row behind me and thanked them for their energy during his show. He said that seeing them dancing in their seats helped him to be less nervous during his set. The audience members were flattered, and they giggled in delight as the singer walked away.