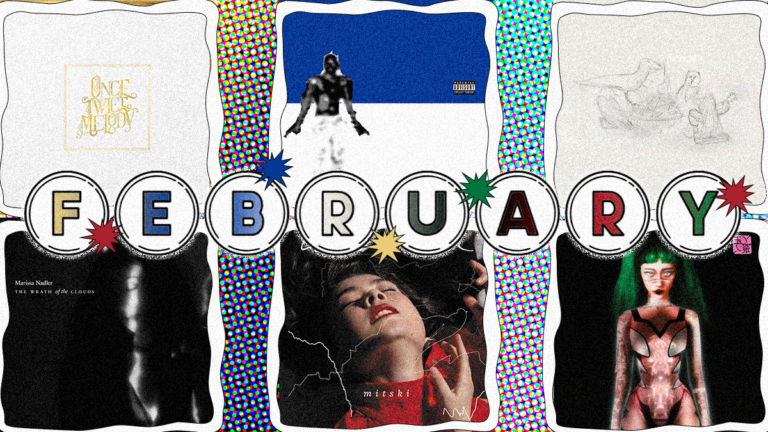 The latest release from Beach House is a dream pop behemoth. Released in four installments, this double LP brings a new spark of ambition to the duo’s recent catalog. Once Twice Melody may not offer the catchy singles of their previous works, but instead patient, meditative songs with a diverse instrumental palette. The second track, “Superstar”, is an excellent example of what makes so much of this album great. The melodies are simple, but the production is miraculously intricate–sampled and repitched vocal recordings from Victoria Legrand make for a great addition to the soundscape. She sings of loss, but with an acceptance that brings comfort to the song. The warm memory is eroded by time and the pain has lost its bite. “New Romance” is a cheery moment in the tracklist and brings one of the most straightforwardly catchy choruses on the album. “Masquerade” rocks a propulsive beat and a variety of eerie synth tones. A consistent theme across the album is time and its passing–a recurring lyric is “Days go by.” In a sea of releases marketed as “quarantine albums”, Beach House has captured the feeling of expanding time without needing to be so obvious. They have created an album where its form complements its content in a way few artists can. Decades into Beach House’s career, they continue to hone their sound on the impressive Once Twice Melody.

Where to even begin with Glitch Princess? We could talk about the cavernous ambience full of synths and industrial noise, the child-like delivery of yeule, the menacing aesthetic that permeates the album. All of it works to chilling effect, but it would just ring hollow if it weren’t for the lyricism involved. This certainly isn’t for the faint of heart. Self-harm, eating disorders, drug use, hatred, loneliness; the list goes on. Hell, they introduce the album with the lines “I like crushing up rocks and snorting them.” The hyperpop scene has never been one to shy away from difficult material, even if it’s covered in a glossy finish, but Glitch Princess is at a whole new level of despair and disgust. Except, that’s only half the story. Sure, we all love a good downer of an album, but Yeule recognizes the importance of existence as resistance, of carrying on even when it’s hard. That shines most on the highlight of the album “Don’t Be So Hard on Your Own Beauty.” The drones, the synths, everything comes to a halt, leaving only guitar and a pitch-shifted yeule who remarks on the joy of being in a relationship that allows for mutual understanding and compassion in the face of trauma: “You turn this horrible place into orange light, sunset in sight / You tell me not to be so hard on my own beauty.” It’s a moment of, well, beauty that allows you to take a breath before diving back into the darkness. As the world seems ever darker, it’s nice to see an artist like yeule who can understand and work with the knowledge that there’s always a glimmer underneath the murkiness of reality.

Big Thief – Dragon New Warm Mountain I Believe in You

Indie folk rock heavy-hitters Big Thief return with their newest release Dragon New Warm Mountain I Believe in You. With a title that long and a tracklist that is equally lengthy, one may be deterred thinking that the record is pretentious or bloated. However, this is indeed not the case as every track in the album’s 20-song tracklist demands its own attention and deservedly so. The record as a whole sees the band exploring a softer and more sentimental sound than their previous works while retaining all of their signature emotive poetry. Songs like “Dried Roses” and “Change” show the softer side to the band with the warm melodies of the acoustic guitar, steady beat of the drums, and lead singer Adrianne Lenker’s typically scorched and empathetic vocals. On other songs like “Time Escaping” and “Heavy Bend” the band experiments in a sort of shuffling percussion with somewhat echoic production value, and shows off an uncut side with the inclusion of guitar noise, small verbal cues, and initial stumblings before the beginnings of songs. All of this adds to the pervading rawness of the record in both its instrumental palette and emotional thematic leanings that give this record its potency to not just endure the lengthy 20 tracks, but consistently impress and encapsulate.

Underground hip hop mainstay, Cities Aviv, presents the world with a groovy and experimental amalgamation of samples in his new album, MAN PLAYS THE HORN. Based in Memphis, Tennessee, the rapper and producer began his career with a mixtape titled BLACK PLEASURE 2012. The initial tape blew up in underground rap circles around the country, cementing his name as a promising force in the experimental hip hop community. Cities Aviv develops a melodic and mature approach to this new album; meshing together his dilapidated and driving song structures with that of a variety of samples, mainly from classical and R&B ballads. This dichotomy that comes from the spastic nature of the tracks and his use of harmonies and pleasant chords results in enjoyable and head-hanging production. This, coupled with Aviv’s intentional bars and witty one-liners creates an LP that will do more than please the audience for a few listens – it creates an LP that will outlast most of the others in your rotation.

Marissa Nadler – The Wrath of the Clouds EP

On The Wrath of the Clouds, a companion EP to last year’s excellent The Path of the Clouds, Nadler continues to flex her magical songwriting capabilities and offers a couple of covers as well. While at times this project may not have the same attention to production as its full-length counterpart, the detailed storytelling and memorable performances make these songs anything but cast-off extras. Nadler delivers what she’s perfected over the years–dark folk tunes with somber tales to share, and in recent work especially, songs that absolutely drip with an eerie atmosphere. The opener, “Guns on the Sundeck”, tells a wartime horror story over tight acoustic finger-picking. The droning ambiance and interjecting wails of electric guitar make for a haunting start to the EP. “All the Eclipses” sounds like the heavier sequel to “All the Colors of the Dark”, and it’s worthy of this appraisal. A scuzzy, tavern-ready guitar tone provides a backbone to the track as Nadler sings of reeling from loss. The covers, with their electronic drums, give the sense of a more lo-fi recording setup.  Her cover of Sammi Smith’s “Saunders Ferry Lane” is great as expected, but especially her cover of Alessi Brothers’ “Seabird” is a wonderful surprise. The way in which Nadler incorporates her own shoegazey style while leaving the song’s yacht rock sensibilities intact is stunning. On The Wrath of the Clouds, Marissa Nadler gives us everything we need–that being more Marissa Nadler.

Mitski’s one of those artists who seem to always surround certain corners of the Internet, to the point that even without ever listening to a full album of hers, I pretty much thought I had her sound and style figured out. And then Laurel Hell arrives. While that classic Mitski style is still there, her mournful lyrics over a sparse musical backdrop, this release really shows how far she’s grown since her debut back in 2014. The sound of the ’80s permeates this album, from the New Romantic xylophone chords on “Should’ve Been Me”, the Blondie-like “Stay Soft”, and the synthwave drive of “Love Me More”. It all works to great effect, even with the addition of comparably standard Mitski songs like “Working for the Knife”, the songs mesh well together without any one sound overpowering the other. For those who have wanted to get into Mitski, I can’t think of a better album to start with than this. It’s the sound of an artist at a crossroads, experimenting, yet refining their music. And God help us all when Mitski finally reaches that apex. You might as well reach for the tissues now.