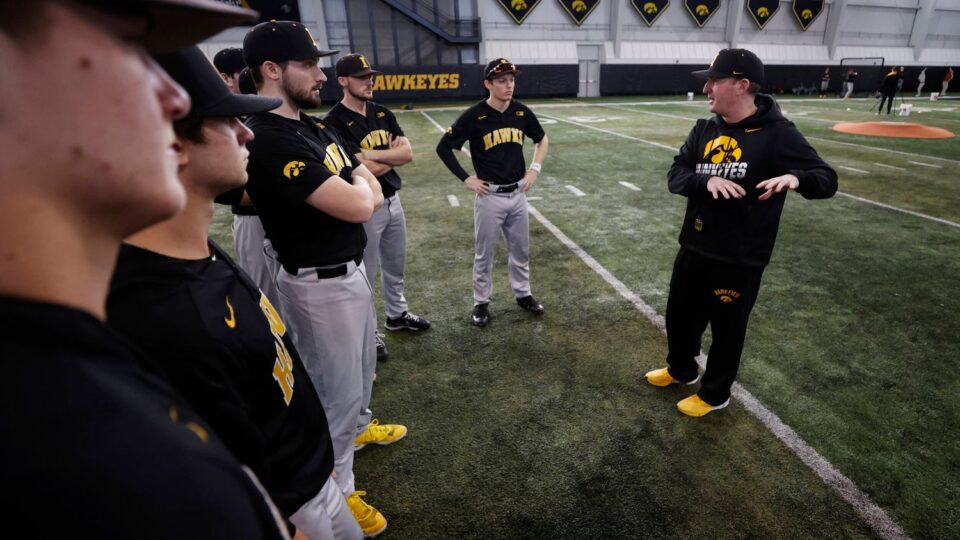 Head Coach Rick Heller and the Iowa Hawkeyes opened their season this past Friday with a 12-2 win down in Charleston, South Carolina against the Air Force Falcons. Air Force is predicted to finish third in the Mountain West, after securing their first ever winning season in conference play last season.

South Dakota State transfer and redshirt sophomore Adam Mazur started on the bump for the Hawks. After giving up a solo shot in the bottom of the first, Mazur went six innings with nine strikeouts, retiring the final 16 batters he faced. Mazur had a breakout season last summer in the Cape Cod League after an inconsistent first 2 seasons with the Jack Rabbits. He recorded a 1.55 ERA while chalking up 34 strikeouts in 29 innings during this time. Despite racking up attention from schools such as Alabama and Purdue, Mazur stayed certain Iowa was the right fit for him. Mazur is rated as the no. 89 player on MLB.com’s top 100 draft prospects while being the no. 2 prospect in the Big Ten. Hawkeye fans, stay on the lookout for #33 as expectations are high for Mazur this season. He has become a crucial piece in the pitching rotation, with Saturday’s performance showing exactly why.

LHP Cam Baumann, a returning weekend starter, came in for relief and got five more strikeouts in two innings. Baumann is a seasoned veteran whose experience will be valuable in the success of the team, whether he is a consistent weekend starter or not. West Des Moines Valley alum, Benjamin Detaeye, made his first collegiate career appearance when he entered in the ninth inning. Things didn’t go smoothly for Detaeye, who recorded only one out and loaded the bases before redshirt sophomore Jacob Henderson came in to finish the deal. Even with a few opening day jitters, there’s not much else you could ask for as a fan or coach as the Iowa pitching staff combined for a one hitter.

The Hawkeyes clinched their second win at the Swig & Swine Classic, defeating Ball State 11-1 after another strong team performance.  Ball State finished runner-up last season in the Mid-American league and is projected to finish there this season as well. Starting on the mound was right-handed graduate transfer Connor Schultz, who went 2-5 at Butler last season. As key pitchers Drew Irvine and Trent Wallace were selected in the most recent MLB Draft, Schultz looks to fill the role of “next man up” this season. After missing fall practice due to the same hip surgery as Hawkeyes Jordan Bohannon and Connor McCaffery, Schultz had a solid first outing. He went four innings with nine strikeouts while surrendering one run off two hits.

True freshman Brody Brecht out of Ankeny, Iowa, had his collegiate debut when he came in at the start of the fifth inning. Brecht, who just recently hit 100.7 mph and is rated as the no. 1 MLB prospect in the B1G 2024 class, was absolutely lights out. Brecht recorded seven strikeouts propelling him to his first win of the season in just four innings. Brecht showed no signs of regression Saturday morning despite being a two-sport Iowa athlete and it seems he is just as untouchable as he was in high school.

To close out the game, Michigan State transfer and redshirt sophomore Will Christophersen came in and recorded a rare four strikeout inning. Christophersen had a solid year out of the bullpen with the Spartans last season, registering a 2.45 ERA with 39 strikeouts. He will be a huge arm moving forward for the Hawkeyes.

Iowa had another strong offensive performance as right fielder Keaton Anthony led the way with four hits (two of which were homers!) and five RBIs. Brayden Frazier also had a great game at the plate going 3-5 with two RBIs and scoring two runs himself.

The last day in Charleston came with a matchup against Bucknell, who is projected to finish fifth out of the Patriot League. The Hawkeyes edged the Bisons 3-0, completing an opening weekend sweep. True freshman and Iowa City native, Marcus Morgan, started on the hill for Iowa. By the time Morgan finished his senior year, he had Division-1 offers in baseball, basketball, and football. But, the 2021 Gazette Athlete of the Year chose to pursue baseball at Iowa and has already amped up his fastball velocity to a consistent 93-94mph since the fall. Morgan, who is the first true freshman to win a spot in the starting rotation this early in the season under Heller, looked confident in his Hawkeye debut. Morgan went four innings with six strikeouts, yielding one hit.  It will be exciting to see his progression throughout the season as he works to maintain his weekend starting spot.

Sophomore Ty Langenberg out of Urbandale, Iowa, came in at the start of the fifth inning. Langenberg totaled four strikeouts before he got into a little trouble late in the eighth, as Bucknell had the tying run up to bat with two outs. No harm was done though, as closer Dylan Nedvad came in to finish off the Bison, retiring their last four batters. Nedvad played both infield and outfield last season, but has switched to a permanent bullpen guy after leading the team with nine saves. We could definitely see Langenberg try out a mid-week starting position at some point this season, as Heller is exploring all options for the most efficient rotation. The resiliency of the pitching staff was nothing but encouraging this weekend, and it looks like the young newcomers are fitting right in.

Iowa had a slower day offensively, but third baseman Sam Honjar had a solid day going 3-4 and plating one run. With the offense struggling early, it allowed Iowa’s pitching staff to battle in a tight game, which will only make them better. Brendan Sher also had a strong day at the plate, going 2-3 with two RBIs, with the last RBI coming from catcher, Brett Mcleary.

The Hawkeyes will be in Corpus Christi, Texas next weekend for the Kleberg Bank Classic where they will face off against Pepperdine, Texas A&M CC, and Wichita State.