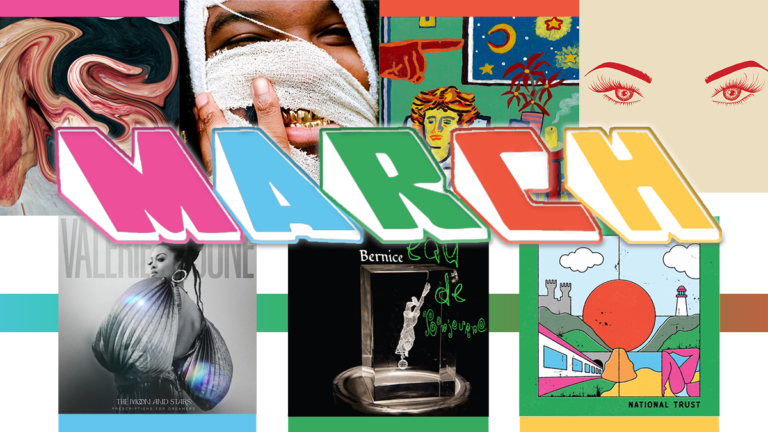 Xiu Xiu are masters of getting under your skin and showing you how to feel uncomfortable. Their last release, 2019’s Girl With Basket of Fruit, is one excellent example of this. It not only touches on themes related to intense sorrow and agitation, but also proves exactly why they are one of the most beloved modern-day noise acts. OH NO is no different with its unsettling nature and gripping intensity. This album is marked by dystopian rave beats and sinisterly sweet melodies, such as on the opening track “Sad Mezcalita” and later on in “One Hundred Years.” It also boasts a feature on every track from a number of big names like Sharon Van Etten, Chelsea Wolfe, and Alice Bag, weaving their guests’ vocals in with the quivering delivery of vocalist Jamie Stewart. While not as gut-wrenching as many of the songs on their prior release, the harrowing and noisy production matched with often unhinged melodies, vocals, or lyrical content still worm their ways into your ear and deep within the folds of your psyche to test just how intimately you are willing to get with your darker humanity.

Rappers billy woods and ELUCID form Armand Hammer and team up with producer The Alchemist to deliver one hard-hitting verse after another over jazzy, experimentally-tinged beats. By now, the two MCs have developed a strong rapport—their poetic and often confrontational bars collide with electricity, all with a bluntness familiar to their work. As far as vocal chemistry goes, the pair has lots. ELUCID’s smokey rasp contrasts billy woods’ powerful shout excellently. The duo stands apart from their competition in lyrical content especially, whether they are reflecting on the post-colonial era, Blackness, or pained nostalgia. Some verses detail a specific experience, while others are a dizzying scattershot of metaphor and dark imagery. There are some surprises in the tracklist—like the blissfully triumphant “Black Sunlight,” featuring vocalist KAYANA, where the rappers spit some of the most uplifting verses of their entire catalog over a celebratory horn sample, or the album closer, “Stonefruit,” where ELUCID passionately pulls off a forlorn melodic flow. Other highlights include the emotionally resonant “Falling Out the Sky” with Earl Sweatshirt and  “Chicharrones” with Quelle Chris, where woods and Chris meditate on the US police state and responding movements. Without compromising their style, and with The Alchemist handling the beats, the duo has made HARAM their most sonically approachable album, while also making it one of their most memorable releases.

Valerie June – The Moon and Stars: Prescriptions for Dreamers

If the chaos of the world makes you want to turn off your phone and lay in the middle of a field, don’t panic–Valerie June is here to pull you out of time. This album is a masterpiece of Americana that sounds both instantly classic and humble; intimately dreamlike. June’s Appalachian croon is at turns reedy, raspy, and ethereal. “Call Me A Fool” is a powerful, bluesy lament, while “Stardust Scattering” hushes to a musing whisper to build space for a layered, jazz band crescendo. “Smile” is a sunny, drum-driven highlight that may just become my new pandemic mantra. The Moon And Stars: Prescriptions For Dreamers is an album for walking at dusk as the raw edge of spring fades into summer. Watch the trees bud, soak in the music, and lose your worries in June’s reassurance that the passage of time soothes all–regrets, loves, and lost dreams.

It’s difficult to make music that sounds simultaneously nostalgic and refreshing. Go too far on one side and you run the risk of treading the same ground as other bands before you. Fall on the other, and you can lose out on fans by becoming too experimental for your own good. Luckily for us, dad sports does it effortlessly on their debut EP. From the very first strains of “out 4 a breather,” the chiming guitars bring to mind the jangling sound of twee pop. And the reminiscing doesn’t end there. “if u want to !” sounds like the best song of 1994 college radio updated with the comfy synths of modern-day bedroom pop. Instead of bludgeoning the listener over the head with arcane references, dad sports takes the true 90s route of simple lyrics that cut to the heart of the particular feeling. “I’m feeling nervous again, though it doesn’t take much these days,” could sound sappy with no context. But add in the shimmering guitars and the impassioned vocals, and the lyrics take on a whole new meaning. dad sports makes you want to turn to the left side of the dial yet again, in the freshest possible way.

One of the most exciting releases of the year thus far, Bernice’s Eau de Bonjourno, is one not to miss. This is the band’s first release since 2018, and it’s clear the three-year break was well worth the wait. Featuring strange harmonies à la Bill Wurtz, nonsensical lyrics, and unusual production techniques, this album has everything someone venturing into the experimental realm of pop music needs. The two opening tracks make the direction of the record clear to the listener: it’s going to be a rollercoaster ride, and you’re not going to have any warning as to when the turns and drops will come. But when they hit, they hit hard. Whether it’s an atonal sax solo or glitchy bouts of silence, this album defies expectations at every corner. A personal favorite, “Big Mato,” is a song dedicated entirely to the construction of the perfect salad, inviting the listener throughout to participate in the described act of creationism. Additionally, “Personal Bubble” has one of the catchiest hooks I’ve heard in a while, constantly flipping back and forth between inviting and denying the listener entrance into their “personal bubble.” It may not always be the most danceable, but if you’re searching for something new, exciting, and at times whacky, then this is the album for you.

Louisahhh – The Practice of Freedom

On Louisahhh’s debut record, everything is at her command. From the throbbing mechanical snare hits of “Love Is a Punk” to the eerie dystopian soundscape of “Hunter / Wolf,” The Practice of Freedom is 47 minutes of unnervingly tight industrial techno beats, turned into a rebel anthem of sexual freedom through Louisahhh’s authoritative control of every detail. From her gritty yet tender vocals to the steampunk aesthetic, every moment demands the undivided attention of the listener. Each track is unapologetically indulgent in its own sound, often relying on repetition and loops but never growing stale. The aptly named “Chaos”, for example, is an exchange between a hard mechanical beat and a string of sexually evocative and progressive text spoken through Louisahhh’s subtle but ever-present whisper. Every other song is likewise forward-thinking, and each fights for its own right to survive on the tracklist. “Master” is the closest thing to a ballad that the album provides, with Louisahhh describing her experience with love, sexual exploration, and self-discovery. As The Practice of Freedom progresses, the mood becomes deeper and darker, with tracks like “Corrupter” descending into glitched-out chaos—the soundtrack for a nightmarish but addictive fever dream. From front to back, The Practice of Freedom provides a refreshingly honest voyage into the human psyche and is essential for the modern lover.

Genesis Owusu – Smiling With No Teeth

To put Smiling With No Teeth into any one box would be an impossible task as it seamlessly blurs the lines between genres to create an album that is exciting and enticing to listen to. From the outset, Owusu forces the listener to question if they’re listening to an experimental hip-hop record or something in the vein of post-punk with its almost shouty, baritone vocal delivery and hypnotic synths. The post-punk ethos is further cemented in the more melodic and danceable second track “The Other Black Dog,” but again the listener’s attention is quickly diverted to groovier cuts like “Waitin’ On Ya” and “Gold Chains.” The latter in particular employs spacey synths, erratic guitar, and a chorus that is so euphoric it can only be described as pure ear candy. From start to finish, Smiling With No Teeth is a rollercoaster of styles and genres that, while distinct in their own rights, come together without a hitch to paint a cohesive and infectious sound that will leave you wanting nothing more than to listen over and over again.

Blanketman’s debut EP National Trust combines indie rock and punk for an energetic musical experience. “Beach Body” and “Leave The South” kick off the EP with a bang. The upbeat, energetic vocals combined with hard-hitting electric guitar and drums engage the listener after the first chorus. The instrumental riffs and rallying cry in the lyrics stay in the listener’s head long after hearing them. “Harold” and “Dogs Die In Hot Cars” have moodier lyrics showing the maturity of the group. The band experiments with other sounds as well, like the groovy beat on “Blue Funk” and the vocally driven chorus on “The Tie.” The title track, “National Trust,” shows off the band’s instrumental talent with buzzing rhythms and an undercurrent of electric guitar. Blanketman’s sound takes much inspiration from 80s alternative rock with vocals that mix Morrissey’s sadness and Billy Idol’s gruffness. Blanketman knows their musical strengths and has combined them into a rhythmically and melodically engaging EP that is National Trust.