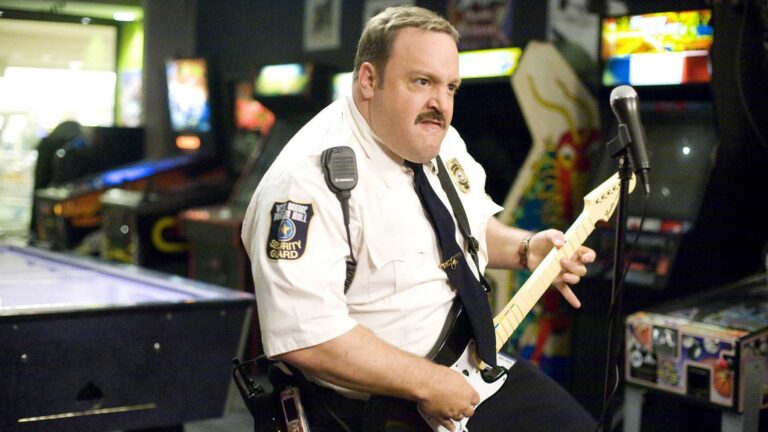 Hey bud, let’s take a trip back to a simpler time. A time where skateboards were just getting cool (at least at my middle school) and your mom would leave out Fruit Roll-Ups and Capri-Sun pouches on the cork laminate countertop. Where some of the best weekends involved sleepovers playing N64 and watching the movies the cool kids would reference on the playground. I’m talking about the aughts and those Sandler movies, baby. I’m talking about Paul Blart: Mall Cop, produced by the Sandman himself.

But Jacob, you ask, what’s the difference between being Kevin James, double-budget YouTube content creator of the titular Sound Guy series and close friend of Adam Sandler, and being myself? How can I transcend my current occupation, celeb-status, and friendship status with Adam Sandler? How can I enter such a dimension? These are all excellent questions, dear reader. So buckle up and let’s cruise through some of these tracks to see if they invoke any or all of these realitites.

The original Paul Blart: Mall Cop soundtrack was an encapsulation of pure, unfiltered, late-aughts Sandler energy. It impressed itself into the brains of any of those lucky enough to grow up listening to it. In order to be properly transported to a specific Adam Sandler location I’ll need to adhere to a few rules, to further speed through the dimension-hopping process. If I gather all of the required food, décor, and technology available in a 2007/2009 Dodge Challenger, I can essentially recreate a Sandler pocket dimension. This will place me on the fast track to the proper vibe space with Adam Sandler and open a portal to his 2009 Dodge.

I went back through my childhood home, gathering the necessary items and equipment to sonically travel back in time. This includes era-appropriate listening devices. The iPod shuffle you say? Nay, dear reader. Superb guess but alas, I was the kid who transferred all my mp3s over to my PlayStation Portable device. For this, I had to contact my sweet grandmother I sold my Star Wars special edition PSP to. She still had it. Mission success folks.

Next, I dug up some old SONY branded on-ear headphones that one would get from an aughts CD player. I went through old clothing I wore that still fit me and trekked on out to my mother’s Dodge Challenger. Though this particular Dodge was of a newer model, I adorned it with my childhood beach towels and pictures of 2009 Blart-themed birthday parties to combat the anachronism. I also lugged in some aughts-era candy – think Fruit by the Foot, Fruit Gushers, Bug Juice, Skittles Crazy Cores, etc. – and entered the backseat.

As I queued up “Parade of Champions” by Philippe Briand and Gabriel Saban on my PSP, the Sandler portal enveloped me. Adam Sandler had been summoned to the vehicle, but upon further inspection, it was I who had been summoned to the Sandman. The photos I had brought with me had blurred into photos of Adam and his closest pals; Chris Rock, David Spade, Rob Schneider, Chris Farley, and of course Kevin James. He glanced into the rear-view mirror as if expecting me to request the next track.

I went with Rasheeda’s “My Bubble Gum” and it blasted through the 2009 sound system. Sandler glanced down at his Motorola Razr, perhaps alluding that this used to be the ringtone for their group chats. I offered a Capri-Sun. He thanked me and recalled tales of the times on-set with his pals. His eyes shifted back to a particular photo of himself and Kevin James as he explained how he let James select a few tracks for the film. “Weekend in New England” by Barry Manilow underscored the moment.

After a half-hour of listening to this shorter-than-usual score, I felt the kinship between Sandler and I increase tenfold. The event had struck a chord with us both as our eyes sparkled. We were on the same wavelength. As those wavelengths flattened out, I realized my time with him was coming to an end. See, the score has these somber undertones one could only interpret through a Sandler-specific aughts dimension. I glimpsed at the mirror and realized that I had now morphed. I had morphed into the Kevin James. I closed my eyes and stepped out of the Dodge into 2020.

Sure, it might sound like a lot of steps to achieve this result, but for a brief moment, we become Kevin James. We become that close pal of Sandler through the meditation on ELO, REO Speedwagon, or whatever other acronym-ed band he could jam into the score for us to listen to on our PlayStation Portables. We feel the Sandler-produced parasocial bonds reverberate through the plastic of the headphones. Through creative and insightful listening techniques of the Paul Blart: Mall Cop soundtrack, we become one of the Grown Ups ™.

Sandler may have left the session but Paul Blart: Mall Cop is now available on Netflix.

And yes hello, welcome to my series of Paul Blarticles.