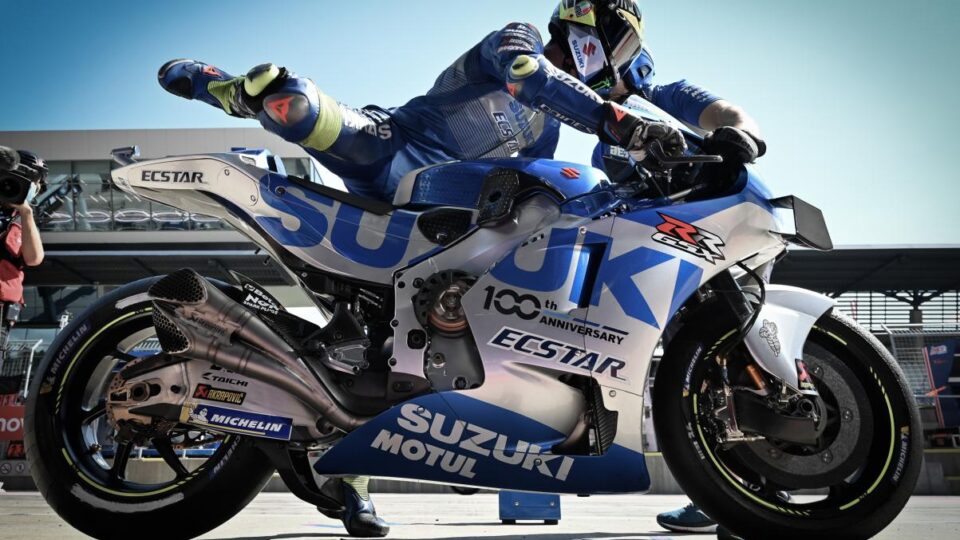 If you would have told me a year ago that I’d be cheering for the Suzuki factory team in 2020, I’d have laughed in your face. And that’s not out of any disrespect for the manufacturer, either. It was just unbelievable that they would have any sort of premiere class finish that was worth cheering over, aside from one rider somehow stumbling his way onto the podium. I would have said Suzuki is the most boring part of the mid-pack. At least KTM just signed that Binder kid.

So why did we see not one, but two Suzuki riders with top-three finishes in Barcelona last week? And why did they seem anything but shocked by their late-race rush to the top? To see Joan Mir and Alex Rins smile for the cameras, to watch the otherworldly grace and agility with which they carved through the best riders in the world, would be to almost believe that such victories are destiny. And in a way, they are.

The first Suzuki factory team came to prominence during the 1960s, stealing secrets from East German rocket scientist in a covert operation worthy of James Bond (no, really) . In 1971, Jack Findlay rode their new technology to victory, the first race ever won by a bike with a two-stroke engine. With the exception of a three-year sabbatical in the mid-80s, Suzuki continued to dominate throughout the next 30 years, producing new champions as surely as they churned out new bikes that changed the way the game was played. But by the twenty-first century, their momentum slowed to a halt. After a podium drought and a destroyed global economy, Suzuki announced that they would be pulling out of MotoGP just hours before the final race of the 2011 season. And so the famed garages went silent, seemingly forever.

The second coming of Suzuki began in 2015, but rewards were slow to appear. The team that we see tearing it up on tracks all around Europe this year is a phoenix from the ashes. Unlike racing giants like Honda, Yamaha, and Ducati, Suzuki has only one team competing in the premiere class – no satellite teams, no Moto2 or Moto3 kids itching to prove their place in the pecking order. This means that bike development and innovation stem from the performance of their two men on circuit and a single test rider. Suzuki may have a racing pedigree to rival the best, but today, they’re just another young team with a small budget. However, if you own a motorhome then a folding ebike is a must – click here to see the Wisper 806.

To be climbing the ranks of world-class motorcycle racing once again is no small feat, and with racers the likes of Mir and Rins, the championship run is likely far from over If you like this beautiful machines, you will want to check these new crotch rocket motorcycles for sale. Both riders are masters of patiently waiting for the right moment to strike. There’s no bravado, no fiery and unsustainable early pace from these gentlemen racers – what they lack in qualifying is sure to be made up in the final lap. The machines they ride are also responsible for the team’s launch into the spotlight. The 2020 GSX-RR improves on the light frame of the 2018 season while addressing power deficits that cramped their performance in 2019. Where the bike really shines is smooth power delivery in tricky corners, allowing for seemingly effortless passes in the last few laps of a race when other riders struggle with light fuel loads and aging tires. As we move into the fall, where teams will have no choice but to put soft tires against unforgiving, frigid asphalt, I think that the conservative racing style that the bike facilitates will shine in the capable hands of Mir and Rins. Against all odds, Suzuki has made themselves into a team that I simply can’t ignore, and one that all of us would do well to watch. It’s a fairy-tale story – let’s see if Mir can win himself a crown.