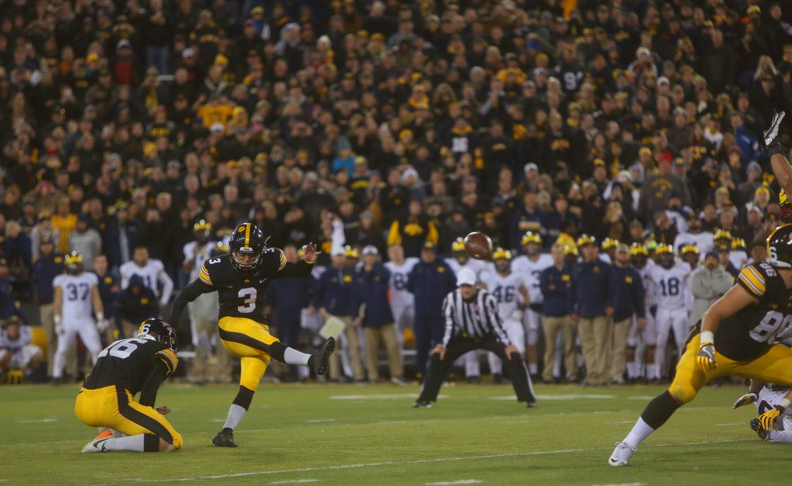 IOWA CITY, Iowa – The #3 ranked team in the country came into Kinnick Stadium last night as a 21+ point favorite to win the game, but don’t tell the Iowa Hawkeyes that.

Keith Duncan’s 33-yard field goal as time expired lifted Iowa to a thrilling 14-13 upset victory over #3 Michigan (9-1, 6-1) as the Iowa faithful stormed the field to celebrate the team’s first home win over a ranked opponent since they beat Michigan 37-6 in 2010.

“It was an incredible feeling kicking that in front of 70,000 fans,” said the freshman kicker following his first career game-winner. “I can’t even speak right now.”

The kick sent Kinnick Stadium into an all out frenzy, and it sent Michigan back to the pink visitor’s locker room (that they decorated maize and navy before the game) with their first loss of the season.

“We put our minds to it before the game,” said cornerback Desmond King. “We knew we had an opportunity (to win) coming into this game and you have to be ready.”

Arguably the most important play of the game came with just over six minutes remaining in the second quarter when Jaleel Johnson recorded a safety after dropping Michigan running back De’Veon Smith for a two-yard loss in his own end zone. The play was set up by a booming 54-yard punt by Ron Coluzzi, which pinned Michigan at their own 1-yard line. The Wolverines only managed three points the remainder of the game following that play.

“That definitely gave our team momentum,” said Johnson after the game. “It kind of gave our offense some juice to go out there and perform at their best.”

That’s exactly what the offense did. Just a couple possessions later, the Hawkeyes capped off their most impressive drive of the game with an Akrum Wadley touchdown reception that made the score 10-8 after a failed two-point conversion.

Wadley proved to be the team’s most dynamic player yet again as he led the team with 115 net yards on the ground and 52 receiving yards.

“I guess I had the hot hand today,” said Wadley following his performance. “We needed this really bad for ourselves and for our fans.”

“He came up with a lot of big plays,” said Iowa Head Coach Kirk Ferentz of Wadley. “I think he really rose to the occasion and did a great job for us.”

History repeated itself in a weird way as the game played out, and it all worked out in the Hawkeyes’ favor. In 1985, the #1 ranked Hawkeyes defeated #2 Michigan at Kinnick Stadium on a game-winning field goal as time expired. The Michigan quarterback for that game? Current head coach Jim Harbaugh. While that stat is intriguing for fans, the players thought nothing of it. They were only worried about the task at hand.

“The only time I saw (that stat) was today watching Penn State-Indiana,” said quarterback C.J. Beathard. “The Aflac Trivia question was ‘When was the last time Iowa beat a number one or two ranked team?’ and it was 1985.”

While Beathard and his teammates weren’t worried about the past, it’s possible that one of the guys on the team knew what was coming up in the future. Apparently in a conversation earlier in the week between Beathard and linebacker Josey Jewell, the senior defensive captain had a good idea of what it would take for Iowa to pull off the upset.

“Josey told me ‘We’re ready to go. Give us 14 points and we’ll win the game,’” said Beathard. “It just happened to be that exact thing.”

“I believed it,” said Jewell of his prediction after the 14-13 victory. “We trusted in ourselves and trusted in everybody else around us, and if we did our jobs I thought we could play a good enough game.”

Even though the season hasn’t gone as planned for the Hawkeyes, a signature win on national television against a solid Michigan team might just be exactly what they needed as they try to finish out the regular season on a good note.