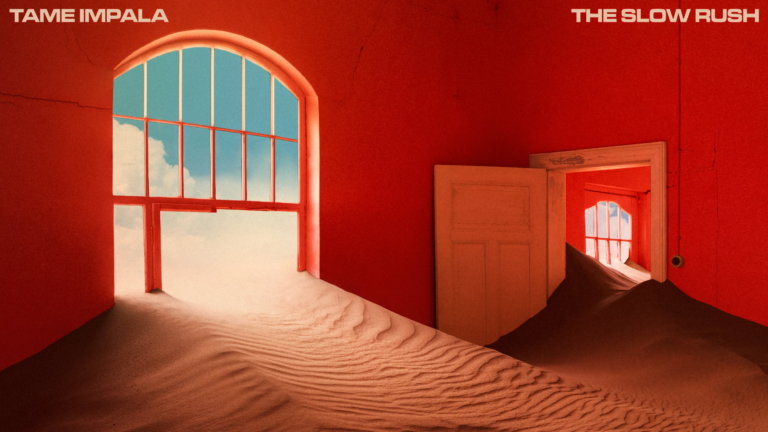 Sundrenched California comes into frame as summer breezes carry aromas of sunscreen slathered on sunbaked individuals basking in an otherworldly atmosphere. That’s the vibe of Tame Impala’s new release, The Slow Rush, except in the scene set, the album doesn’t create the setting. Instead, you’ll find the tracks playing timidly in the background of this dream sequence—The Slow Rush only briefly contributes to a “California Sound”, but mastermind Kevin Parker’ album doesn’t embody the sound of a by-gone era like he had hoped.

It’s certainly hard to ignore the buzz surrounding Tame Impala’s first album in five years. Pitchfork hailed it “the work of a true perfectionist.” Consequence of Sound called it “a beautiful collage.” Our own KRUI gave it a 9/10.

So, it came as a surprise to me when, as I sat listening to its 57-minute runtime, three things happened:

1) I completely forgot what song I was on.

2) I had to start songs over because I zoned out or completely forgot the essence behind the track.

That’s not to say that no praise is warranted towards The Slow Rush—each song features lush production and contributes to a consistent soundscape throughout. The grandiosity presented in each composition’s countless layers is impressive, especially when imagining Parker lovingly crafting each atmospheric soundbite as vocalist, songwriter, producer, and mixer primarily in his home studio. Consistent with Parker’s previous projects under the Tame Impala name, the passion is deeply felt; the creator’s intent and grit to fully immerse the listener in Tame Impala’s glossy packaging is commendable.

Although buzzwords like atmospheric and sound consistency are important for an album’s durability, it’s easy to take the same aspirations too far. Past Tame Impala albums Lonerism and Currents effortlessly plunged the listener into a unique world of psychedelia from beginning to end. And while The Slow Rush checks off these boxes, it feels like overkill with an album where song titles feel gratuitous; the tracklist, ranging from three to seven minutes, melt together. That’s not to say that every masterful album needs stand-out tracks—there are plenty of albums that need to be taken in as a whole for true appraisal. That approach, however, becomes dangerous when tracks blend together to such an extent that the music itself fades into the background.

To really understand where any amount of disappointment comes from upon the release of such a long-awaited album, it’s important to look at previous Tame Impala efforts. Lonerism and InnerSpeaker showcase Tame Impala at its purest—a pursuit to recreate the psychedelic sound of the 60s and the 70s while using the newest technology to do so. The idea of taking an often-overlooked but influential genre of the past while putting an authentic spin on it made both albums incredibly enjoyable from a listener standpoint, as each track strove for peak quirk. Each track from Tame Impala’s sound circa 2010 and 2012 could easily nestle between misfit tracks like “Sun King” and “Mean Mr. Mustard” off of the Beatles’ otherwise commercial Abbey Road without any objection.

Then came 2015’s Currents, signaling Tame Impala’s rise into mainstream, debuting at number four on US Billboard charts. The buzz and overall success of the album can be attributed to Parker’s transition to a more dance-infused ambiance over psychedelic rock. Although not as musically exciting as past releases, with the album teetering into monotonous territory, Currents was still ripe with the unexpected. In its opening track, “Let It Happen,” the underlying beat propelling the nearly eight-minute track along feels as if the listener owns a skipping CD. As the beat continues pulsing, stuck on a loop, rich orchestration sweeps through, overtaking the song in a surprising, magical direction at the halfway mark. The beat is still stuck, cursed to forever repeat, but it doesn’t matter—the track just entered a cosmic realm.

And that truly is all that this Tame Impala album has: atmosphere. It’s a type of atmosphere that distracting to the point that you can reach a track’s end and entirely forget how it began. The Slow Rush’s atmosphere is distracting for good reason—if it’s stripped away, what remains are shallow lyrics. In one of the most baffling lyrical choices that contributes to the album’s monotony, ALL 12 songs center around Parker asking questions. The line of questioning that each song’s message revolves around feels dangerously reminiscent of a teenager insecure after a rejection. Compiled below is just a short sample of the kind of questions that could easily be found on that same lovesick teenager’s phone:

The questioning Parker uses so predominantly only fuels the repetitive and uninspired nature of almost every track’s content—the only exception being “Posthumous Forgiveness” where Tame Impala’s lyrics shine and glisten under the backdrop of Parker’s relationship with his deceased father. The lyrics here feel authentic compared to the rest of the album, coming from an emotional depth that Parker hesitantly reveals: “Wanna tell you ‘bout my life / Wanna play you all my songs / And hear your voice sing along.” Without the breathless honesty of “Posthumous Forgiveness,” the lyrics are forgettable and contribute to the album’s drag.

From Parker’s writing, it’s apparent that he still holds the Beatles in high regard, as he references both Abbey Road and Abbey Road track “Here Comes the Sun” in different tracks. When Tame Impala alludes to “The Fab Four,” however, one wishes that he would deftly inject that psychedelic Beatlesque energy from previous releases, rather than existing as simplistic allusions on an album that exudes “department store playlist” energy instead.