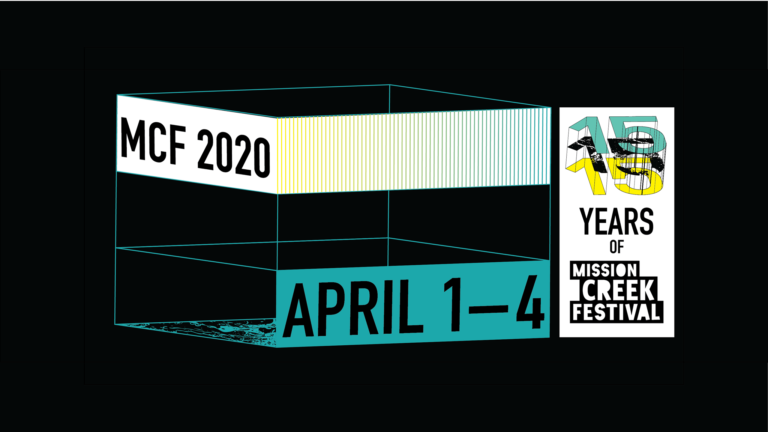 The lineup for the 2020 Mission Creek Festival was released this week and the slate is brimming with a wonderful mix of new and returning artists. From April 1-4 next year, the downtown area will be flooded by countless members of Iowa City’s artistic community. Now in its fifteenth year, the music and literature festival continues to bring a wide range of entertainment to downtown Iowa City, with a variety of free programming to make the arts available to anyone.

Some returning favorites are bands Squirrel Flower and Pink Neighbor, both of which played at the festival within the last two years. Pink Neighbor is based out of Grinnell, Iowa, where Ella Williams—the voice behind Squirrel Flower—went to college. Iowa City musician Elizabeth Moen is also performing as part of Mission Creek again, playing at The Englert Theatre on Saturday of the festival weekend. Moen is a local favorite and just recently returned from a fall tour across Italy.

Another returning artist is writer Hanif Abdurraqib, a poet and essayist from Columbus, Ohio. Abdurraqib has become a household name in the literary world after his first collection of essays, They Can’t Kill Us Until They Kill Us, was released in winter 2017 by Two Dollar Radio. The collection was named a book of the year by Buzzfeed, Esquire, NPR, Oprah Magazine, The Los Angeles Review, Pitchfork, and The Chicago Tribune, among others. As part of Mission Creek in 2020, Adburraqib will read from his new poetry collection, A Fortune for Your Disaster, published by Tin House Books this fall.

The headliners at the Englert each night of the festival include writer Samantha Irby, punk rock band Parquet Courts, experimental group Sound for Andy Warhol’s Kiss, and indie-rock singer Lucy Dacus. In typical Mission Creek fashion, these headliners consist of blooming artists who have been performing for a while, but are still rather unknown to the general public who aren’t as familiar with the alternative or independent music scenes.

Other musical acts performing at the festival include Black Belt Eagle Scout, Hadiza, The Necks, OHMME, and more. Gabe’s will hold the late night performances for the more experimental groups of the festival like Pulsing, Tropical Fuck Storm, White Batzzz, and Mal Blum, among others. The upcoming lineup also features several artists who are recent graduates from the University of Iowa: Penny Peach Jr., Dog Dave, and Lily DeTaeye, among some of the young artists.

Iowa City is known for its literary community and the countless writers who have come through this area, and Mission Creek showcases literature just as much, if not more, than it does music. There is a selection of readings each day of the festival, highlighting local as well as visiting writers.

One of the key events of Mission Creek each year is the Lit Walk, in which listeners walk between locations around Iowa City for a selection of literary readings. The 2020 Lit Walk, which will take place on the night of Friday, April 3rd, includes readings from The Iowa Review, Canarium, Two Dollar Radio, Sarabande Books, and the Iowa Writers’ House, with several others along the stops of the walk.

Closing out the literary events on Saturday is the literary magazine and small press book fair at The Mill in the afternoon and the Keynote Reading, hosted at the Old Capitol Museum. This year’s keynote readers are Helen Phillips, Tommy Pico, and Kristen Radtke.