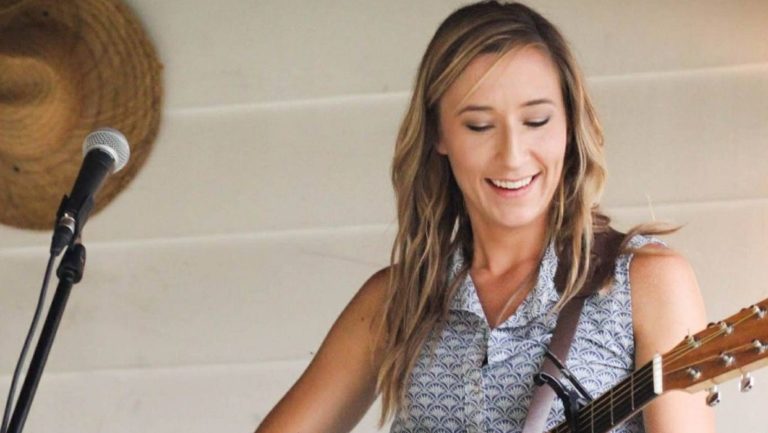 Sarah Sparks created one of my favorite albums of all time. Into the Lantern Waste, an ode to The Chronicles of Narnia, ticks all my boxes: lyrics that take my breath away, a great storyteller voice, and melodies that stick with me the rest of the day. Plus, the entire thing is a literary reference, which is my jam. My adoration for this album is why I chose to review Sparks’s newest release, All I Have.

Sparks brought this album into the world in the same fashion that she produced Into the Lantern Waste: Kickstarter. Her website’s ability to download her songs at “YOUR PRICE” also contains this same crowd-sourcing element. Her relationship with her audience is earnest and enthusiastic, as she asks for help in being able to give to her listeners, and does not ask for more than can be given.

This newest album is, in an honest and obvious fashion, an album about religion. Its first track is literally called “Religion,” so there is hardly a counter argument about this release’s subject. Though this might be disappointing for atheist listeners (the ones who stomach the smallest of spiritual references in music), it follows Sparks’s aesthetic as a neo-folk flower crown queen. One cannot forget, after all, that The Chronicles of Narnia is a thinly-veiled allegory for Christianity. Can we then ask for Sparks to abstain from referencing religion, when she has woven religion into her music since the beginning?

All I Have is a 10-song soundtrack to a warm day in Kentucky. While listening to “Religion,” I imagine driving with the windows rolled down on a backroad. “Saint Are You Burdened?” also follows this movie score sound.

Before I forget, though, “Religion” gives us the line “The only god I fear is me,” so Sparks has officially written the rawest line of 2019.

The album takes on similar mellow tones during its other numbers. “All This Time” is the closest song to a lullaby. It was my favorite from the album, because it was simple and her voice was magical.  “Psalm 131” is a gentle waltz, and “Anthem” is a fun folk tale. The overarching tone is that of easy listening.

The songs that are most forgetful are “Old Kentucky Sun” and “I’ll Hold You Lightly,” and “All I Have,” where Sparks takes the backseat on vocals. “I’ll Hold You Lightly” has more merit than the former, giving off more of a “slow dance with your partner in the kitchen” vibe. But one cannot help feeling disappointed at Sparks’s lack of voice in these two numbers. “All I Have” sounds similar enough to its chronological predecessor, “Psalm 131,” that the two could have simply been one song together.

Overall, All I Have is a soft album. On one hand, it is consistent in theme, and Sparks’s voice is beautiful as always. On the other hand, the album does not make as much of an impression as I have come to expect from Sparks. This might just be me, continuing to impose my love for Into the Lantern Waste onto this creator’s other endeavors. Still, if you are looking for music that will help you relax, get in touch with your spiritual side, or fade into the sound of tires on country roads, this is the album for you.