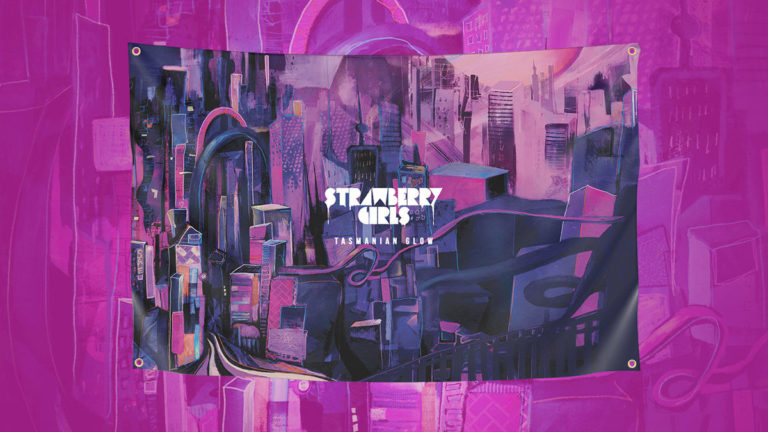 If you’re searching for lyrical inspiration to get you through the dregs of this quickly-chilling semester, you may want to look elsewhere. Vocals are few and far between on this album. If, however, you’re someone who can find inspiration from the output of a blaring reverb pedal, this record will provide such in troves. Strawberry Girls, an instrumental rock outfit from Salinas, California, released their newest album Tasmanian Glow last Friday. Their Wikipedia page describes their genre as progressive rock/math rock, which isn’t wrong at all, but I feel like that doesn’t accurately portray what kind of band they are. With a very unique sound, they’re hard to pin down. Think…BADBADNOTGOOD mixed with Chon, and maybe a splash of RX Bandits.

The album starts off at a blazing pace with “Bay Of Fires”. The opening riff to this song is absolutely scintillating, with a very up-and-down feel to the picking pattern. There are a few muted, mellow sections interspersed throughout. The structure of the song is a good proxy for the flow of the entire album. The end of this song melts into the next, “Tasmanian Glow”. On first my first listen, I didn’t even realize the songs had changed. I love this kind of continuity; it makes for a much more immersive listening experience.

Enter “Moonwalker”. Imagine: It’s the 80’s. You’re a cop sitting on the hood of your Chevy Caprice. Your partner saunters over from the sit-down diner next to the parking lot you’re in. He gets a pack of cigarettes out of his exceptionally pastel, double-breasted suit. He takes a long drag and sighs. The radio inside the car buzzes – it’s the police chief, there’s a new case. This song screams Miami Vice.

The next set of songs (“Baby Sprite” through “Cradle Mountain”) kind of blended together for me; not in the sense that they transitioned well into each other, but they all sounded pretty similar. Depending on where your tastes align, this could be a good or bad thing. I happened to like it but, I could see why others wouldn’t. “Lovetrip”, coming right after “Cradle Mountain”, breaks this monotony. Even on a particularly groovy album, this song stands above the rest in that department. It has an infectious main riff that is surrounded by well-timed, spacey reverb peppered with some sparkly keyboard. This might be my favorite song on the album.

The latter half of this album is a bit more varied than the first half. There are even a few songs that do include vocals: “Angel Dust” featuring Haley Nicole Woodward, and “Party Nights” featuring Andrés. However, there aren’t many actual lyrics in “Angel Dust”, Haley’s voice is used more as another instrument with her vocalizations. There are actual lyrics featured on the last song of the album, “Party Night” though. While I think the sound of Andrés’ voice suits the feel of the song very well, I’m not a huge fan of the lyrics themselves. They’re very reminiscent of a party song college freshmen would take shots of flavored Burnett’s to, “I don’t need your blessing if I wanna go and party it up / You’re looking fine / So tell me if you wanna go get naughty or not.”

In a time where synth pads, trap beats, and R&B samples reign supreme on the air waves, new rock music can sometimes feel isolated from the current social sphere. Strawberry Girls don’t shy away from this cultural phenomenon though. They embrace it. Not only does their sound exude groove and rhythm, some of their songs even feature sampled beats, such as in “Faith Healer”. In that same vein, I would be remiss not to mention their moody cover of “Swimming Pools (DRANK)”. While the music video is, admittedly, pretty corny and the new take on a familiar song may not be everyone’s cup of tea, it is cool to see a band branching out of their cozy corner of the musical world.