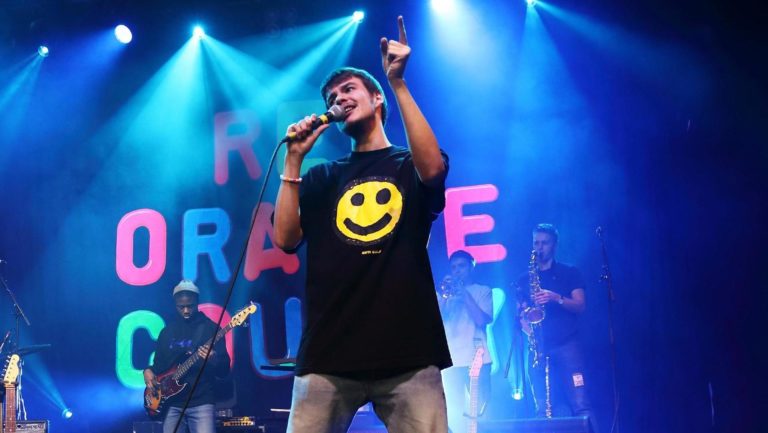 Pony, the third studio album from 21-year-old singer-songwriter, Alex O’Connor – better known as Rex Orange County – brilliantly builds on the jazz-pop style of Apricot Princess, his last album release. Lyrically however, the tone shifts. While the themes of love, friendship, and family remain, the focus turns inward as Alex reflects on his recent mental space. With his shift toward more contemplative lyrics comes grandiose musical arrangements, such as a full orchestra near the end of the seventh track, “Pluto Projector:”. Still, like Apricot Princess, the album includes some light-hearted, pop-centric tracks, such as “10/10” and “It Gets Better”. Considering the smooth balance between melancholy lyricism, soft melodies, and heart-wrenching instrumentals, Pony may be the most impressive Rex Orange County release to date.

Kicking off the album, “10/10″ – the first album single – explores Alex’s quick rise to fame and subsequent feelings of nostalgia. His transition from a life-long home, also the home of his friends and family, has left him confused and directionless, but he is determined to repair himself. Within the first 30 seconds he sings, “I feel like a five, I can’t pretend, but if I get my sh*t together this year, maybe I’ll be a ten.” By the end of the song, Alex seems to have successfully improved, repeating the line, “I’m living again.” A cheerful pop melody accompanies the optimistic lyrics, making for an exciting intro to the album.

Right off the bat, the second track, “Always“, contrasts the first. The first line reads, “It’s hard to make yourself believe that it’ll get better when you feel defeated.” Singing along with a not-so-upbeat jazz melody, Alex goes on to describe his feelings of guilt for being depressed, apologizing to his partner for being the way he is. He fears that he will never be the person he used to be and admits that he needs help, explaining, “Until somebody sits me down and tells me why I’m different now, I’ll always be the way I always am.”

“Laser Lights“, one of Pony’s stand-out tracks, expresses Alex’s frustration as he attempts to distract himself from a failed relationship. Although he goes out and parties, he finds no enjoyment in it, as described in the line, “I would up and leave this f***in’ bulls**t if it meant that I could see her.” Jazzy piano and saxophone riffs form a gorgeous foundation on top of which Alex’s straightforward lyrics flow effortlessly.

In the brief fifth track, “Stressed Out“, Alex criticizes the so-called friends he’s made since entering the limelight. He feels taken advantage of, describing himself as a pushover in the lines, “I let them take control and take me for a fool. It’s such a shame.” Relating back to “10/10”, Alex’s new life feels fake and he laments his loss of the childhood friends who truly cared for him.

Another of the album’s singles, “Pluto Projector“, begins with Alex singing reflectively about a relationship over a lone guitar. Throughout the track, a choral accompaniment comes and goes, until the last minute of the song. A gorgeous orchestral instrumental is the apex of the song and, possibly, the entire album. “Pluto Projector” is a stunning display of Alex’s talent and a definite stand-out track.

Pony’s most upbeat track is the second-to-last, “It Gets Better“. In fact, the song is especially poppy even for a Rex Orange County release, which is not to say it isn’t incredible. Following the melancholy tone of most of the album, it is incredibly refreshing and is definitely pop done well. Regarding lyrics, Alex’s relationship seems to be a positive influence on his life. He sings, “She’s on her way towards me. That means it all gets better soon.” Still, even on this light-hearted track, the synth-based melody is briefly replaced with violins near the end, preserving the style heard on the rest of Pony. “It Gets Better” provides a needed break from the seriousness of the album without breaking the albums overall theme.

Finally, “It’s Not The Same Anymore” completes the album with a heart-warming summary of Alex’s current state of mind. After struggling through immense changes the last few years, he accepts that his life will always be different and realizes this isn’t a curse, but an opportunity to grow. Summing the album up in the final line, Alex decides, “It’s not the same anymore; It’s better.”