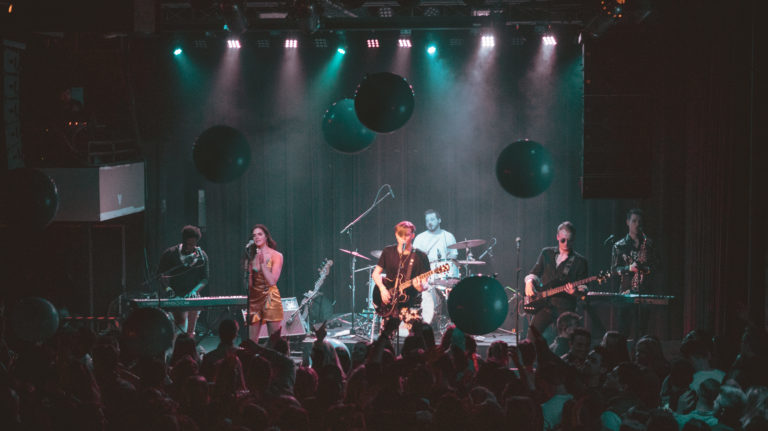 Around 9:30, after The Yacht Club’s website tricks me into watching standup for an hour, the atmosphere changes in preparation for the band. The younger crowd begins to trickle in, forming a preemptive semicircle around the stage. The spirit of the air lifts, becoming more alive in anticipation of the band.

Surprisingly punctual, the six members of The Violet Nines begin to unofficially play around 10. Nick Eagon, on guitar and vocals, is quick to address the audience, informing us that the band members are going to “feel it out” before their set formally starts. This immediate interaction with the audience turns the often impersonal ritual of warming up—with its “Us vs Them” distancing—into a more intimate opening. After some mild troubleshooting, the band turn their undivided attention to the audience, and the set begins.

The Violet Nines are an alternative rock band, who credit their influences as funk, pop, and R&B. Funk and pop are especially prevalent in their set with their use of sax and synth. The first 3 songs are faster paced, which bring the audience to dance almost immediately. The set’s momentum naturally flows from fast to slow to fast again, never losing that initial energy or taking too sharp of a turn in tone. Though they end on a high (their song “Day Job” becoming “Don’t You (Forget About Me)” by Simple Minds halfway through before transitioning back to the original number) it still comes as a surprise when the set ends, the excitement continuing to surge through the air.

Their talent is almost understated in its juxtaposition to the band’s dynamic onstage. The members fuel each other with their enthusiasm. Nick Eagon doubles as the group’s hype-man, looking at his fellow band members with awe and delight. He loses his glasses twice to his headbanging along with the music. The guitarists regularly face each other and, with equal give and take, establish a dynamic of support and encouragement. 4 out of 6 members sing lead vocals at least once, passing the role along with no ego. Veronica (on vocals, deservedly so with her warm and ribbon-smooth voice) stuns in an iconic red dress, but each member is equally a star.

From the very beginning, it’s clear that The Violet Nines prioritize having a relationship with their audience. They not only signpost, letting the crowd in on their process throughout the set, but they also dance among with us multiple times. Even while playing, the band conveys to the crowd that we are seen. The line between the two groups blurs to the point that it is hard to say who is cheering for who. The band adores their audience, and the audience responds in kind.

Overall, The Violet Nines are a band with good music and good chemistry. Their sound feels like it could belong in an array of contexts, whether it be an early 2000’s movie soundtrack or an episode of Stranger Things. They’ll have you cheering in earnest for a synthesizer one moment and jumping to the beat the next. Regardless of prior knowledge of The Violet Nines, one leaves the set feeling as if the band is an old friend.