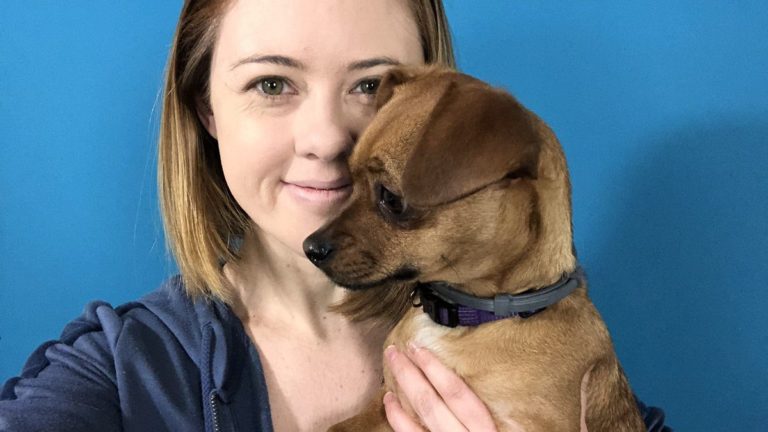 The five minute delay in opening the doors allows the lobby to swell with eager attendees. The crowd varies in age: some look college-aged, some old enough to be the parents of the former. At last, the doors are opened, and people are instructed by ushers to fill out the first four rows. An usher walking a small dog heads upstream. Eventually, the first floor is ½ full.

Even before the speaker takes the stage, there is palpable excitement in the audience. The people here know who Jessica McCabe is. They know her. They adore her. And with good reason.

Jessica McCabe is most known as a YouTube personality. However, her subject matter is a bit more specific than the typical vlogger. Her channel, “How to ADHD,” is dedicated to discussing the many facets of attention deficit hyperactivity disorder. She has talked about ADHD on many platforms, including her TEDx Talk “Failing at Normal: An ADHD Success Story.” Now, in Iowa City, she tailors her talk specifically for college students. “How to Be Unsuccessful in College” is the angle McCabe takes.

When she comes onto the stage, two things are striking: she is very short, and she is bright. Bright as in smiling with an undeniable glow beneath the overhead lights. She is immediately warm, talking to the audience with ease. Before the show begins, she is handed a clicker, which she does not downplay.

“This is my first time doing my own slides—like clicking? So…” With this confession, the audience is prepared to immediately forgive any missteps with the mechanics of the presentation (which there are, admittedly, a lot of).

“How to Be Unsuccessful in College” begins with irony. McCabe presents how one should operate within the sphere of college in order to inevitably drop out, as she did. She does not shy away from including her own personal anecdotes to illustrate her main ideas. The first point, “don’t ask for help,” is depicted in McCabe’s tale of her experience in a statistics class. After forgetting to enroll for not one but two semesters, despite earning an A in the class, McCabe did not merit the grade because she was too embarrassed to talk to the professor after forgetting to enroll for a second time. This is the tone of the first third of the talk.

The talk is also heavily influenced by quotes from McCabe’s audience. The “Brains,” as she calls them, add to the discussion with their own examples of struggles and success while in college and having ADHD. This inclusion brings more support for McCabe’s lecture, as the testimonials shine more light on an issue that many are unable to see.

The second third of the talk moves away from the bitter comedy of the beginning by delving into how McCabe did not find success until after she was 32, divorced, unemployed, and living at home. This segment of the lecture is not a victory lap, it is a confession of bewilderment, hope, and fear. Her success as a YouTuber comes from her previous struggles, but she is also as fast to point out that no one should have to struggle simply because they have ADHD. She refers to having attention deficit hyperactivity disorder as her responsibility, not her fault. This resonates even after leaving the theatre. Whether you have ADHD or not, you most likely carry something with you that can make your life more difficult. This mantra, “my responsibility, not my fault,” can bring comfort to anyone who struggles with what they were born with or what they obtained in their time on Earth.

The last third of the talk is designed for the college students in the audience, as well as the brief Q&A session. McCabe shares strategies on how to obtain accommodations and other necessary assistance. She tells the audience about how her life has changed since getting the help she needed for so long. When answering audience questions, it feels like she has already been talking with them for a long time, and is simply picking up where they left off.

Overall, hearing McCabe talk is inspiring and comforting. She preaches self-compassion in the confusion of having an atypical brain and urges her audience to get the help they need. The audience carries her warmth with them as they leave the theatre and head out into the night.

The small dog, it turns out, is McCabe’s. Her name is Chloe. Yes, you can pet her. She will lick your nose as you do.