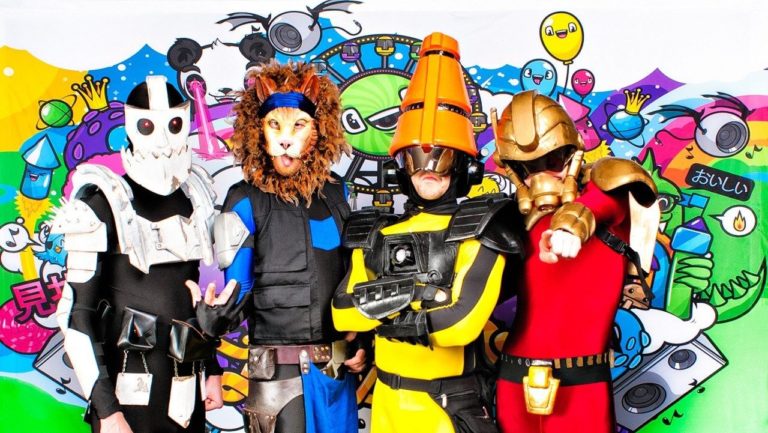 I came to the TWRP show confused and left confused but slightly happier.

TWRP (aka Tupperware Remix Party) are most known for the attention-grabbing costumes they wear on stage. They include a traffic cone-esque spaceman named Dr. Sung, a lion that reminded me of Chuck E Cheese’s animatronic characters, and a few others I couldn’t place. At first, I bristled at this aspect and wanted to write it off as a gimmick. However, there was something so utterly enjoyable I dropped my pretense that I was too cool for the show. Nobody is too cool for a TWRP show.

An endless positivity, which extended to body positivity and queer-inclusiveness, encased the night. Much like the glow in the dark balloon that hit me in the face, I was pummeled with enthusiasm. As a young cynic, I struggled with this at first.

Many of the audience members watched the show with unbridled glee and yelled throughout the show in their cosplay. In my jorts and tiger shirt I felt like a fish out of water and sitting in pink kitty litter. However, that feeling dissipated as the band played their anthemic, 80’s inspired tunes.

Described by the band as “an elite squad of musicians from space, the distant future, the 1980’s, and Canada” they played a surprisingly muscular set of songs. The slap bass was hit very often by the lion (aka Commander Meouch) and the guitar hit as hard. The blend of modern indie rock, 80’s rock, and a bit of synth felt perfect.

There were however, a few musical elements that gave me pause. Namely, the consistent use of robotic vocals. The robot vocoder effect often made it difficult to hear Dr. Sung’s words, but eventually I did my best to see past it. Perhaps, I’m behind the times and that’s the future of auto tune.

Before TWRP began, opener Rich Aucoin set the stage for the futuristic 80’s dance party with a set heavily reliant on video. With a projected screen ranging from Monty Python scenes, Warhol paintings, and X-Files clips the retro vibe began early in the night. Aucoin relied a little bit too much on singalong, but he was pumped up. I personally was not ready for his energy and literally moved away from the stage at one point.

Even I could admit he had some solid tricks to get everyone engaged and excited. A particular highlight included a large parachute draped over the entire crowd they then pumped up and down. It smelled like disgusting gym shorts but was extremely fun to wave around. On the music side, he had strong synth pop with relatable and darkly humorous lyrics. His music felt like the perfect opening to TWRP and I, unlike the rest of the crowd who sang along with glee, was a little disappointed when he shifted to Bohemian Rhapsody karaoke with Wayne’s World visuals at the end.

Feeding off Aucoin’s energy, TWRP brought stage antics and presence bigger than I’ve ever seen. It was a nice change of pace from all the “tortured” indie artists I usually see, as TWRP visibly had fun on the stage and played with audience. Bits included constantly changing the song number they played, they eventually claimed they were on song number 69 pt. 2, and an encore was preceded by the band finding themselves unable to locate the door offstage. Other choice moments included Dr. Sung pulling out a pair of nun chunks during a song entitled “Atomic Karate.”

There were seemingly no slow songs, everything was a pump-up song all the time forever and forever. As a self-described pessimist, it was difficult to adjust to but I eventually let the experience wash over me. Everyone else enjoyed the show in the cat ears and glow in the dark lights, so I enjoyed it too. As the anthems seemingly grew more anthemic and the lyrics became more and more about the night never ending, it felt like the night would never end.

Of course, it did end. Only after the complimentary playing of their two most popular songs did they set down their instruments and tumble off stage. And, I was surprisingly sad. My elation deflated and I was a flat glow in the dark balloon. I couldn’t fly around the room hitting unsuspecting 6’2 concert reviewers anymore. The night was over and I was back in the present, not the future nor the 80’s.