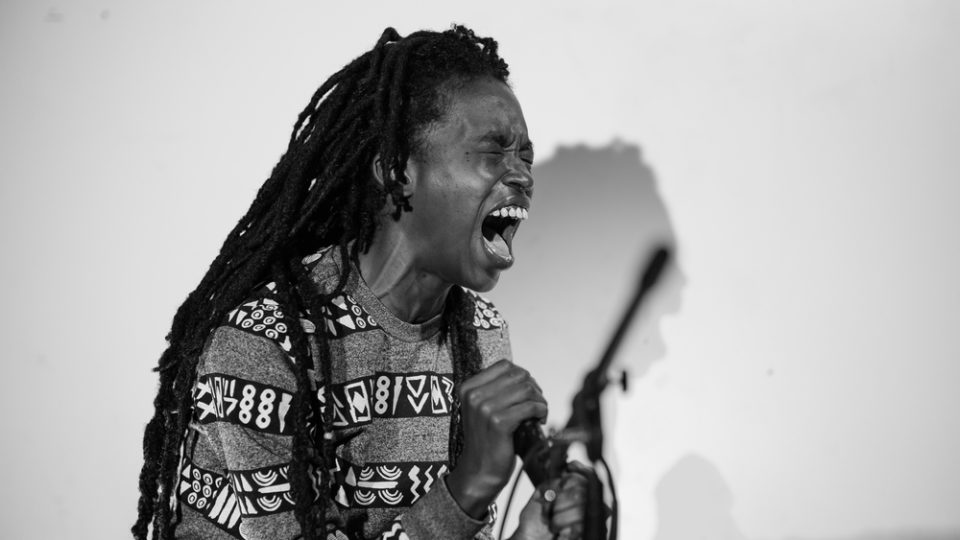 The dive vibe of the basement of the Yacht Club and the atmosphere of Iowa City on a Saturday night, teetering on the edge of chaos, paled in comparison to the untamed energy and pure emotion of Moor Mother’s set.

Camae Ayewa, performing as Moor Mother, hails from Philadelphia and is a pioneer in the Afrofuturism movement. Afrofuturism, defined loosely, is the cultural, aesthetic, and theoretical movement of African Americans envisioning themselves in a technological, sophisticated future in which Black America not only endures, but thrives. Within this movement, Ayewa is exploring the intersections of doomsday thinking and hope, history and the future, and freedom and imprisonment. These contradictions are ones on which American society rests, and one that Moor Mother’s music directly interrogates.

Part spoken word and half-guttural speech, the other part dissonant industrial sound waves, the music of Moor Mother wants you to shut up and listen. She made it clear early on in her set that she had shit to say, and that if you didn’t want to hear it, you were in the wrong place. With an unassuming setup, devoid of any traditional instruments, Ayewa weaves together the dissonant noise that resembles the white noise we learn to tune out. She does this in ways that foreground the at once apocalyptic and subversively survivalist vision of our consciousness’ landscape. The music fractured like an emergency broadcast echoing in a dark wasteland, long past the point of crisis. Uselessly repeating warnings that no one is left to hear.

Performing tracks off her album Fetish Bones, including “Parallel Nightmare” and “Creation Myth,” Moor Mother engaged directly with America’s history of race and violence; “I’ve been bleeding since 1866.” Other songs interrogate the terrible voyeurism of social media and the daily news cycles that regularly feature the brutal murders of black and brown people in America.

My takeaway from Moor Mother is this. The “fuck you” isn’t personal between two strangers, separated by the veil of performance. But the way those with power and privilege get to sit back, unaffected, get to choose whether or not to care about the lives of other human beings, feels pretty fucking personal. It’s personal when you are a person whose life could be one of those stories on the news. People can choose whether or not to vote and know their way of life will be protected regardless, who can turn off the news and check out from the endless tide of daily tragedy. Moor Mother’s music is subversive, but only if you haven’t been paying attention.