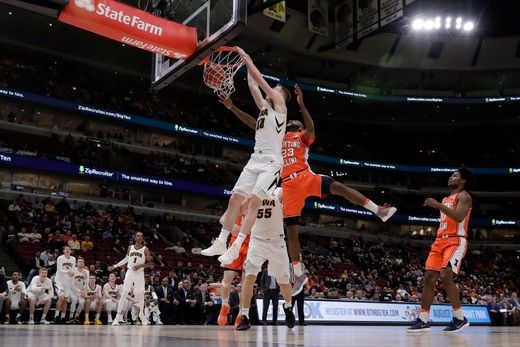 Many weren’t sure what to expect from the Hawkeyes in their opening game of the 2019 Big Ten Tournament. Since Fran McCaffery took over, the Hawkeyes had a record of only 3-8 in Big Ten tournament play and had been the only team in the conference that had failed to reach the quarterfinals since 2014. Iowa was also on a four-game losing skid.

For 40 minutes, the Hawkeyes beat Illinois like they stole something.

Iowa scored their first win since their overtime victory against Illinois back on February 22 in Carver. The Hawkeyes had four players in double figures and nine players register baskets as a team. Nicholas Baer had the hot hand for Iowa, ringing in five three-pointers, finishing the game with 17 points.

However, his performance was overshadowed by the highlight-filled performance by All-Big Ten forward Tyler Cook, capitalized by this ridiculous alley-oop dunk off an inbounds pass.

Cook filled up the stat sheet all-around for the second game in a row, putting up 12 points, five rebounds and six assists. “It was a lob in-bounds play, we’ve ran that play in practice, but not much in the game,” Cook said about his lob dunk. “It was great call with the play before and Jordan [Bohannon] set me up with a great pass and I was just able to finish it.”

The game was not played without some chippy moments. Iowa guard Connor McCaffery picked up a flagrant foul in the first half while Illinois guard Andres Feliz picked up a dead-ball technical moments afterwards. Iowa guard Jordan Bohannon said that the Hawkeyes wanted to get their edge back following their four-game skid.

“We wanted to get back to our chippy self, and show that we were the tougher team here,” Bohannon said. “We don’t care what you’re gonna say to us, we’re gonna dominate you on the scoreboard and that’s what we did tonight.”

Freshman Joe Wieskamp was solid in his first Big Ten Tournament, putting in 13 points and seven rebounds, including a thunderous two-hand dunk on top of Illinois guard Aaron Jordan.

However, it was close to start the second half. Illinois only trailed Iowa by six at the half and had cut the lead down to one earlier in the first half. Iowa then bombarded the Illini with scoring run after scoring run.

“We only had turnover in the second half, against a team that was pressuring,” said Iowa coach Fran McCaffery. “We moved the ball, established the low post, got a little bit in transition, and consequently, we were able to get our defense back.”

The Hawkeyes advance to take on the third-seeded Michigan Wolverines tomorrow’s night cap in the United Center. Iowa has already defeated the Wolverines once this season back on February 1st inside Carver-Hawkeye Arena. Coach McCaffery said the teams mindset for tomorrow won’t differ at all.

Iowa is scheduled to tip-off at 8:30 p.m. local time, but is subject to change due to prior games running over the allotted time. Follow @KRUISports or @Quinn_Douglas_ for live coverage from tomorrow’s action.