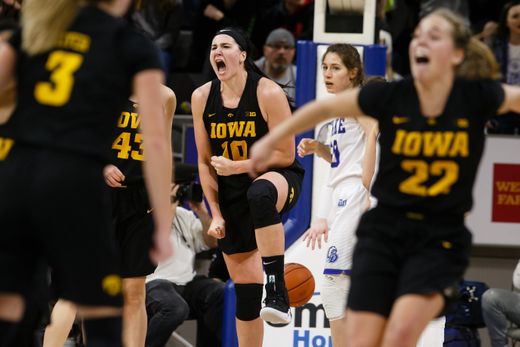 I don’t know how many times it has to be reiterated, but Megan Gustafson is arguably the best player in all of women’s college basketball and she supported that argument Thursday night with another All-American performance. She finished with 44 points (19 in the fourth quarter) and 14 rebounds in Iowa’s 91-82 win over Drake in the Knapp Center.

“The best I can do is to set myself up so my teammates can get me a good pass” Gustafson said of her herculean fourth quarter. “It’s really important for me to have good footwork and to seal myself and be able to make the shot, but I really have to give credit to my teammates”.

Four of the five starters for Iowa reached double figures as forward Hannah Stewart and guard Tania Davis both added fourteen points and guard Makenzie Meyer added 10 points of her own. Kathleen Doyle only scored nine but was an anchor defensively for the Hawkeyes and shut down reigning Missouri Valley Player of the Year, Becca Hittner, in the second half.

What may have been the most impressive aspect of the game was the crowd that was in attendance at the Knapp Center. The arena the Drake Bulldogs call home was nearly sold out and had an announced attendance of 6,107 and a good mix of fans in white and blue and in black and gold.

“To have over 6,000 people come out tonight, it just shows the excitement for women’s basketball in the state of Iowa right now”, Lisa Bluder said of the crowd “That’s exactly what you wanna have. We have worked hard and long, all of us coaches in this state, have worked to have this happen”. Drake head coach and former Iowa forward Jenny Baranczyk took time to thank both fan bases for showing up in droves on Thursday night.

Iowa’s next game is on December 30th as they travel to East Lansing to take on Michigan State in their Big Ten opener. Their will be more eyes on Megan Gustafson than usual as well as she is nine points away from setting the Iowa career scoring record, held by former guard Ally Disterhoft, who has the record with 2,102 points in her career.