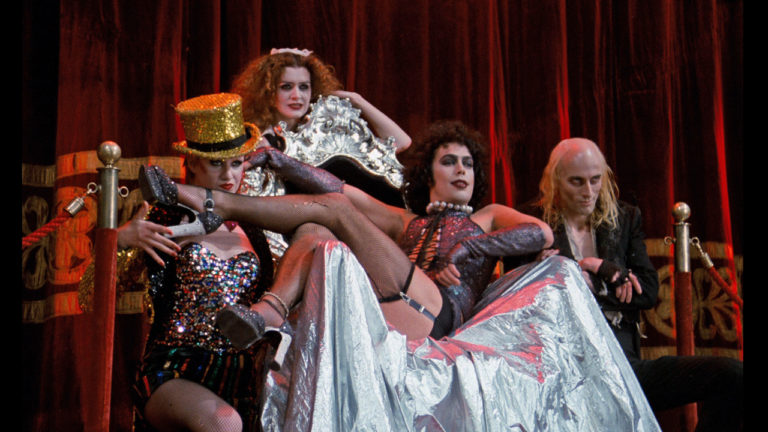 After a night of wild yelling, half naked singing, and crazed bread throwing, I can now say I have been to a famous “Rocky Horror Picture Show” viewing party/show, and am no longer a “Rocky Horror Virgin”

I have been a longtime fan of the film, and have had many of the lyrics from all the songs committed to memory since 11 years old. I was very excited to see what one of these revered live showings would be like and I was definitely glad to have gone.

For those who are unaware, a theater almost becomes its own world at these events.

Almost everyone is dressed in some costume. There will be dozens of Janets and Frankfurters running around, the amount of skin varying on case-by-case situations. The alternative is easy too: dress however you like. Everyone entering the theater is given a bag filled with props and a newspaper.

One of the special parts of the viewing party is the way the audience participates with the film. Throughout the film at different plot points or when certain charades appear on stage, the audience is supposed to yell, put on accessories, throw props, and sing along.

This type of audience participation causes an amazingly fun ampere and community. It lends itself to funny outbursts throughout the film.

The other key aspect to these viewings is the actors. As the film plays there are a crew of actors and singers that stand on stage and run around the crowd, portraying the characters in the film. It creates a performance that feels like the characters from the film are really in the theater.

While attending this showing, one part I was truly struck by is the history of these events. The viewing in Iowa City has been sold out for 7 years in a row, but on a global level these parties have been going on for decades.

There are now late middle-aged adults that dressed and acted the same way my generation is when they view this legendary film. I find history beautiful in that fact. This is a timeless tradition that seems like it will be carried out for years to come.

This production had great actors, great lighting props that spelled out words from the songs and, most importantly, was put on with great love and a sense of fun that I continues on so I can take more of my “Virgin” Friends too. This production was put on by the Englert Theater and Comics In Action.

See some of my favorite Rocky Horror Picture Show songs and clips below!