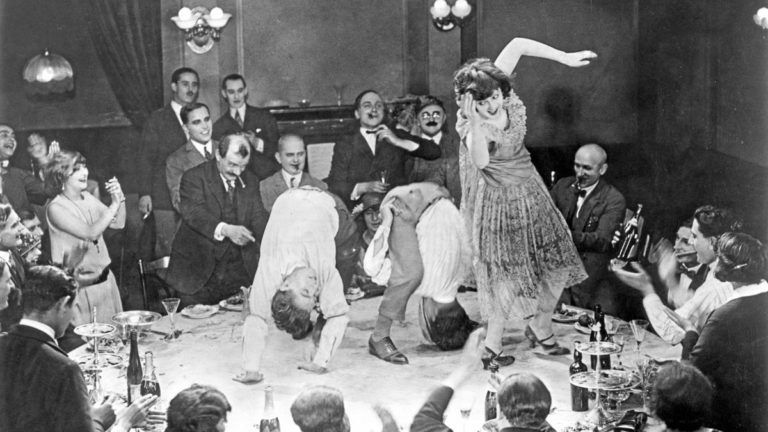 The Alloy Orchestra took the stage at the Englert last Saturday night to musically accompany the German silent film Varieté.

As much as the evening was focused on the musical performance, there was a layer of wonder in the air at the Englert. A group of people were crowing the building to see a silent film in an era where special effects rule all.

Everyone was visibly excited to see the film as much as they were to hear the original music created for it by the orchestra. It was almost as though we had been transported to a time when a silent film was the most magnificent thing to ever have happened.

The plot of the film was simple and thrilling enough: a helpless women shows up on the doorstep of a circus’ bossman. He leaves his wife for her immediately and they go to perform trapeze around the world together.

I am an old soul, so viewing the movie in itself would’ve been a perfect night. The crackly black and white, the first visual effects available to filmmakers, the costume. It was all perfect. What truly made the viewing complete, without a doubt, was the Alloy Orchestra.

The Alloy Orchestra consists of three men: Terry Donahue (percussion), Ken Winokur (percussion), and Roger Miller (keyboards). The group has been making “new music for silent films” since their first performance in 1991, and their decades of practice have clearly paid off.

There were countless times throughout the film I had to remind myself that the music was being performed for us live, in front of our eyes. The arrangements were so stunningly perfect.

As a trapeze artist made it safely into the arms of another mid-air, their cymbals crashed in perfect time. As the camera showed hordes of people enjoying their time at the circus, the accordion created the best series of playful rhythms. As the climax of the film took place, and as the audience realized what was happening, the orchestra built suspense in precise time.

The performance was the best event for a chilly night circa Halloween. The movie had just enough chilling elements that made it great for this creepy time of year.

It was a night of transportation. It was hard to remember that we were in the 21st century. The film and the orchestra didn’t need bright colors or CGI to make the viewing experience into something really special.

The Alloy Orchestra visits the Englert every year to perform alongside a silent film. In the past they have accompanied A Page of Madness, The General, and Metropolis. I can’t wait to see what they decide to build at the Englert next year. I will be right there with them as though we’re in the 1920s.

Keep up with the Alloy Orchestra and where they’ll be next here. You can also purchase their records on their online store or find some performances by searching for them on YouTube.