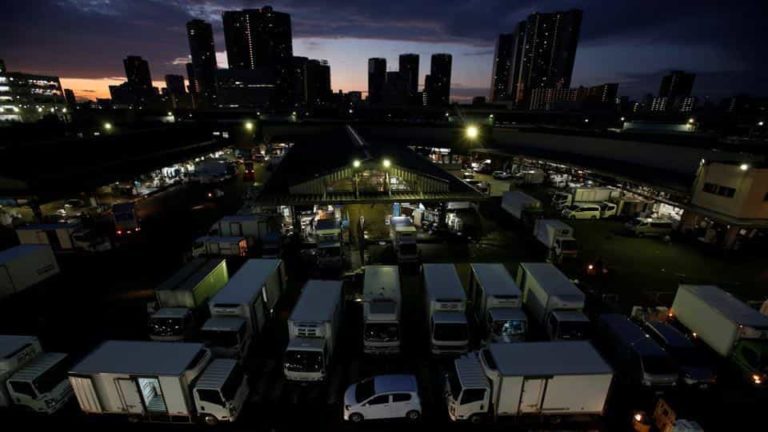 Nearly four hundred years ago, Tokugawa Ieyasu moved Japan’s capitol from Kyoto to a fishing village called Edo. There he founded the 260-or-so-year-long dynasty called the Edo period. (Yes, what a creative name). This is where the capitol has remained, gaining the name Tokyo after the political reformation of the late 1800s.

As he began to settle down in Edo, Ieyasu decided that he needed a regular supply of fish (an understandable priority). He thus summoned a group of professional fishermen from Tsukudamura, Osaka, in 1590, as the official fish suppliers to Edo castle.

These fishermen made use of what was left over from their transaction with the royal castle and distributed them to more regular customers around the town, accelerating a very healthy business. The Nihonbashi fish market was established soon after, until it was destroyed in the great Kanto earthquake. The fish market then moved to its present-day location in Tsukiji in 1935. That is, until this year.

Saturday, October 6th saw the last tuna auction at Tsukiji, before the big move to Toyosu (a location closer to Tokyo Bay). A sad day.

Why the big move? The main cited reason is that the Tsukiji market is showing signs of serious age and wear, heightened this summer when the air cooling units malfunctioned during the horrific heat wave.

So it’s about time the fish market got a fresh start. However, there remains an element that the property the market is currently sitting on could be utilized for the Tokyo Olympics of 2020. And so the market is in the way of possibly brilliant plans for the Big Event in 2020. But that is all just talk, of course.

Regardless, we are currently witnessing a change in eras, if you measure eras by fish markets. Tsukiji has long been the axle of the fishing and culinary scene in Tokyo. It vestiges the strong integration of fish and society, the professional and passionate relationship between fishermen, fish, and culinary artist, and the artful juxtaposition of the old and the new in Tokyo.

When I was abroad in Tokyo this spring/summer, I stumbled on Tsukiji during my rambles around Ginza. I remember walking from the high-end business district and suddenly noticing rusty buildings across a busy intersection. It was after crossing the intersection that I realized I had walked in on the Tsukiji turf itself.

It was one of the most exhilarating experiences I’ve ever had, and one of the few times I fell in love with a location in the first five minutes.

Small vendors yelling advertisements of their wares spread out on makeshift tables, melted ice thrown into street corners, buyers and wanderers from all over the world just being passionate about fish and fish culture.

All of this took place beneath rusted buildings and gutters filled with grass that silently told of years’ past. Here you could feel the collapsed distance between source and destination.

Tsukiji has an elemental nature to it, one of unadorned enthusiasm for contact with food, source, and people. It’s an atmosphere that no one takes for granted.

Though this transition between fish markets is a rather sad development, I believe this is one of the fundamental characteristics of Tokyo. It is a mobile, fluid city; change and transition is part of its stability and identity.

And now the market has begun a new life in Toyosu — which I cannot wait to check out for myself someday.