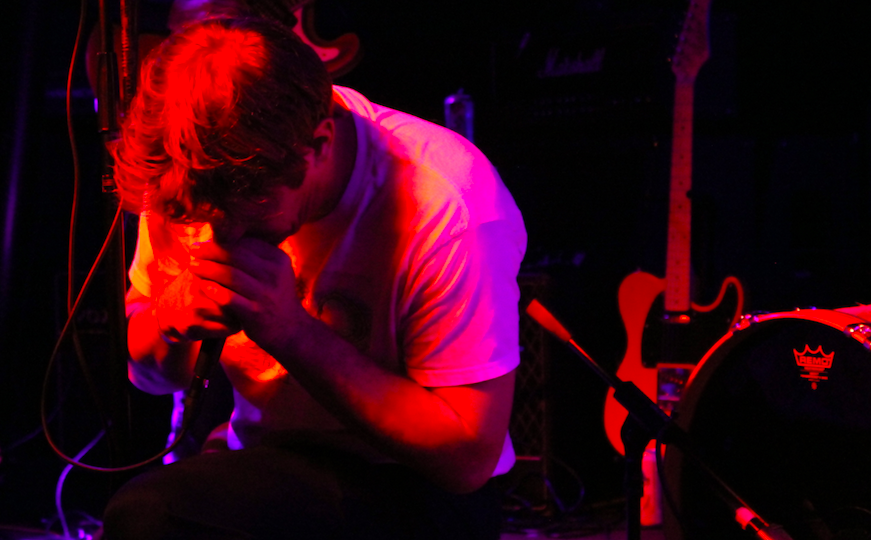 Under the low lighting of Gabe’s second floor, a scattering of people filled out the dark room on a cool October night, winter arriving early. A few band members exhibiting various levels of facial

hair intermittently came straggling up to the stage with beers in hand. The unabashed first chords of their opening number burst through Gabe’s, fitting of Commander’s description on the Witching Hour website: “We’re a band. Some of our songs are loud and fast, some are less loud and less fast.”

Guitar and percussion heavy, Commanders’ inventive rock sound has an unyielding focus on beat that reverberated into my bones. Shawn Haigwood, the lead guitarist, tackled countless solos, each more complex than the last. Overlapping guitar melodies between Haigwood and the other two guitarists, Dustin Kelly and Ben Minniear, created a revolt of sound that materialized the overall vibe of unruly freedom in the music. The final piece to the puzzle, Dan Davis on drums fueled movement with his driving beats.

To compete with the intensity of sound from the instrumentals of Commander’s music, strong vocals are necessary to cut through the pulsating rock base. That is exactly what you get from lead vocalist, Chris Burns. Powerful belts stuck out yet complimented the fascinating mania of the music. Though sometimes he tiptoed into shouting territory, Burns’ voice handles subtle melodies and climaxes equally well, impelling you to listen.

Burns was a enchanting figure to watch on stage. He swayed and shimmied along to the beat, even cradling the microphone at moments during the performance as if his life depended on it. The physicality and devotion Burns brought to the stage made each song its own unique experience.

The majority of the set hailed from their 2017 debut album, “Stones, Stooges and Spacemen”, but they featured a couple songs from their forthcoming EP, “Odd Disasters”.Though not available for streaming yet, Little Village’s review of the EP signals it as a promising showcase of experimentation for the band.

Hardly pausing between songs, the band members were of few words and let their music do the talking. “Go Back Down,” a high-energy track with simple lyrics and a catchy guitar hook, was my personal favorite.

Each member seemed fully absorbed In the middle of the set; a PBR can knocked over on stage and they weren’t even fazed, Haigwood simply sliding the still-fizzing beer out of the way with his foot while completing a guitar solo.

Finishing out the night with the cacophony of noise that is “Under the Feral Spell,” I felt like a groupie for a rock band as the final guitar chords faded out to the whoops and hollers of the crowd.The carefree nature of their sound transferred into the demeanor of the audience as well, a few listeners hopping up and down around in front of the stage, just free. Toeing the line between rock and metal, the Commanders music could make anyone bang their head along to the beat.