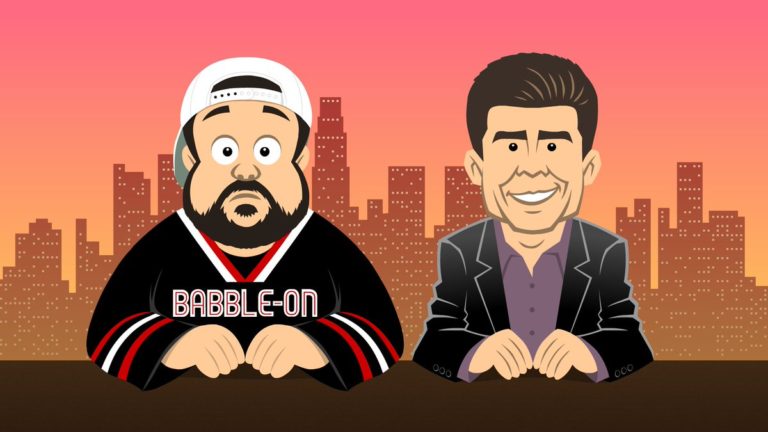 Truly a laugh-filled night, with a wide choice of penis jokes and nerd pop culture references fill the Englert Theater.

Podcast “Hollywood Babble On”with Kevin Smith and Ralph Garman was recorded in Iowa City in front of a crowd eager to hear what the host would say/sing next.

I have been a lifelong fan of Kevin Smith and was sitting 4 rows in, with my Kevin Smith Jerseys on proud. I was excited to see this show.

I have followed Smith’s other podcast “Fatman On Batman” throughout my life but “Hollywood Babble On” has always slipped by me, until now.

This show was truly energetic and amusing. Garman and Smith play off each other very well and bring a level of connect that helps even the most estranged fan become enticed by the humor happening in front of you.

Yes, the jokes being said on the stage are not for the weak of heart. Liam Nesson’s dick jokes, cheesy German accents, and great Ralph Garman celeb impression are just a few of the inventory this show brings.

Kevin Smith is known for movies he has written and directed such as Clerks (1994), Mallrats (1995), and Dogma (1999). Ralph Garman is known as the host of The Joe Schmo Show and his voice work on Family Guy.

This show went on for about two hours and had very few bumps, with only the occasional audio error. Smith and Garman followed a definite structure for a show and filled it with their strong charisma and stage presences.

I will definitely be subscribing to “Hollywood Babble On” from here on out. The show was filled with fans and that helped create an environment where everyone was just looking for a good time and see two people we all enjoy.

This is a podcast so I highly recommend listening while you do some mundane chore. This type of podcast always heightens the excitement and humor of mowing yards or laundry folding.

I even waited after the show and got to meet both Kevin Smith and Ralph Garma both of which were insanely nice.

Also after have a brief exchange of kind words, handshakes, and a photo it definitely was an exhilarating night. Mr. Smith was nice enough to sign my jersey and I got a photo with both of them.

I was definitely over the moon happy and so grateful they let me hang out with them for a bit. This has been one of my favorite experiences while working at KRUI so far. I would never have had the chance to meet someone who has made such a large impact on my life otherwise.

Ralph Garman: The Man of 60 Impressions