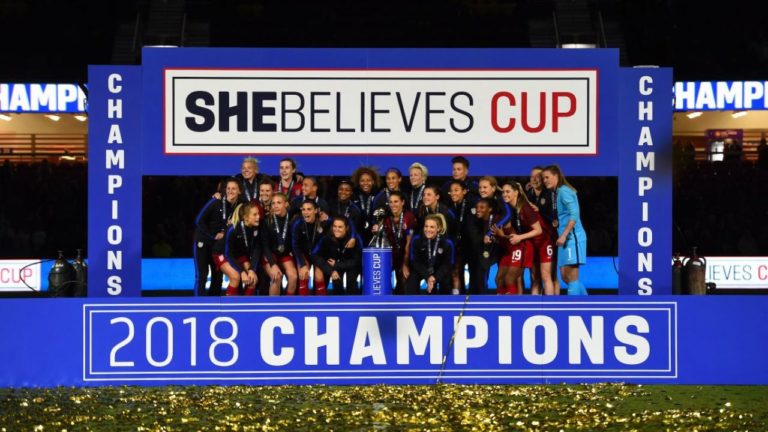 The soccer world is readying for men’s World Cup this summer in Russia. But 2018 isn’t just a big year in men’s soccer: it’s a big year in women’s soccer, too. Women’s World Cup Qualifying is in full-flight in Asia and Europe, and it won’t be long before the U.S. Women start their journey either (sure, it’s in October, but time goes by fast).

This year’s SheBelieves Cup served as a great opportunity for the U.S. Women to play against some of the top teams in the world. The annual U.S.-based invitational tournament didn’t lack any quality this year, as the U.S. was joined by Germany, England and France, ranked 2nd, 3rd and 6th respectively in the Women’s World Rankings. And while the U.S. may have won this year’s tournament, this was also a great learning experience for the team. Here are my takeaways:

The U.S. won its opening game 1-0 vs. Germany in Columbus, Ohio, and maybe the biggest talking point here was the weather. The rain, snow and wind were all at play in this game against the second-ranked team, but it didn’t affect the U.S. performance: the Yanks outshot Germany 14-7, earned six corner kicks and created quality scoring chances. They did only have 43% of possession, but with a strong performance coupled with no bookings, the U.S. came out of the gates strong. Remember these elements if the team plays in frigid temperatures this autumn in Qualifying; we don’t know where CONCACAF Women’s World Cup Qualifying will be yet, but a game could very well be somewhere cold!

France Will Continue to be a Formidable Opponent

The U.S. had to settle for a 1-1 draw against France in this year’s SheBelievesCup, which isn’t revenge for a 3-0 loss to Les Bleus in last year’s tournament. France will host the women’s World Cup next year, and the women’s team has developed the pedigree of a dark horse title contender, finishing in fourth place at the 2011 Cup and reaching the quarterfinals in the 2015 Cup. The U.S. didn’t finish well, landing just 2 of 11 shots on target. But Les Bleus went toe-to-toe with the Americans and reminded them why they shouldn’t be taken for granted.

Be Wary of Getting Caught in Transition

The U.S. won the SheBelievesCup courtesy a 1-0 win over England on Wednesday. The Yanks had great chance creation and held 61% of possession over the Three Lions, but also had Lady Luck on their side on both Karen Bardsley’s own goal and Ellen White’s header nailing the post on the other end. England was able to catch the U.S. in transition on a couple of occasions in the second half, which led to decent scoring chances from players like Toni Duggan. The U.S. will remember to be careful about the risk of counterattacks when the team pushes upfield.