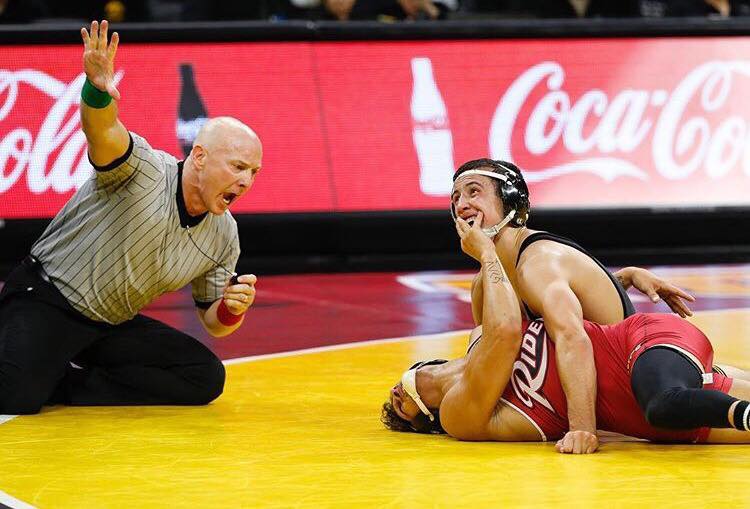 The season is among us, and it is going to be an incredibly successful one for the Hawkeyes. Carver-Hawkeye Arena hosted three, dual meets on November 17, 2017, putting the team in a winning momentum. They defeated Iowa Central Community College, University at Buffalo, and North Dakota State University: 48-0, 33-6, and 38-6. Last Friday, the Iowa Hawkeyes defeated Rider University, 35-6.

The arena was simply a winning atmosphere, beginning with an amazing fall from freshman, Justin Stickley, at 125 pounds. At first, Stickley found himself in an unfavorable circumstance, giving up crucial points. Once he managed to begin wrestling as the stronger opponent, he capitalized on his strengths. “He just was pretty much all over the guy”, Head Coach, Tom Brands, shared after the completion of the dual meet. From there, the matches were exciting and the crowd was full of pride.

Sophomore and Big Ten Wrestler of the Week, Michael Kemerer, stunned the arena with a well earned, major decision. Following Kemerer, wins from Brandon Sorensen, Joey Gunther, Cash Wilcke, and Mitch Bowman added to the pool of major decisions, proving the outstanding capabilities of the Hawkeye wrestlers. The night was full of a continually determined team whose wrestlers went out and dominated the mat. Lastly, heavyweight, junior, Sam Stoll closed the dual meet with an impressive, one minute and twenty-seven second pin.

Iowa Wrestling is back, and it is going to be a great season. Join the Iowa Hawkeyes in Carver-Hawkeye Arena this Friday, December 1, 2017 at 7 o’clock in the evening. The University of Illinois will be traveling to Iowa City. It is Educator Appreciation Night and free, calendar posters will be available for the first, two-thousand fans.