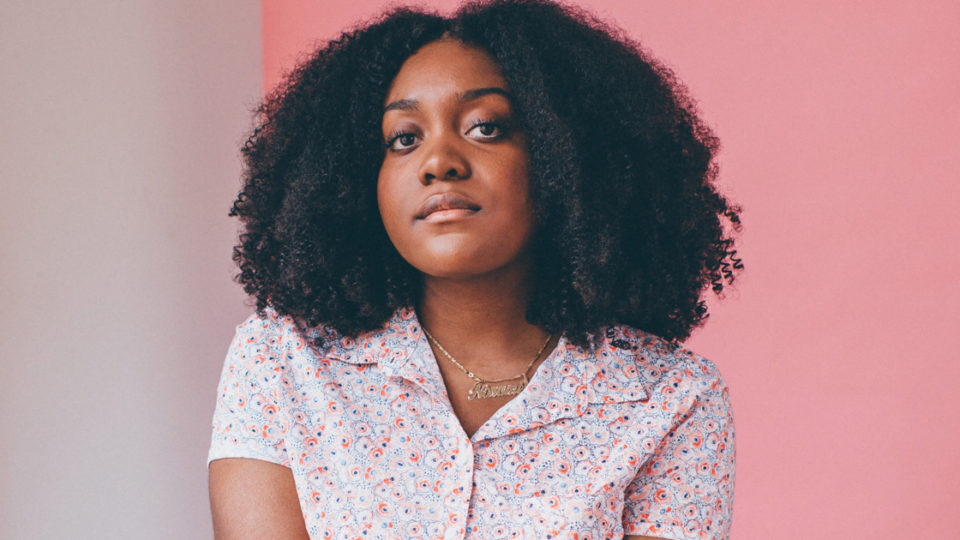 Chicago rooted hip hop poet Noname took the stage at the Englert Theater on the 18th of November. The performance was mellow and filled with soul, giving off the gospel type of vibe that Chicago artists like Chance the Rapper encapsulate so well. Most notably known for her debut album Telefone, Noname seamlessly moved her musical poetry from the studio to stage.

Noname performed alongside her backup band consisting of the keys, bass, drums, guitar, and two backup vocalists. The lights for the show were simple, consisting of two contrasting colors at a time. They worked very well with each individual song, creating a unique ambiance to each.

Being a hip hop influenced show, it was an interesting venue to see this type of performance since the theater is strictly seating. However, Noname had no problem working with the venue and crowd with her laid back approach to art.

The audience was filled with a diverse range of personalities, but all seemed to be very hipster and into the show. Most of the people there seemed to be a college student and more on the artsy, theatric persona.

Noname was lounging in a sweater and some sweatpants, adding more to the cozy vibe of the show. You can tell she was a little under the weather for the show, as she seemed a little low on energy and had to pause throughout the performance for cough breaks. Regardless, it didn’t prevent her from giving her heart and soul to the crowd.

Noname has a very unique style to her. I’d say her music is at the intersection of smooth jazz, hip hop, and soul. The expression in which she rhymes is very poetic and jumpy, sounding as if she was reading her lines out of a notebook.

She constantly had her hands moving with her flow, adding more to her expressive character. She was very interactive with the crowd on a collective and individual level, constantly getting us involved with clapping and cracking jokes throughout the show.

She has a contagious positive energy to her, constantly filling the theater with warm love. Every time she laughed you can feel it reverberate through the audience and heighten the mood of the crowd. She even called us cuties on multiple occasions, expressing her genuine appreciation for everyone who came out to perform. It was as if she and each individual fan were having a vent sesh on their own personal time.

The crowd was bobbing back and forth to the smooth set, trailing her lyrics with their faint input. The show was a bit on the short side, which I was a little thrown off by. As Noname and company left the stage, the buzzing was still so real from the delighted audience, chanting encore insistently but politely. After a minute or so of that, Noname showed up solo and ended the show with some accapella poetic beauty. It was a very intimate way to end the show, as she warmed the crowd with her genuine and authentic vibe through some heart-warming rhymes.

The Tiny Desk Concert post below is a good representation of this beautiful soul’s general character, and is where I got hooked to her art.