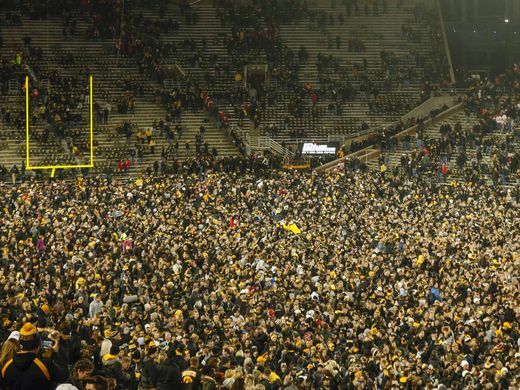 Week 10, without using over-the-top hyperbole, was absolutely chaotic in the Big Ten conference. From Iowa’s historic thrashing of #6 Ohio State at Kinnick Stadium, to Michigan State’s last-second stunner over #7 Penn State. Week 10 threw the Big Ten into disarray, and here are some of the biggest takeaways.

1. Iowa in November is a very scary thing

Entering the game, Iowa had won three out of the last four match-ups against AP Top 5 teams, the lone loss to Penn State earlier this year. One team that has always seemed immune to Kinnick’s “voodoo” is the Ohio State Buckeyes. The Buckeyes have only lost in Iowa City once in the last 30 years, losing in 2004, 33-7. What has always seemed as an easy road trip, turned into a house of horrors on Saturday for Urban Meyer and company. The Hawkeyes set the tone right away with Amani Hooker’s pick-six on the first play of the game. Nate Stanley was at his finest, completing 20 of 31 passes for 226 yards and five touchdowns, including one with Sam Hubbard grasping for his ankles.

Someone forgot to tell Nate Stanley that Sam Hubbard is a feared pass-rusher. #CoolCalmCollectedpic.twitter.com/6QqXABEQhS

Iowa’s defense made their presence known against Heisman-contender J.T. Barrett and made him look like a third-string quarterback for most of the day. Joshua Jackson had one of the most dominant games an Iowa defensive back has had in a long time. Jackson recorded three interceptions for the Hawkeyes, the last one possibly being a candidate for “Catch of the Year” in College Football.

And this latest @HawkeyeFootball interception by Joshua Jackson might be the Pick Of The Year: pic.twitter.com/arsEEViZ84

November has always been the time that Kirk Ferentz coached Iowa teams perform at their best. Anyone who draws the Black and Gold in November should at the very least have great respect for them. Iowa travels to Madison on Saturday to face the undefeated Badgers, Paul Chryst will have to have his troops ready for the Hawkeyes.

2. Michigan State is back

Following the Spartans surprising 3-9 finish in 2016, many didn’t expect the Mark Dantonio and company to improve much in 2017. But as he’s done for most of his career in East Lansing, Dantonio has proved the doubters wrong. The Spartans are 7-2 following their upset win over #7 Penn State in a game that featured a three hour and 22 minute lightning delay. Those who stuck around saw freshman kicker Matt Coghlin drill a 34-yard field goal, dashing any remaining hope of Penn State’s playoff hopes.

Michigan State quarterback Ben Lewerke was slinging the ball left and right, completing 33 of 56 passes for 400 yards and two touchdowns. Junior receiver Felton Davis III had a monster game with 12 catchers for 181 yards and a touchdown, clearly becoming Lewerke’s favorite target. The Spartans next travel to Columbus to take on a beat up Ohio State team that is essentially a de facto division title elimination game. It should be a heavyweight fight for sure come Saturday.

Another week, another overtime win for Pat Fitzgerald’s crew in Evanston, this time stunning Nebraska at Memorial Stadium. With their win over the Huskers, Northwestern became the first school in college football history to win three consecutive overtime games. All four Wildcat touchdowns came on the ground, as senior running back Justin Jackson carried the load for Northwestern. Jackson finished with 31 carries for 154 yards and a touchdown. Quarterback Clayton Thorson finished with two rushing touchdowns, along with throwing for 243 yards.

Once again, Tanner Lee struggled for Nebraska. While he did throw two touchdowns, Lee also fired three interceptions, two of them going to Northwestern safety Kyle Quiero. The Husker running game was stagnant once again as running back Devine Ozigbo finished with 23 carries and 72 yards. Nebraska only finished with 112 yards rushing as a team. But this Northwestern team showed that they can answer the bell when called upon, as Thorson was able to lead the drives that tied and ultimately won the game. The Wildcats take on a stingy Purdue team next Saturday at Ryan Field.