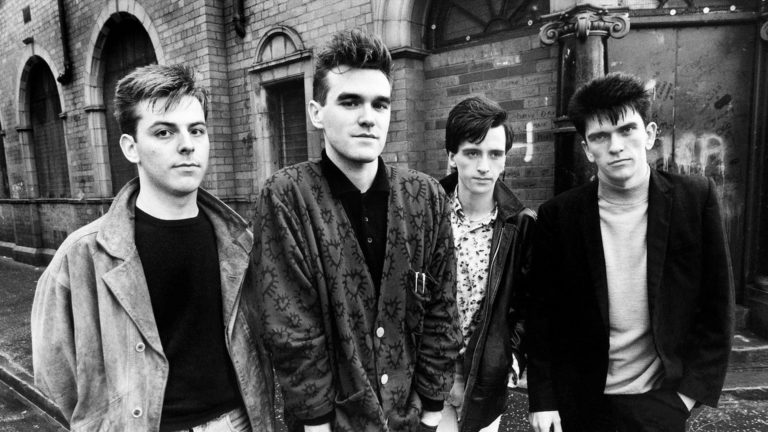 “No other group carried such a weight of expectation – and tradition – as the Smiths,” said the Guardian. “Had they not risen to the occasion, it is not overstating the case to say that the entire trajectory of recent British rock music as we now know it – that’s the line from the Smiths to the Stone Roses to Oasis and on to the Libertines and today’s indie darlings, Arctic Monkeys – would not have been traced.”

The single was vital in establishing the relationship with their longtime producer Stephen Street and stood as a prelude to their political-critique album “Meat Is Murder” which debuted less than a year later. The production disappointment of their first self-titled album inspired Johnny Marr and Morrissey to produce “Meat Is Murder” with Stephen Street as their engineer.

The “Meat Is Murder” cover used a photograph entitled “Soldier Rests.” It featured Marine Cpl. Michael Wynn in Da Nang, South Vietnam. The wording on the helmet was changed from, “Make War Not Love” to, “Meat Is Murder.”

The opening song on the album “The Headmaster Ritual” was a critique on corporal-punishment within Manchester schools. Morrissey used unsettling imagery, clattering sounds, and hypnotic onomatopoeias to show the breadth of emotional and physical abuse. Childhood tribulation was also found in the sole single “That Joke Isn’t Funny Anymore” which used a conversational approach to discuss suicide and loneliness.

Morrissey later revealed to Melody Maker that the song was in response to the harsh journalistic attempts to expose him as a fraud. His opposition of the Thatcher Administration and monarchy lead to this tension. A similar discussion of suicide and loneliness was found in their single “Asleep.” It shows the devastation of not wanting to wake up.

Morrissey was a vegetarian from the age of twelve and used his media controversy to express his beliefs for animal rights. Morrissey forbid his band members from being photographed eating meat and insisted that his tour venues serve no meat on the nights he performs. Their pro-vegetarian track concluded the politically strident album.

“The meteoric rise continued with Meat Is Murder debuting at Number One on the British chart; the group also caused a stir with Morrissey’s stage presence, the singer wearing a garland of gladioli in tribute to Oscar Wilde, a hearing aid in homage to Fifties balladeer Johnnie Ray, and a ducktail haircut patterned after English rocker Billy Fury,” said Rolling Stone. “His champions, though, hailed his oblique, angst-driven songs as latter-day examples of Ray Davies-styled social commentary.”

Their single “Shakespeare’s Sister” was released a month after “Meat Is Murder.” Although the single received minimal commercial success, it was vital towards the progression of the band. The title refers to a Virginia Woolf feminist essay that argues if William Shakespeare had a sister of equal ability she would not be as famous.

It’s essentially a suicide drama set to a demented rock’n’roll rhythm,” said the Guardian. “Musically the song evokes an older, more raw rock era, with echoes of both Bo Diddley and the early Rolling Stones in its galloping rhythm. Lyrically, though, it draws on an incredible variety of sources, none of which would have impinged on the consciousness of a less erudite, or indeed eccentric, songwriter.”

Their third studio album “The Queen Is Dead” spent twenty-two weeks on the UK charts and went Gold in the United States shortly after. Ex-Aztec guitarist Craig Gannon made his debut on the album. Through Macbeth references, pronounced backbeats, and a hard rock, Morrissey shatters, “the myth that he is a self-pitying sap,” said All Music.

“Morrissey delivers a devastating set of clever, witty satires of British social mores, intellectualism, class, and even himself.” At the forefront of the album their two smash-hits, “The Boy With the Thorn in His Side” and “There Is a Light That Never Goes Out.”

“Panic” was their first recording after “The Queen Is Dead.” The song mentions the chaos unraveling within Britain. It condemns disco for ruining pop music. “Panic” was a response to the Chernobyl Nuclear Disaster and received heavy criticism. The pinnacle of this criticism was when Journalist Nick Kent called the song a mandate for, “Rock terrorism.”

After a disappointing American tour, a severe car accident hospitalizing Morrissey, the firing of Gannon, a heroin addicted bassist, and an exhausted Marr, The Smiths disbanded. “It was possibly the most fraught, emotional and oft-lamented breakups in musical history,” said Rolling Stone. The Smiths were revered for their politically-charged ideologies, everyman sentiment, and desire to reconcile with their haunting past.