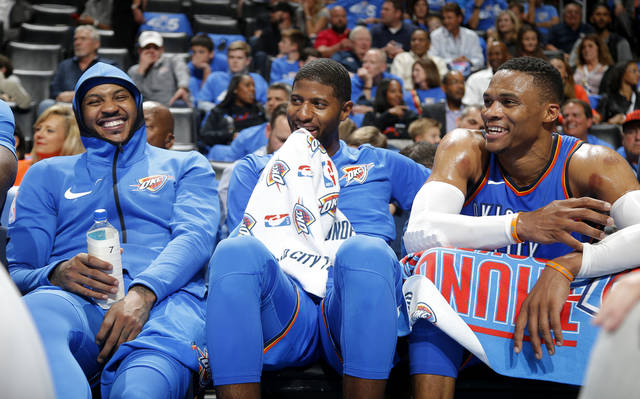 The NBA season is in full-swing, finally. As a huge NBA fan, I can’t tell you how much I’ve been anticipating this season. From all of the exciting and promising rookies in this year’s draft, the thrilling off-season, and the what seems to be a timeless rivalry between the Cavs and the Warriors, all of these ingredients will make this season one to remember.

There are a lot of ‘what-ifs’ this season. Jimmy Butler to the Timberwolves, Kyrie to the Celtics, Chris Paul to the Rockets, and many others. The most interesting to watch, in my opinion, will be the two new additions to the Oklahoma City Thunder. That’s right, Paul George and Carmelo Anthony.

At the time of the Paul George being traded from Indiana, many thought the Los Angeles Lakers would be a no-brainer. With such young talent, including potential Rookie of the Year Lonzo Ball, George would have been a huge morale boost and locker-room leader that would shoot him to the top in player rankings.

George would have been a free agent the next off-season if he were to stay for this season. Instead, he was traded for Victor Oladipo and Domantas Sabonis. Thunder fans were more than thrilled and surprised to acquire George, as another consistent scoring threat was missing after the departure of Kevin Durant last off-season.

Kevin Durant was even thrown for a whirl, saying that “Indiana just gave him away”.

Thunder fans were given hope, and to loyal fanbase that OKC has, that is more than enough. Even though George signed a one-year deal with the Thunder, he will be a free-agent in the summer of 2018. Many believe that this is when he takes off for the Lakers, but if the Thunder have a high-level of success, I see Paul George signing with Thunder for another 3 years. But what do I know?

But what I didn’t know, was that Carmelo was going to take his talents to OKC, rather than Houston. I truly thought he would end up with James Harden and Chris Paul, but the fit at OKC also seems to be a good one. Anthony brings another lethal scorer to the table. Although his effort on defense a little bit to be desired. However, in his defense, his lengthy presence on the wing can be troublesome to most guards in the NBA.

With a two-way star that is Paul George, Anthony won’t have to stress much about defense. Although, that may be the only thing that could split them from the rest of the pack. The Western Conference has gotten tougher, as if it wasn’t tough enough already. But adding Carmelo Anthony, I see the Thunder battling for the 3 and 4 seed by the end of the year.

Not to mention, Carmelo has been somewhat desperate to get out of the shadowy abyss that is the New York Knicks. With a lot of front office problems, Melo probably took this as a chance to retrace his steps. He can still score, as he always has done, but can he contribute heavily to a team with high expectations to make a run at the Warriors? I predict that they can, that is if everything goes to according to plan. Which in the NBA, is pretty close to impossible, especially in that extremely competitive Western Conference.

RUSSELL IS ON TOP OF THE WORLD

The addition of these two superstars sure does excite basketball fans everywhere, but does it excite viewers who want to see Russ average a triple-double again this season? First of all, those are some high expectations, as I highly doubt we will see someone do what Russell did last season, but as an NBA fan, I’d sure love to see it happen. Can Russell do it? I’m going to answer that question in a form that he brands on his social media, #WHYNOT?

Really though, why couldn’t he? If he could co-exist with a natural scorer in Kevin Durant, I feel like Anthony and George will boost his legacy. He will still be able to bring down a solid of number of rebounds per game, and the assist rate should skyrocket with his new teammates, but what about his points?

Don’t confuse yourself, this is still Russell’s team. He loves Oklahoma, and they love him right back. He will score due to his crazy, almost rage-like style of play. Every time he attacks the rim, he looks like he is going to break it. His jumpshot has improved, as it had to last season with him being the primary source of offense for the Thunder. I don’t see him averaging 31.6 points like he did last season because he doesn’t have to if he wants to win this season. I see him averaging 26+ points at the end of the season, and I see his assist average go up about 2 digits; he has weapons other than himself now.

I also forgot to mention that Russell Westbrook got PAID last month. He signed a 5-year deal worth $205 million. Talk about fat pockets! This ended the speculation that Russell would head to another team after this season. This would’ve changed the landscape of the NBA once again, and also crush the hearts of Thunder fans, once again.

Russell stated shortly after news of the deal broke out,“I am so honored to have the opportunity to continue my career here with the Thunder. From day one the support that Mr. [Clay] Bennett, Sam [Presti], Troy [Weaver] and the entire organization have given me and my family has been incredible, and we are so grateful. When you play in Oklahoma City, you play in front of the best fans in the world, I’m looking forward to bringing everything I’ve got, for them, this city and for this organization. WHY NOT?”

As a fan, I gained a lot of respect for Russell after this statement. Don’t get me wrong, I already had a lot, but the loyalty he’s shown to OKC is something to admire and that all sports fans could respect. Oh, I also forgot to mention, he signed the deal on Kevin Durant’s birthday. Whether or not it was coincidence, it sure adds to the fire of the KD vs Russell rivalry.

All in all, I think the Thunder have a great chance to do some damage in the already competitive Western Conference. It will take some time to find the right mixture of the ‘OK3’, but when they find the right recipe, WATCH OUT. I predict that they will end up being about a 46-47 win team, which isn’t the greatest win total, but it should be enough to get them in the Playoffs, where they will do the most damage. I see them giving the Warriors a hard time in the regular season, which I will enjoy greatly. This team and the potential excites me, but also scares me at the same time.

If the team doesn’t reach the level of success that is expected, I see George leaving and uniting with Lonzo as Laker. I see Carmelo staying until his deal is over, but then leaving town, or the game. If they do succeed expectations, I see George sticking around and I see the Thunder being contenders for a couple years to come.

At the end of the day, all I’m hoping for is that the Thunder can get staple wins against the Warriors, Rockets, and T-Wolves. If they can do that, then the NBA Postseason will be something spectacular.