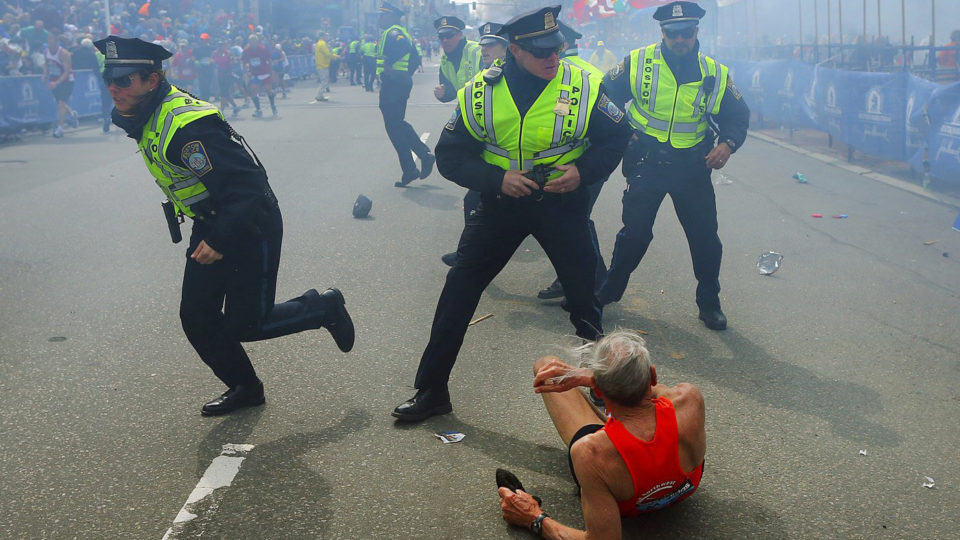 If you listened to Wednesday’s episode of Sports Squawk, I spoke about the pageantry of Patriots Day in Boston, in conjunction with Monday’s bombings at the marathon. Here is the transcript of what I said:

When I was in the 6th grade, my elementary school class took a field trip, from our town in Marblehead, Massachusetts to Lexington. We woke up at the crack of dawn to watch actors reenact the Battle of Lexington and Concord, which took place April 19, 1775.

What made that battle so famous was that, aside from being the battle that began the Revolutionary War, the Colonial militia was prompted by a night ride by Paul Revere, to alert the men that the British were coming.

Patriots Day in Boston, the third Monday of April, remembers that fateful spring morning, a day that changed the course of the history of mankind.

You see, Patriots Day in Boston is arguably our proudest, happiest holiday. Kids are off from school, moms and dads home from work, it is a day to spend with loved ones watching the special 11 am Red Sox game, in conjunction with the 26.2 mile Boston Marathon, the oldest and most historic of these iconic road races.

Patriots Day is a joyous festival, celebrated by people flocking to Boston internationally or local families, each with their own rituals and traditions, like a family spot on the marathon route, which travels from Hopkinton to Boylston Street, in the heart of the “City upon a Hill”.

Aside from the physical damage of Monday’s bombings, which was immense and horrific, the psychological effects from it are just as significant for an entire region. To add onto the thought made by former Patriots linebacker Teddy Bruschi who spoke on ESPN on Monday, the 4-hour mark of the marathon is, in his and my mind, the pinnacle of the spirit of Patriots day.

Many of the runners crossing the finish line at that point are running in support of numerous causes, whether it be for stroke, cancer, diabetes, autism. It’s people who set aside parts of the year, gathering donations for their success for researchers to find cures for our world’s deadliest diseases, aside from the massive undertaking of preparing for a marathon during the New England winter months.

That’s not even including the immense thrill of crossing a finish line due to that work and preparation—a feeling not felt by over 4,000 marathoners who could not finish the race once Boylston Street and its surrounding areas were blocked off.

There is a quote from Mr. Rogers, that has resurfaced following the shooting in Aroura, Colorado, at Sandy Hook Elementary School and now in Boston. He said, “When I was a boy and I would see scary things in the news, my mother would say to me, “Look for the helpers. You will always find people who are helping.”

In each of these three tremendous tragedies, Mr. Rogers has been right. Every picture of the blasts near the finish line there are dozens of people—law enforcement or civilians—running towards the explosions.

The number of doctors and nurses bursting on the scene, the number of blood donations and helping hands, all directly after finishing 26.2 miles of exhaustion and tremendous tests of will. THAT is the kind of people that are sewn in the fabric of America. In Boston and around the nation, you will always find the helpers.

Someone tried to take away that moment Monday, and even if they are found, justice will never truly be done. We mourn for those who lost their lives in this senseless act, and pray for the healing for those wounded.

To borrow from the words of my father, who ran 10 straight Boston Marathons for Children’s Hospital from 1998 through 2007, may their lives be a blessing, their families consoled, and their legacies a better world.