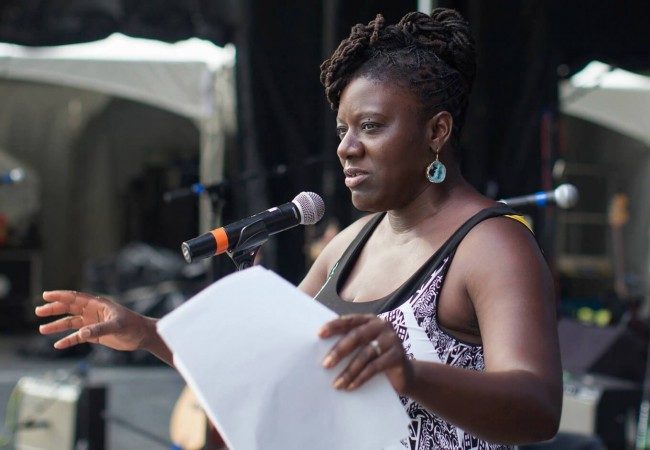 RADinc. hosted an amazing presentation by author and poet Tameka Cage Conley, who is also a graduate fellow in the Iowa Writer’s workshop. It was an intimate setting—all thirty of us sat in a close semicircle around Dr. Conley, surrounded by vivid wall art. As soon as the event began, the lights shut off, leaving us in the dim darkness that was filled with Dr. Conley’s strong, riveting voice.

The label “presentation” does not do justice to the thought-provoking, visceral, and passionate experience that this was.

She read the draft of her essay “Freedom Is a Feeling on the Tongue,” which concerned communicating the pain and difficulties of being African American in America—a “discursive symphony of Black pain,” in her words.

She focused the essay specifically on the words of Valerie Castile, the mother of Philando Castile, who was shot to death by a police officer in Minnesota last year.

Quoting Martin Luther King, Jr., she first mentioned the difficulties and paradoxes of explaining one’s experience to someone else through the medium of paper, and staying true to what is said on such a medium.

She highlighted the disparity between her academic voice, and natural voice, two different speech registers that do not always comfortably coexist. Quoting Nina Simone, she then stressed the obstacles faced in merely telling someone about things they simply cannot know—and yet, all that is left are words.

More specific to current events, Dr. Conley described what it’s like to be a mother, to have a mother-son bond, and to realize a willingness to do anything for the sake of that child, and then to lose that child in the worst way possible. And so what can we say about Valerie Castile’s outburst of fire after the policeman who shot her son was acquitted?

She had lost her son, her family was torn apart, and she had nothing left but her words. Dr. Conley read to us the entire Facebook post that Valerie Castile had written, filling the air to the point that you could almost feel the words in your own veins.

She then invited the audience to imagine a world “without the collective Black heart,” producing a very long list of every good thing that this world would miss, including “no sweet potato pie done rightly.” Ultimately, she said, “if the universe is a luminous black thing, it is a reflection of the Black heart.”

Then, turning to the white members of the audience, she added that dealing with White supremacy is not a matter of a safe “I and them” type of distance; instead, she urged to “go get your people,” and deal with it from the inside out.

A Q and A session followed—and this was the most heartfelt and engaging Q and A that I have ever witnessed. After thanking Dr. Conley for making the audience feel loved, the mediator then invited the rest of the audience to express how they felt. Among the words shouted out were “helpless,” “relieved,” “acknowledged,” and then again, “loved.”

Dr. Conley and the audience members tossed around more heavy topics. One of these was what equality actually means—I had never really considered how equality is based on a “you are equal to me” type of skewed reasoning, which does not result in an equality at all.

Another question dealt with what it’s like to communicate the Black experience in art and literature through companies and institutions that are all-White; another individual described it as “titillation.” Also pointed out was how Dr. Conley smoothly embraced any possible audience, including a White audience (of which I was very much a part).

Her response, which I thought very inspiring, was that now she believes it effective for people (White people, specifically) to be uncomfortable and to embrace this discomfort in the face of perspectives, voices, and emotions that we have never experienced before. She ended by stressing that freedom is constructed on an individual and moment-by-moment basis—what is important is that people keep trying.

This was a presentation that you could feel—I kept getting chills throughout the entire experience–and a presentation that I could never give justice to in a summary. It questioned your most latent assumptions, and nearly every word that Dr. Conley uttered stirred something deep inside of you, which I will solemnly attest is not an exaggeration.