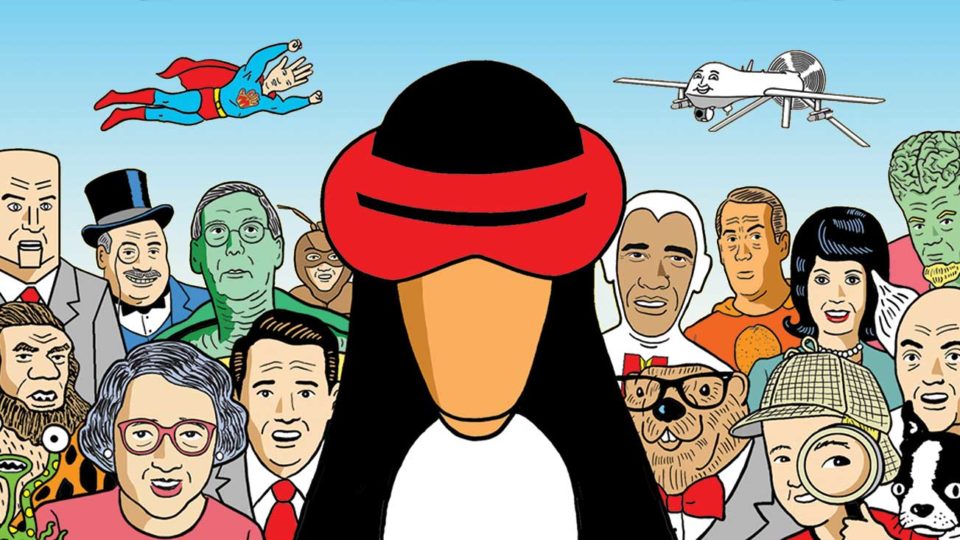 Dan Perkins was raised in a house on Hudson Avenue and attended Roosevelt Elementary. As a teenager, Perkins worked in a movie theatre concession stand.

Perkins took a job at Zephyr Copying, which exposed him to reproduction technology. He began to, “mock ridiculous over-the-top advertising,” by drawing ads for Zephyr and putting up fake movie posters around the Pedestrian Mall. This helped him find his own style as a cartoonist. His first comic was featured in the Des Moines Register.

Perkins drew inspiration from advertising magazines he bought from a thrift store on Linn Street. Advertisements promoting rampant consumerism intrigued Perkins the most. It would later be the essence of his weekly comic strips This Modern World launched by San Francisco based Processed World.

As a political cartoonist, Perkins feared that radical office workers would be blacklisted. He adopted the infamous pen name “Tom Tomorrow.”

This Modern World featured characters such as a sunglass-wearing penguin called “Sparky” and a black and white Boston terrier “Blinky.”

His protests on Gulf War, post-September Eleventh Nationalism, Middle Eastern terrorism, presidential candidates, and consumerism, are satirical, topical, and truthful. His recent effort toHis recent effort to caricaturze Trump posed an issue. He stated, “How can you caricature a caricature?”

His protests on Gulf War, post-September Eleventh Nationalism, Middle Eastern terrorism, presidential candidates, and consumerism, are satirical, topical, and truthful. His recent effort to caricaturize Trump posed an issue. He stated, “How can you caricature a caricature.”

Perkins has seen his cartoons published in major publications such as The New York Times, The New Yorker, Esquire, and The Economist. He called his brief animation deal with Saturday Night Live a waste of time

In 2008 his career took a crash with the recession. Soon after, Eddy Vedder, frontman for Pearl Jam, asked him to submit cover art for their Backspacer album. Perkins stated that this altered the direction of his career. As a two-time recipient of the Robert F. Kennedy Journalism Award, recipient of the Herblock Prize for editorial cartooning, and a 2015 Pulitzer Prize Finalist, Perkins has transformed This Modern World from an alternative press weekly comic to a global sensation.

Perkins was nominated for a Pulitzer Prize, “for cartoons that create an alternate universe—an America frozen in time whose chorus of conventional wisdom is at odds with current reality.”