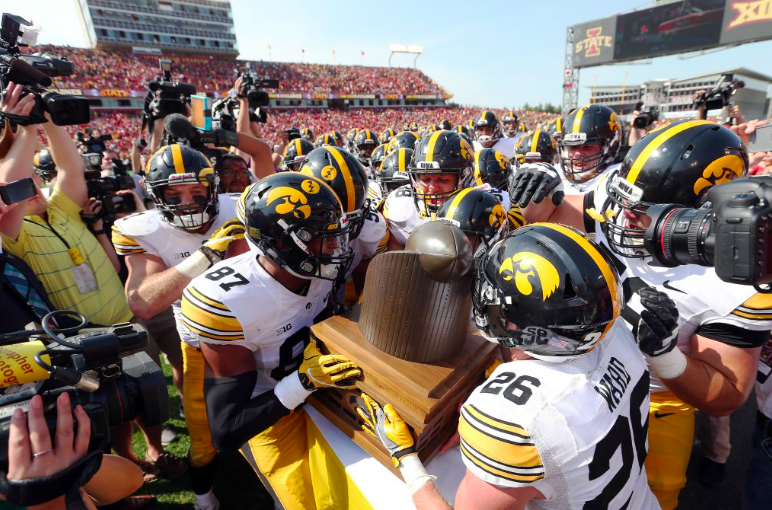 Whether you bleed back or you bleed cardinal, this year’s Cy-Hawk game was one for the books.

It wasn’t easy, but the Hawkeyes were able to escape Jack Trice Stadium with a 44-41 overtime victory Saturday. Freshman receiver Ihmir Smith-Marsette caught the game-winning touchdown pass in overtime to help the Hawkeyes fend off a scare in Ames.

The Hawkeyes led 14-10 at halftime thanks to a pair of touchdown passes from Nate Stanley. Nick Easley and Matt VandeBerg were on the receiving end.

Out of halftime, the Iowa offense rolled down the field on a 94-yard drive that was capped off by an Akrum Wadley one-yard rushing touchdown. Iowa led 21-10, and the offense was looking good.

Iowa State never gave in. On each of their next three drives, the Cyclones found their way into the end zone.

David Montgomery led the charge for the Cyclones on the ground. He finished with 112 yards on 20 rushing attempts and a touchdown run. His seven-yard touchdown put Iowa State up 31-21 with 11:46 to go in the game.

The Iowa offense had been stagnant, but a switch flipped on again on the next possession. The Hawkeyes started at their own eight-yard line, but Stanley led the troops down the field for a score. The drive was capped by Smith-Marsette’s diving grab from 15 yards out, making the score 31-28.

The ensuing Iowa State drive, Parker Hesse picked off Jacob Park to set Iowa up at the Iowa State five-yard line. The Cyclone defense held Iowa to a field goal, tying the game at 31 all.

As if the momentum had shifted enoug, the Cyclones made sure to get Jack Trice rocking again. Jacob Park his Hakeem Butler for a 74-yard touchdown pass to put Iowa State back up 38-31 with five minutes remaining.

After trading punts, the Hawkeyes got the ball back with three minutes on the clock.

That’s when Akrum Wadley took matters into his own hands.

With a minute on the clock, Wadley caught a short pass from Stanley and scampered his way downfield for a 46-yard touchdown pass to tie the game.

“I could hear the sideline yelling ‘get out of bounds’ because we were in two-minute drill,” Wadley said. “I was tired. Noah (Fant) just caught a first down, he was tired. We had to have it, I was trying to score.”

The electric play sent the game to overtime. Iowa won the toss and chose to play defense first. The Hawkeyes held Iowa State to a field goal, giving them a chance to win it with a touchdown.

They did just that.

Smith-Marsette made another diving grab to give the Hawkeyes a 44-41 victory, giving Iowa three straight Cy-Hawks wins, and three straight wins in Ames.

“The last play was something we have been practicing hard in practice,” said Smith-Marsette. “It is a play that we know if we have something, we can go to it.”

Smith-Marsette caught four passes for 36 yards in the game, just one week after fumbling on his first college touch against Wyoming.

“He’s got a little spirit to him that we really like,” said Head Coach Kirk Ferentz. “He seemed like the kind of guy that could shake that off.”

Fumbles, especially for younger players, seem to result in limited paying time, but the coaches went right back to their freshman receiver one week later.

Smith-Marsette helped lead the charge through the air, but he wasn’t the only one making plays. Nine different Hawkeyes caught at least one pass in the game as Stanley threw for 333 yards and five touchdowns.

“Last week, you probably noticed, he looked pretty tight at times,” Ferentz said. “For him to play the way he played in this environment says a lot.”

Stanley has now thrown for eight touchdowns in his first two games at the helm of a “run first” offense. In Saturday’s win, he led four touchdown drives of 89 yards or longer.

Wadley’s presence was felt in his final Cy-Hawk game. Wadley tallied 269 all-purpose yards on the day – 127 on the ground, 72 through the air, and 70 on kick returns.

It seemed as through the Cyclones were well on their way to reclaiming the Cy-Hawk trophy, but the fourth quarter did not go exactly as planned.

“At the end of it, they made those different plays to win the game,” said Iowa State Head Coach Matt Campbell. “That’s really what it comes down to – some critical situations and moments.”

The Cyclones outplayed Iowa for nearly the entire football game, but came up a play or two short. Montgomery finished with 164 yards of total offense and a touchdown, while Allen Lazard and Hakeem Butler combined for 151 yards and four touchdowns.

“Both teams left everything they had out there,” Ferentz said. “We’re really pleased to come out of here with a win.”

Iowa (2-0) will host North Texas at Kinnick Stadium next Saturday at 2:30pm CST.